*Nita was born in Puerto Rico and adopted by American missionaries. With a desire to learn more about her Puerto Rican heritage, Nita contacted Legacy Tree Genealogists. We share her story of self-discovery with client permission

I was born in the mountainous region of Puerto Rico and adopted by American missionaries when I was 2 weeks old.   My biological mother died from complications 2 weeks postpartum which left my biological father with 7 children whom he could not take care of.  My adopted mother was a nurse in the rural hospital where I was born and heard of a 2-week-old baby whose future was in jeopardy. After learning that there were also 6 other children who had no mother, they proceeded to adopt me and considered taking in 3 of the youngest siblings.  It took much negotiation and conversation between my American parents and my Puerto Rican father who needed assurance that his 4 youngest would be well taken care of. Nearly 3 years later my sister and I were officially adopted and my 2 brothers were taken in as foster children. 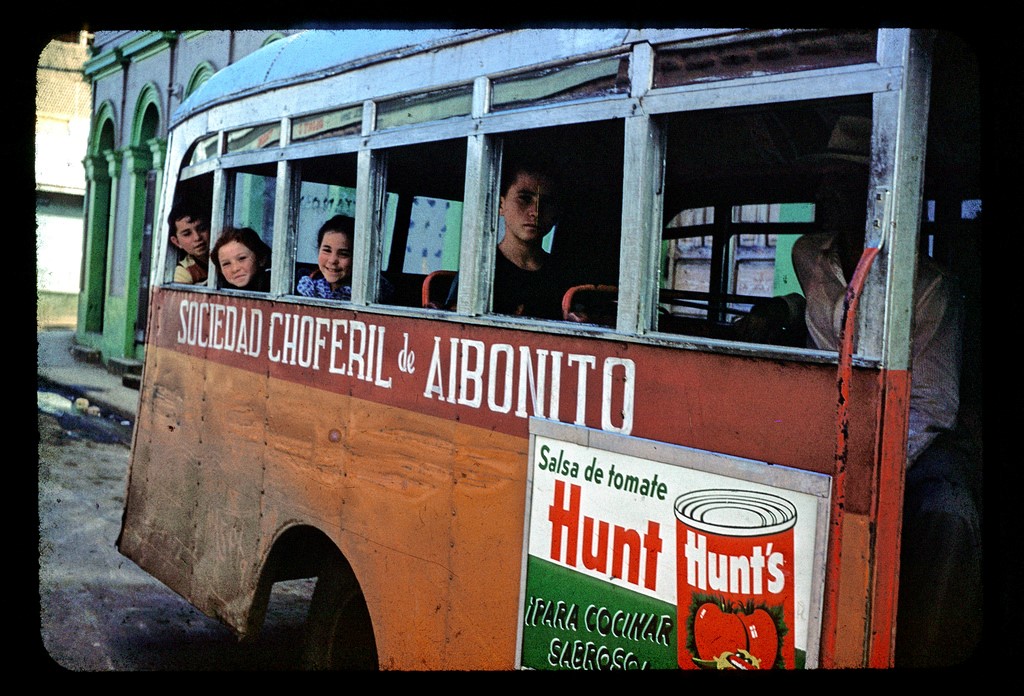 Picture taken by Nita’s American father right before a bus ride. This was a typical form of transportation in the early 1950s. The four children on the bus are Nita’s biological siblings, all adopted by the American parents. Nita is the dark-haired girl with the blue dress. 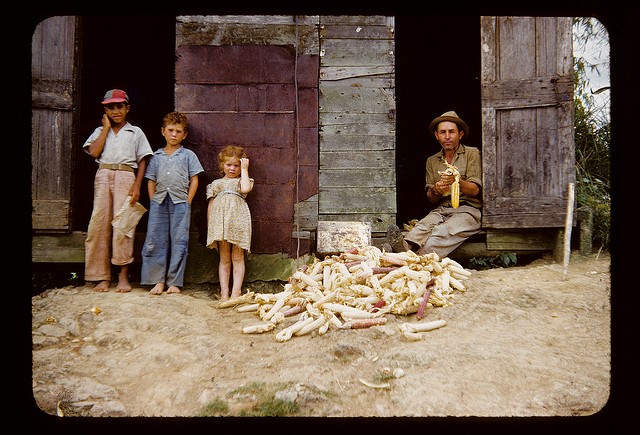 Clients biological father, Manuel Leon, husking corn. Alongside him are two of the client’s biological siblings, the two shortest children.

But that was all I knew. I knew very little of my Puerto Rican heritage or ancestry, so I decided to join MyHeritage and have my DNA tested. While waiting for my DNA results, I pursued my own research to see what I could learn. I quickly realized that researching was not as simple as I thought it would be.  I thought I found my father and mother in the 1940 US census, did some guessing on birth dates and places on the island and figured I was on the right track.  I had my birth certificate and adoption papers, as well as copies of birth certificates of my siblings.  I became more confused when I noticed that the surnames on 2 of the birth certificates showed discrepancies. More research created more questions and I became frustrated.

Answers in my DNA

My DNA results arrived and I was surprised to learn that my ethnicity estimate included Iberian, Italian, North African and Central American blood lines. With such a mix, it was clear I needed help to know where to go next.  I submitted all of my personal findings to Legacy Tree Genealogists, hoping they could help me solve the puzzle of my heritage, once and for all. 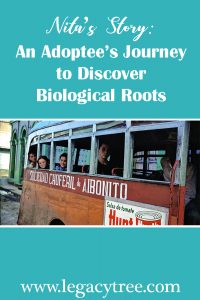 Legacy Tree Genealogists researchers discovered 2 people with the same name as my biological father along with many similarities that caused confusion.  We learned together that I had the wrong birth and death dates (again from my lack of knowledge and best guess). After contacting a niece of mine, we confirmed birth and death dates for my Puerto Rican father. I could have easily gone down the wrong path, but thanks to the Legacy Tree researcher, I now know who my paternal grandparents and great-grandparents are. I had no idea that my paternal grandparents had 11 children and that my grandfather’s first name was Fructuoso.  Fructuoso in Spanish translates to ‘fruitful’ and it appears he certainly was!

I have learned that I may still have aunts, uncles and many cousins in Puerto Rico that I have never met and would like to.  On my maternal side, Legacy Tree Genealogists showed that if children were not registered with the federal government, it is difficult to find information, but the need to check Catholic parish registries for baptisms, marriages, and burials of my ancestors will be necessary.  I would not have known that the Catholic parish registries is an option, nor that the Family History Library in Salt Lake City has records that have been microfilmed and digitized and go back as far as 1854 for baptisms and 1826 for burials.  I still want more information on my biological mother and her parents and will continue to work with Legacy Tree to help me find this information.

I am now realizing how important it is to pass the information about our Puerto Rican heritage on to my children and grandchildren. They know they have Puerto Rican blood lines and now they are even more interested in their DNA results.  It is a gift and an honor to pass on my heritage and I smiled with pride when my grandson shared my story for an assignment with his 6th grade Spanish class.

The Research Behind the Discoveries – Legacy Tree Genealogists

Nita came to Legacy Tree Genealogists to find her biological parents. She knew their names as Manuel Leon and Dolores Vasquez both from Puerto Rico. The client was adopted in 1953 by an American family. The client had her birth and adoption records but wanted more information about her Puerto Rican family. With this starting information we began our search.

We discovered Dolorez Vasquez death record which listed her husband and her parents. We learned she died of a pulmonary embolism a few days after the client’s birth. Nita now knew that her grandmother had lived with her parents during the 1940 U.S. census since the same information was provided on the census record.

In our search for Manuel Leon we found two men with the same name and born in the same year. Based on the birth date Nita’s niece was able to provide, we determined that the ancestral Manuel María Leon was born 9 May 1908 in Cayey. With this information we were able to identify his parents as Fructuoso Leon Figueroa and Julia Arguinsones/Arguinzoni. Manuel died 6 April 1990 at the Centro Medico Wilma N. Vasquez (hospital) in Vega Baja on the northern central coast of the island. His death certificate confirmed his relationship as widower to the client’s biological mother, Dolores Vasquez. Manuel listed that his wife was born in Cayey, a Puerto Rican municipality just east of Aibonito and south of Cidra. The couple lived in the barrio of Salto in Cidra in 1949, but Dolores’ death took place in Aibonito.

In 1935, Manuel was enumerated on a Puerto Rican census with his parents in barrio Honduras of the Cidra municipality. Manuel’s father was Fructuoso León y Figueroa. He was 60 years old at the time of the census. Fructuoso was employed as a farmer on a tobacco plantation, as were three of his four sons including Manuel (the client’s father). Julia Arguinzoni de León was his wife and stayed at home with the children. In addition to Manuel, the couple had five more children. Prior to his death, Manuel had been employed as a machine operator at a factory and had resided in Vega Baja. Manuel’s own death was the result of cardiac arrest at age 81. 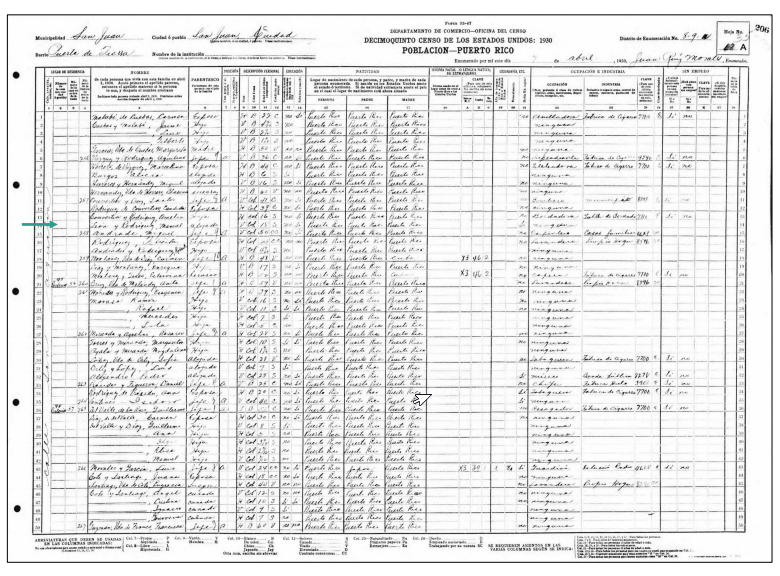 By carefully examining census records, civil registrations, Social Security applications and draft registration cards we were able to piece together the lives of Manuel and Dolores and provide our client with information on several generations. Nita now knows places her family lived, their occupations, names of her parent’s siblings, and more. We are excited for Nita and hope she continues to learn more about her Puerto Rican heritage and family history.

If you’re looking for answers to questions about your family – whether it’s identifying and finding biological family members who are still living, or breaking down a brick wall you’ve been working on for years – our experts have the knowledge and expertise to walk you through the process every step of the way. Contact us today for a free consultation.

Previous article: Where IS That Record? Clues for Tracing Irish Ancestry
Next article: Picking Up the Trail: Following Your Ancestors West