*This story is shared with client permission.

Through DNA analysis we are able to gather information regarding individuals’ shared heritage, far beyond the basic haplogroup. DNA testing, combined with thorough genealogy research, has helped clients break through genealogy brick walls including difficult-to-trace ancestors, determining an ancestor’s ethnicity, and solving family mysteries that would otherwise be impossible to investigate due to lack of records. With client permission, we share the following reunion made possible through DNA analysis.

In December 2015, Susie W. came to Legacy Tree Genealogists requesting a DNA analysis to help identify her biological father. Susie lives in Papua New Guinea, a small island country north of Australia, with her husband and six children. Her mother is fully Papua New Guinean. Growing up, Susie always felt that she looked and acted differently from the rest of her siblings. She asked her mother questions about her roots, but her mother always answered that Susie took after her grandmother, whom she never knew. 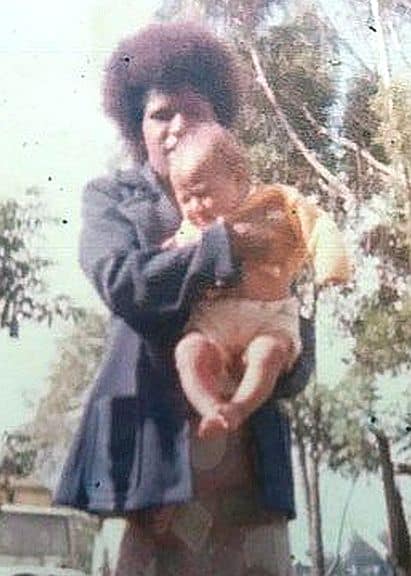 Susie at 4 months old with her mother.

In 1994, her grandfather told her the truth — that she had a different father than the rest of her siblings. Susie, then 16, was shocked and angry. She confronted her mother who confirmed that Susie was the product of a brief encounter with someone who remained unknown. Susie had no name or country to go on. The limited information from her mother was that he was an American tourist working with a Lutheran missionary organization.

For many years after this revelation, Susie searched for more information about her biological father. She left no stone unturned, asking everyone who might know something for clues, but no one knew anything else about her father. She kept hitting a brick wall, and she was quite discouraged. After an exhausting and stressful search, she decided to quit looking.

In 2014, when she heard about DNA testing, she was amazed to learn that a person can find relatives just through a DNA sample. She decided to give it a try. Her results confirmed that her father was of predominantly North Western European heritage. Surprisingly, her closest DNA matches were all British.

When my results were posted around October 2015, I was in for a surprise! I logged in to my account and there was a list of total strangers who happened to be my fourth-to-fifth cousins. For the very first time, I knew where my biological father was from…Europe.

It was an exciting moment for Susie, but she wasn’t satisfied. She didn’t understand how to use her DNA matches to get more information about her father, but she decided she wasn’t going to stop there. She started searching online, and soon she reached our affiliate, MyHeritage.

She enlisted our DNA specialists at Legacy Tree Genealogists to advance her search. As a first step, we located U.K. birth, marriage, and death records, as well as U.K. censuses for her closest DNA matches. This helped determine that the matches were descendants of Charles A. and Louisa V. of Grays Thurrock, Essex, England. We therefore concluded that Susie was also likely a descendant of Charles and Louisa.

One descendant of Charles and Louisa shared DNA with Susie on the X-chromosome. Since the genetic cousin had no ancestry from Papua, New Guinea, we assumed she shared DNA with Susie on her paternal X-chromosome. Therefore, Susie descended from Charles and Louisa through her paternal grandmother. In turn, Susie’s paternal grandmother was a granddaughter of the couple.

One of Susie’s other close genetic cousins had no shared DNA with Susie’s other relatives. However, she only had a single line of ancestry from the U.K. A single couple was narrowed down as the likely ancestral candidates of the cousin, Charles P. and his wife, Mary.

Having identified two couples who were likely among Susie’s ancestors but not related to each other, the descendants of each couple were traced. We searched for marriages and relationships among the descendants of the respective families. Finally, a granddaughter of Charles and Louisa was found to have married a grandson of Charles and Mary P. This couple had two sons, either of whom could be Susie’s father!

Susie was ecstatic. She contacted the younger son and his daughter in England and discovered that, while he had never been to Papua New Guinea, his elder brother had. A Legacy Tree Genealogist in Australia joined the effort to locate immigration records for him. These records revealed that the elder brother had a daughter who lived in Queensland, Australia.

Susie reached out to her half-sister in January 2017, and although her sister was quite surprised by the news, she was also excited. They exchanged information and photos, and the half-sister couldn’t believe Susie’s resemblance to their father. The two arranged to meet.

The reunion was so emotional. We connected instantly and talked for hours. It was as if we had known each other forever. The feeling was remarkable, embracing each other for the first time in 40 years and shedding tears of joy together.

Since this meeting, the relationship between Susie and her father, Chris, has been confirmed through a MyHeritage DNA test. They’ve been in contact and Susie has learned of another half-sister as well. 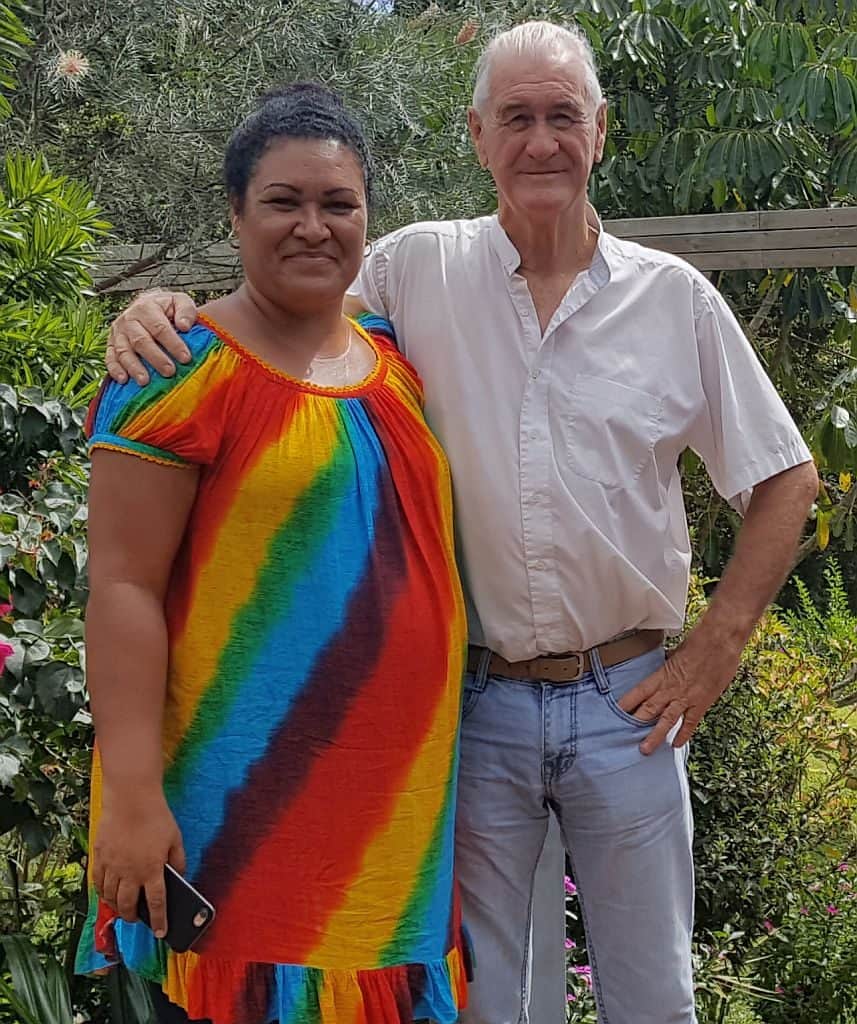 Susie and her biological father meeting for the first time.

Our lives have changed now that we are family. We are excited to create new memories together with our children. My older sister’s kids are excited to meet me and my children and vice versa. We are looking forward to a big family reunion soon.

When she started her research, Susie was looking to find more information about her heritage and to get a sense of closure.

It turns out that my findings developed into something beautiful. My dad accepted me as his daughter. I gained two new sisters, a niece and a nephew. I’ve also learned the names of my paternal grandparents, great-grandparents and great-great-grandparents.

After a search of over two decades, Susie finally feels complete.

I have found my family and was finally able to get the closure that I so needed through MyHeritage and Legacy Tree Genealogists. I want to tell others who have open questions like me to never give up hope. When there is a will, then there is a way.

The first I knew about Susie was when my eldest daughter, who is also of Papua New Guinea (PNG) mixed-race heritage, rang me and said she had been contacted by Susie who claimed to be my daughter.

Having lived in PNG for over 20 years, I did not doubt that it was entirely possible given my lifestyle during the 1970s.

I had no concerns about the matter and gave Susie my email address. Over the course of a number of email exchanges she explained how she had located me by firstly discovering from a DNA test that her father was British and then engaging Legacy Tree Genealogists to advance the search.

While not denying I was her father, I did not initially believe it was possible to locate someone’s parent without having DNA samples of both parties.  I therefore asked Susie to send me the research that she had received.

After carefully reading the research documentation, I was very impressed with the methodology and surprised that such a process from one DNA sample was possible. I came to the conclusion that Susie was in all likelihood my daughter.

I sent her a photo of me in PNG in the year she was born which she showed to her mother. The reply was “Yes, that’s him.” At that point, it was obvious that my parenthood needed to be confirmed and I provided a DNA sample to MyHeritage that showed that I was clearly Susie’s father. It was then that we spoke on the telephone and Susie was fairly emotional to hear my voice for the first time.

It is interesting to note that about 15 years ago I spoke to a psychic who told me I had three daughters, to which I replied that I only had two!

We eventually caught up with each other (she had already met my eldest daughter) during one of her trips to Australia when she came to my home to spend the day with her “new” family; namely me, my partner, her sister, and her niece and nephew. We met for lunch in town the next day and just the two of us had morning tea together a few days later before she returned to PNG. 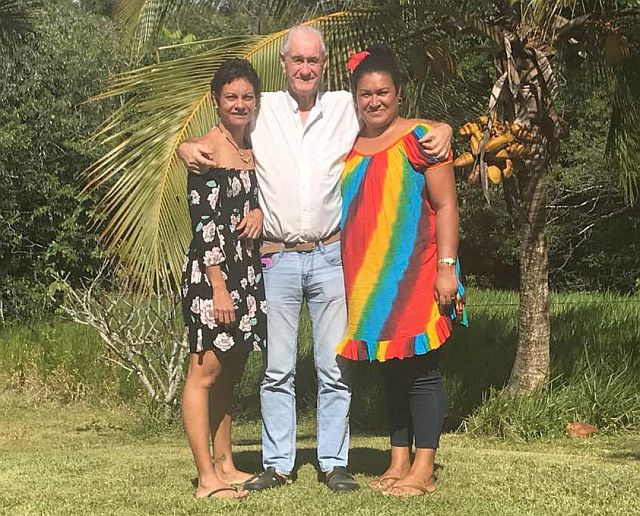 Chris and two of his daughters.

We have shared stories about PNG and it turns out that for several years in the 1980s Susie and her mum were living only a short distance from me when I was working in the Highlands of PNG and moved to the same town a year after I had moved on. Her sister-in-law even worked for the family whose daughter was married to my best friend.

My youngest daughter (who is overseas) and Susie have since made contact and had a long chat, and all three of them maintain contact on Facebook. I am particularly happy for the children, especially my eldest daughter who lost her mother to liver cancer when she was only 26. I feel she has missed her connection with her PNG roots since her mum died and now having a PNG sister has re-established that bond. I am also happy for Susie that she has found her dad.

As an aside, I also found it very interesting and informative while reading the research to follow the genealogy through my mother and father’s family trees. Seeing the names of my grandparents’ brothers and sisters who I only met on rare occasions when I was very young brought back some childhood memories of old ladies dressed in black sitting around in old Victorian parlours.

Gathering families. It’s what we do at Legacy Tree Genealogists. Rapid advances in DNA analysis over the last several years have made miraculous discoveries possible for families around the world. We are honored to have played a part in this family’s reunion. We’d love to help you as well. Contact us today!

Previous article: Getting Started With Australian Genealogy: What You Need To Know
Next article: Legacy Tree Genealogists Named to MountainWest Capital Network’s 2017 Utah 100