We frequently have clients contact us wanting to know, “How do I prove a family legend is true (or untrue)?”.  In this article, we highlight research that was completed to find out whether the family legend of an ancestor serving in the American Revolutionary War is fact or fiction. 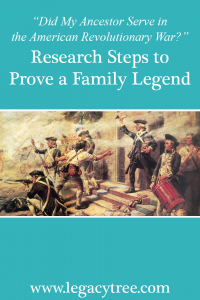 Many of us want to learn about our ancestors’ lives, and this is a key motivator for completing family history. Yet some people also want to know what role their ancestors played in history, and if certain noteworthy events occurred in their lives, or perhaps even a royal connection exists. In fact, many of our clients come to us with oral family history stories – what some call “family legends” – and seek our help in proving or disproving these stories.

Recently one of our clients found herself in that same situation. She wanted to determine if her ancestor, Samuel Megginson, had truly served in the American Revolutionary War. I’ll review her particular case to illustrate how to approach proving or disproving a family legend, and what record collections may frequently be used.

Clearly, the first step is for us to find corroborating evidence that helps support the claims made in the family legend. This particular story included some specific details such as a Dr. Cabell setting Samuel’s broken arm in or around 1760. Specific details can either mean the story has a basis in fact or that it’s been retold within the family so much that it’s essentially just accepted without proof. Therefore, our evidence-finding should center around the specific details which our client shared.

We began our research by performing an internet search for “Samuel Megginson broken arm”. The most promising hit was a Find-A-Grave memorial for Samuel Megginson created by a Dr. Gresham Farrar. Dr. Farrar had previously researched Samuel’s life. He identified an extensive, compiled genealogy titled Virginia Cousins: A Study of the Ancestry and Posterity of John Goode of Whitby, A Virginia Colonist of the Seventeenth Century, with Notes Upon Related Families, A Key to Southern Genealogy and a History of the English Surname Gode, Good, Goode or Good from 1148 to 1887. This particular book did mention that Samuel’s arm was broken and set by old Dr. Cabell.

G. Brown Goode, Virginia Cousins: A Study of the Ancestry and Posterity of John Goode of Whitby, A Virginia Colonist of the Seventeenth Century, with Notes Upon Related Families, A Key to Southern Genealogy and a History of the English Surname Gode, Goad, Goode or Good from 1148 to 1887 (Richmond, VA: J.W. Randolph & English, 1887), pp. 69–70, books.google.com

Although the book included no reference or citation to the source of the Samuel Megginson entry, we were able to document that this was part of the family story. Here’s how. Dr. Farrar’s memorial mentioned that Samuel received 243 acres of property in Buckingham County, Virginia, from the lieutenant governor of the colony on 14 July 1769. The document that Dr. Farrar referenced to prove the land grant is located in the Special Collections Research Center at the Earl Gregg Swem Library at the College of William and Mary in Williamsburg, Virginia.

Dr. Farrar had already found Samuel Megginson’s military service records. The first record was one regarding Captain Nicholas Cabell, who organized a company in the spring of 1776 that drew men from Amherst County and surrounding areas. Samuel, his brothers William and Benjamin, and their brother-in-law William Horsley, all enlisted in this minuteman militia company as privates. Samuel served from 25 May 1776 until 12 September 1776—right at the beginning of the American Revolutionary War. During this time the company marched “to Manchester, Jamestown & Williamsburg” and “did not return until late in the month of September [1776]”. Samuel’s brother William died during these campaigns, on 31 August 1776.

We did some more digging to learn more about Samuel’s life. We determined that Samuel was in Virginia until at least 1785, when he was taxed there in Amherst County, and was in Montgomery County, North Carolina, by 1800 and there until 1815, when he signed a deed giving much of his property to his son, also named Samuel.

We continued studying Dr. Farrar’s notes and noticed what he wrote concerning the ancestry of Samuel Megginson, Sr., that “there is no ‘direct’ evidence proving” the relationship between Samuel and his father William Megginson. However, Dr. Farrar was able to compose an extensive genealogical proof summary that was accepted by the Jamestowne Society as proof of the parent-child relationship between Samuel and William. Samuel’s mother was Mary Goode whose lineage had been proven back to Jamestown, Virginia! Given the client’s interest in historical context, we wanted her to have this information about Samuel’s parents. We asked the Jamestowne Society to please send us a copy of Dr. Farrar’s genealogical proof summary. They would not, but they did forward the summary of Dr. Farrar’s application for membership, which verified Samuel Megginson was the son of William Megginson and Mary Goode. Also, it gave each generation from Samuel Megginson to Christopher Branch, a famous Jamestowne figure. If our client chooses to join, she qualifies for membership into the Jamestowne Society. Learn more about the requirements for membership in the various lineage societies in our article, Hereditary Societies and You.

A Legacy for Future Generations 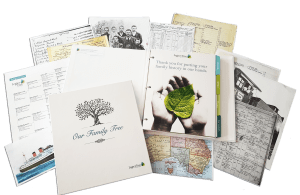 It can be so fulfilling to learn of your ancestor’s historical legacy. This particular client was pleasantly surprised and wrote us to say: “My report arrived today and it is so very interesting! I love the connection to the revolutionary war and am amazed by it.” The client had not known her ancestral connection to Jamestown, Virginia or that she was a descendant of Christopher Branch. She now has a (documented!) legacy to pass on to her children and grandchildren.

Need help with your research? Uncertain how to negotiate fact from fiction? Contact Legacy Tree today for a quote!