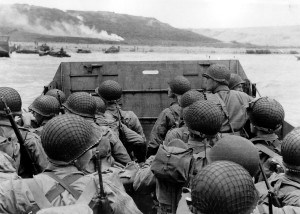 Are you looking for a way to honor your American military ancestors this upcoming Veteran’s Day? How about using historical records to learn about them and their service? Throughout various repositories and websites, there are many different collections spanning many conflicts that you can use to find your soldier-ancestor. From the Revolution to World War II, chances are you had a family member that served – and you can find record of him! Here are some quick – but by no means comprehensive – ideas for performing military research.

The options are myriad and some are more easily accessible than others. For example, during both World Wars, young men had to register for the draft. Obviously not all who filled out a card ended up serving, but they can be a fascinating resource for researching any man of appropriate age in your tree. Found on FamilySearch.org, Ancestry.com, and Fold3.com, these cards contained information ranging from birth date and place, address, employer, and even physical description of the draftee. Search World War I draft registration cards for free at FamilySearch.org.

The Civil War also produced an amazing amount of information – on both sides of the Mason-Dixon. Service records, muster rolls, regimental histories, and pension documents can be rich resources. Pensions in particular are a gold mine. Often when a soldier was injured in the service of his country, he could qualify for a government pension, which was meant to help support him financially. Qualifying for one of these pensions took a lot of time, proof of identity and injury, and affidavits from friends, family, and doctors. As a result, pension files can be hundreds of pages long. The actual packets themselves are only available currently available through the National Archives for approximately $80, but several of the big family history websites contain indexes to help you determine whether your ancestor qualified for a pension. Learn more about the Civil War and give the following databases a try: Civil War Soldiers and Sailors database or U.S. Civil War Pension Index: General Index to Pension Files, 1861-1934.

The War between the States wasn’t the only war to give pensions, either: you can find them for the Revolution and the War of 1812 as well. These sorts of military documents are especially important for that time period, since there are generally fewer historical documents overall. The 1700-1800s for the most part lacked vital records, detailed censuses, county histories, and other record types we rely heavily on for later research. Colonial and antebellum military records are often some of the best sources for details on your ancestors.

Bounty land warrants are also an important source to check. During some of the earlier years of the nation (colonial through just before the Civil War), soldiers were often paid for their service in land. Like a pension, the soldier or his survivors had to first apply for the warrant, which he could then apply towards a patent. That patent granted him ownership of a certain piece of land (which he did not typically get to choose) that he could then elect to live on or sell. These too can be accessed through the National Archives for a fee.

And don’t forget newspapers! My own grandfather was a WWII vet who served as the commanding officer of several POW camps in Indiana and Ohio. I learned most about his service there from the articles I found about the camps written by the local newspapers. Obituaries will often also give details about a man’s service, including his regiment and any important battles. Newspapers can be found in many places, such as NewspaperArchive, Newspapers.com, Elephind, the Family History Library, and local libraries and genealogical societies.

Finally, don’t neglect the smaller conflicts. We don’t talk as much about the Spanish-American War, Mexican War, and various frontier Indian disturbances. Your ancestors may have served in these as well, even if they did not participate in the more famous ones.

With this short article, we haven’t even scratched the surface of what’s out there. If you’re interested in learning more about how to do military genealogical research, here are a few resources:
• FamilySearch Research Wiki
• This article by Kimberly Powell on military genealogy
• The Source: A Guidebook to American Genealogy by Loretto D. Szucs and Sandra H. Luebking (it has a very helpful chapter on military research, but covers many other topics as well. A must-have reference book for the serious genealogist!)
• U.S. Military Records: A Guide to Federal and State Sources, Colonial America to the Present by James C. Neagles.