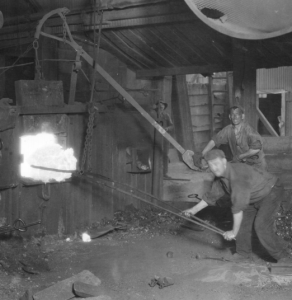 I recently had a project come across my desk where the client wanted to learn more about his father’s life during a 5-year time span that he was in the United States.

Unfortunately he arrived and departed between census records, so there was no way to locate him in the U.S. that way. However, by locating him on a passenger list we were able to learn the specific street address, city, and state he was headed to. Even with that information, he couldn’t be found in any available records, including city directories. However, when we used the information we did have – where he was from, his occupation, where he was headed – we were able to locate an article that talked about his exact situation. The article mentioned that people from his specific origin country came to that specific town during that specific time period to work in the steel mills. We then used maps to determine where each steel mill was located at that time (in the early 1920s), and when those were compared to his known address, we were able to determine which mill he likely worked in. Once that information was found, we were able to locate photos that were taken at that mill during the years our client’s father worked there. While it’s probably unlikely his father is one of the men in the photographs, they show what the day-to-day work would have been like for his father, and the article talked about the local area at that time as well.

This example shows why it is important to look at the historical context of the area(s) and time period(s) our ancestors lived in. In this case, even though we couldn’t find information specifically about the man we were looking for, we were able to paint a pretty clear picture of his life during those 5 years by looking for information about the community around him. There are a lot of records out there to use for this type of search. County histories, newspapers, and city directories are a few of the most available ones, and you can also use online search engines to look for other histories and articles as well.

Sometimes it’s fun to pick an ancestor you don’t know a lot about, find out where they were living at a certain time (census records are good for this), and then learn all you can about what that area was like at the time they were living there. By the time you’re done, you’ll feel you know them better!