Irish genealogy “brick walls” can be daunting, but not impossible to overcome. One of our genealogists shares her advice on extending your Irish family history. 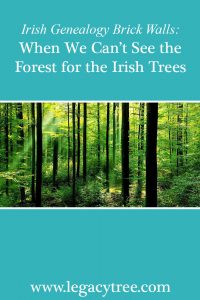 The expression “can’t see the forest for the trees,” is used of someone who is too involved in the details of a problem to look at the situation as a whole. As much as we want to be able to quickly climb straight up Irish trees, it is often impossible without leveraging what the rest of the forest has to tell us. This type of research is called “clustering.” Below are three examples gleaned from the lives of Timothy May (1) and his father (2) and grandfather (3) who bore the same name.

Original Records Can Be Wrong

Don’t just go with the first record that you find. Look for examples of when an ancestor may have self-firmed their parentage. When Timothy May (1) was baptized as an infant in the St. Joseph’s Roman Catholic Church of Douro, Peterborough, Ontario, Canada on 1 October 1862, the entry clearly stated Timothy was the son of Timothy May and Ellen “Maloney.” One of his sponsors was Jeremiah Maloney.

Timothy May was baptized as an adult into another church on 28 March 1903; he self-affirmed that he was born 1 September 1867 [sic] in “Peterboro, Canada,” and was the son of Timothy May and Ellen Mahoney. Both the Maloney and Mahoney families are historically represented in Douro.

We went to the forest to see what Timothy’s siblings had to say. First, we gathered the names and birth order of the siblings of Timothy May through census records, then revisited records in St. Joseph’s to locate their baptismal records. 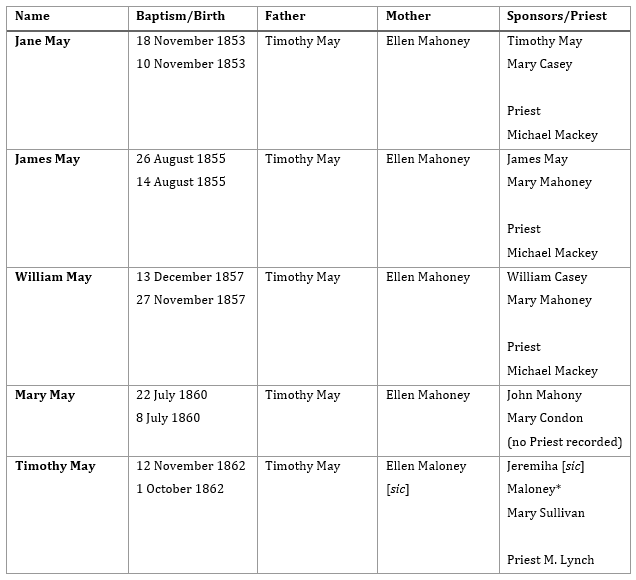 Clearly, Timothy’s mother was Ellen Mahoney and not Ellen Maloney. The only Jer* M*oney (the name of the sponsor of Timothy May) found in the 1861 census for Douro was Jeremiah Mahoney, not Maloney, who was a 28-year-old Roman Catholic farmer.

Father Michael Mackey, who baptized the first five May children, was the second pastor of Douro. He was reassigned from the city of Peterborough to Douro in August of 1852. Though only one May family was found represented in the early St. Joseph’s records, many Mahoney and Maloney families were represented. Father M[ichael] Lynch was new in town when it became time for the baptism of Timothy May, his first signature appears in the Baptismal Register below the record of a baptism performed on 6 December 1860. The mistake possibly occurred because Father Lynch was not yet familiar with the families in Douro.

Timothy May (2), of the next generation, thought he was 99 years old in 1909 (born about 1810) when he was only really about 83. A news article was printed in the Inter-Mountain Republican (Utah) on 30 June 1909. The article reported about an event in which four thousand “silver-haired citizens of Utah” were honored by City and State officials at an event held at the Salt Lake City, Utah Tabernacle, including Timothy May, then residing in Ogden, Utah. “Ogden won honors with the two oldest guests present. …. Timothy May, also of Ogden, with 99 years to his credit came next. Rules prohibiting smoking on the grounds were suspended for Mr. May, who calmly smoked his pipe and chatted with friends. “I’m as spry as I was 30 years ago and I’m having the time of my life watching these old folks enjoy themselves.” Said Mr. May.” As is often the case, a person’s recorded age varies from their exact age the older they get. When we removed an exact age as any kind of a factor and simply evaluated geographical location, age range, and family birth order, the bits fell right into place.

The 1851 census for Douro was unique in that it preserved the maiden names of the married women. Timothy May (2) was enumerated in the home of Timothy May and Ellen Brierty as 24 years old. His real birth date was closer to 1826-1827, not 1810. A 15 or even 20-year swing in a person’s reported age is not uncommon among the Irish.

Acorns Can Be Spread Far and Wide

To solve this particular Irish genealogy brick wall, we went to the forest and gathered up seemingly random acorns of information.

Not all Irish left Ireland because of the famine, although famine was a big motivating factor. We learned that Timothy May (3) received a land grant in 1834 in Douro because of his service in the Sligo Militia (County Sligo, Ireland). On 27 February 1839 Major-General Sir. George Arthur, K.C.H. wrote a dispatch to Lord Glenelg to ask for “your Lordship’s consideration the extreme destitution of the unfortunate individuals whose cases have formed…” Timothy May (3) was one of the poor souls on the list; it was reported that he had been discharged 31 August 1814 from the Sligo Militia in Ireland.

We had two little acorns that on the forest floor that had not yet been reconciled. We knew from records in Douro that Timothy May (3) had a son born in Ireland about 1810 or so named Thomas. We also had a baptismal record for a Thomas May on 3 January 1809 in Cashel Roman Catholic Parish, County Tipperary, Ireland, who was the son of “Tim May and Ellen Briarty.” Tipperary? How could that be? You can’t get much further away from County Sligo then County Tipperary and still be in Ireland. How could these two little acorns be from the same tree? Indeed, they were from the same tree and were the same Thomas May.

We retrieved Timothy May’s (3) discharge papers which told us that Private Timothy May served in the Sligo County Militia from January 1807 through 31 August 1814. At the time of his discharge, he was 5 feet 7 ¾ inches tall and 32 years old. He was a laborer and was born in “Ballisodare.” Timothy was discharged because his skull was fractured when he had been called on to rescue some of the soldiers of the regiment (not local militia) who were assaulted by a mob at Chelmsford (Essex County, England) in July of 1812.

Old books printed before the modern age of endless copy and paste are wonderful treasures. We studied the book History of Sligo, County and Town, Volume III which was printed in 1891.

Between 1813-1815 England was embroiled in a war with France in the sixth and seventh coalitions of the Napoleonic Wars. Because England was at war, the local Sligo Local Militia was called up to active military service to support the regular army. They were “all allowed to be accompanied by their wives and families without restriction as regards numbers; and provisions as well as accommodation were allotted to them on board the transports…; hence, babies could be born.

In July of 1812 when Timothy May (3) was injured in Chelmsford, Essex County, England, the Sligoes were quartered in Chelmsford. The Sligo Militia was subsequently disbanded on 7 October 1814 from Limerick, Ireland.

The overall research effort required the use of considerable time and patience; however, when we fully embraced the forest, she opened and showed us our way home.

When researching your Irish genealogy brick walls, remember to:
1. Embrace the forest and cluster together all the little leaves you can find.
2. Don’t go with the first record that you find, remember that original records can be wrong. Look at what the rest of the forest is trying to tell you.
3. Don’t lose your path simply because of age variances.
4. Don’t dismiss any acorns without knowing for sure if they belong or not.

If you’re hitting a brick wall while tracing your Irish ancestors, our team of professional genealogists can help! We have the knowledge and experience necessary to help you trace your Irish ancestry. Contact us today for a free estimate!

As a Certified Genealogist®, Jacqueline is committed to providing thorough and ethical research specializing in determining the identities of, and contact information for, unknown or undisclosed heirs at law. In her over 25 years of experience, Jacqueline has become an industry leader in probate succession, intestacy, kinship determination, and due diligence research regarding real estate, insurance, title, trust, and unclaimed property matters.

Previous article: This Is Not a Drill: Pennsylvania Military Records Can Be Found Online!
Next article: Using DNA to Solve Genealogy Brick Walls