The 1880 U.S. census can provide important clues to aid in your family history research. We share 7 tips to utilize this resource effectively in your genealogy research.

Census reports, when available, are one of the backbones of genealogical research. They help us trace family members back and forth in time and provide a great deal of biographical information about each person, all in a neatly arranged table format. It is easy to focus on those all-important columns which provide the key facts: name, age, occupation, marital status, place of birth. Do you want to learn more about the history behind the U.S. Census? Read our article, Lesson in History: How Did We Get the 1790 U.S. Census?

Why is the 1880 U.S. Census Important for Genealogists?

The 1880 U.S. Census is well-known for being the first census to (finally!) report the relationship of each individual to the head of the household. It was also the first to specify the place of birth not only of the individual being enumerated, but also the place of birth of his or her parents. Genealogists love the 1880 U.S. census for providing those much-needed clues.

But hidden in plain sight, in all of those other columns that often only contain a tick-mark, is additional information which can provide a great deal of information about the lives of our ancestors. Not all of them are always used, but when they are, they offer a bonanza of detail and a deeper glimpse into the lives of these individuals. Here are seven places you should always check in the 1880 U.S. Census and why!

Tips for Using the 1880 U.S. Census for Genealogy Research

We tend to give scant notice to the first two columns of the census. We know that they track the number of the dwelling and the number of the family, noting how many families live in a building, such as an apartment or tenement house. But beginning in 1880, there were two additional columns added to the census before Column 1. Designed for city use, these note the street name in the first column, and the house number in the second column. With this information we can pinpoint the exact address at which our ancestors lived. In the example below we can see that the Samuel Gracey family lived at 85 Lexington Street in Boston and their neighbors, at 89 Lexington Street, were the Howland Otis family. 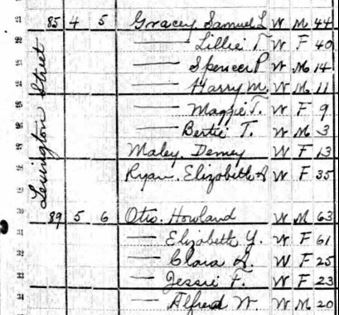 This column isn’t often used, but if your ancestor was born during the census year (June 1879 through May 1880) the month of his or her birth should be noted in this column. This makes finding a birth or baptismal record a lot easier.

If your ancestors were married during the census year the month in which their wedding took place should be noted in this column. As with the birth designation, this can help narrow your searches for marriage records considerably.

This column isn’t completed for everyone (mostly adult males) and when it is, there are just small numbers written there. Those numbers indicate the number of months in which that individual was unemployed during the previous year. This provides a picture of the financial situation of the family, and sometimes helps to explain why the children were working.

Every time I see something written in this column, I get excited. You just never know what you will see there. This column asks if the individual was sick or temporarily disabled on the day that the enumerator arrived. If so, the enumerator was to specify the illness or reason for the disability.

In the example below, it appears that Margaret and Ann were suffering from bilious fever when the enumerator showed up at their house. 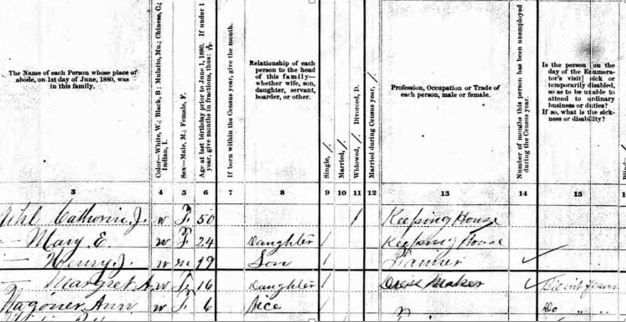 This section of the census, labelled “Health,” has five columns which might contain a single tick-mark. They aren’t often marked, and when they are it is easy to overlook them, but they provide information about the physical health of that ancestor. If Column 16 is marked, that person was blind. Column 17 indicates a deaf and dumb individual. Those who were considered “idiotic” were noted in Column 18, while the insane were marked in Column 19. (The instructions to the enumerators did not define the two terms, leaving it up to the enumerator to make his own determination regarding the mental state of each individual.) Finally, Column 20 was to be used to designate a person who was “maimed, crippled, bedridden, or otherwise disabled.”

The education of the various family members was the concern of these columns. The first noted the number of months that person attended school during the previous year. Column 22 was to be marked if that individual was unable to read and the following column was to be marked for those who could not write.

Genealogy is so much more than simply listing the names, dates, and places of our ancestors. Sure, those bare bones are important, but the stories and specifics are what bring them to life. Learning the details of their lives helps to make these distant family members seem less distant and more real. By carefully noting all of the information contained in the 1880 U.S. Census, we have the potential to get to know them – and their world – a little better.

Have you discovered an interesting tidbit about your own family in the 1880 U.S. Census? Share your story in the comments below! Need help tracing your family back to 1880 in the first place? Contact Legacy Tree Genealogists – we can help! 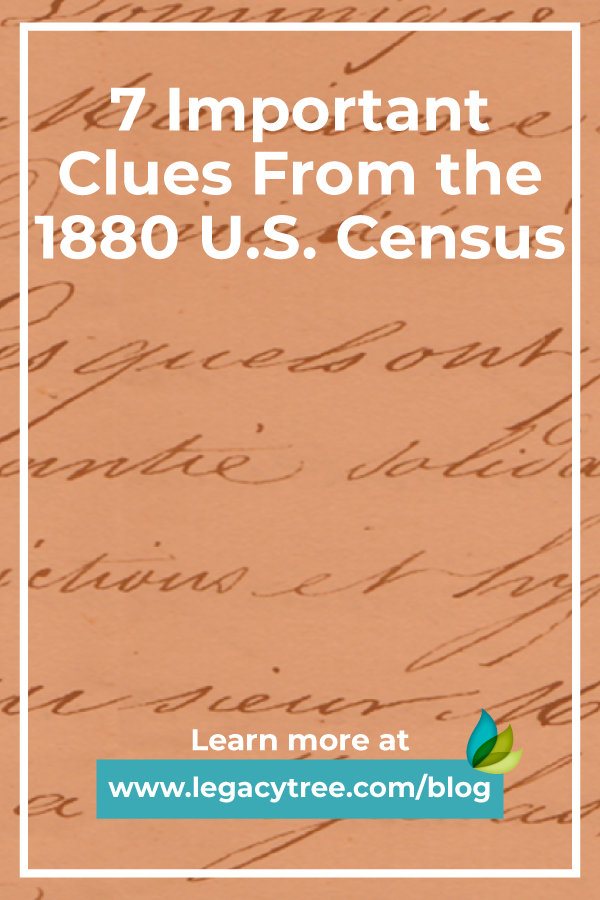