Researching French-Canadian ancestry can be incredibly rewarding, thanks to excellent records, preservation, and digitization. Our post, Top 3 Online Resources for Researching Your French-Canadian Ancestry, describes useful online resources that may help you trace your ancestors as far back as the 17th century. 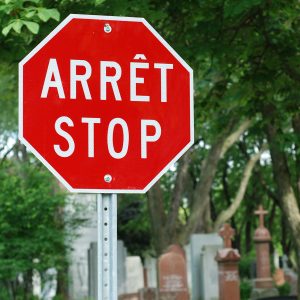 As promising as French-Canadian research can be, there are unique challenges with this particular population that may hinder progress. Everything from naming conventions to immigration patterns can make researching one’s roots difficult. Legacy Tree Genealogists’ Marie Palmer describes three types of roadblocks that are common in French-Canadian research and tips to overcome them.

Up until recent decades, French Canadians usually baptized their children with at least two or three names. Often, a boy’s first name would be Joseph and a girl’s would be Marie. Their second name may be that of a godparent’s, and the third name may be the one normally used to address the child. For instance, my grandfather was baptized as Joseph Alexis Jean-Paul L’Epicier. His godfather was Alexis and my grandfather only used the name Jean-Paul.

The combination of these naming patterns and the relative isolation of large families in smaller villages meant that it wasn’t uncommon for cousins to share the same names. To help differentiate themselves, our Quebecois ancestors often used the “dit” naming convention which took the form of a secondary family name or nickname that was added to, or even replaced, the primary surname.

An individual may have been named differently on various records, sometimes with or without their “dit” surname. For example, the following names may all refer to the same person:

This example is complicated further since the name Martin may be confused for a first name. Unfortunately, there may be no discernable pattern as to when or why an individual used a variation of their name in certain records.

With this in mind, it’s important to expand your research to include various name combinations and to verify results by comparing vital information against other records.

Two exceptional online resources can help with this challenge: PRDH-IGD.com and GenealogyQuebec.com’s LAFRANCE. Both websites provide search tools that list commonly associated “dit” names (referred to as “nicknames”) when you enter a surname.

Following our Michel Martin dit Pelland example, when we search these sites for the surname Martin, nickname suggestions automatically appear on the right side of the screen. In the image below, there are 892 instances of Pelland in the PRDH-IGD database. You have the option to search for Martin “or” Pelland, or Martin “and” Pelland. 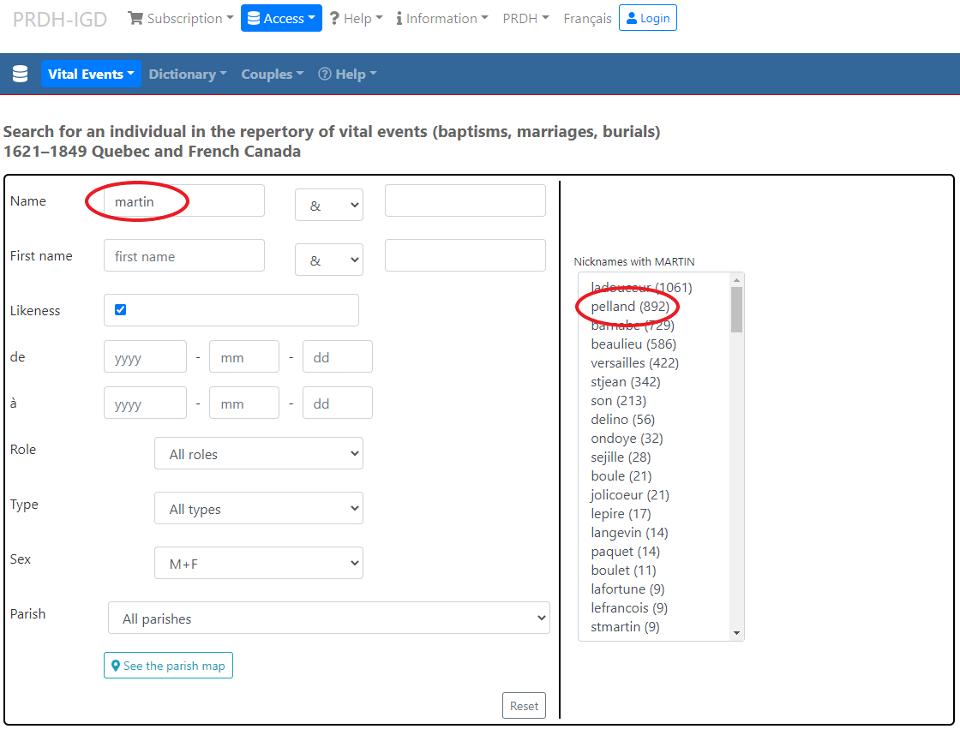 For further information about these websites, see French-Canadian “dit names” and nicknames. And to learn more about “dit” names, visit Dit (dite) Names.

One of the most valuable sources genealogists refer to are census records which, among other things, may provide information about our ancestors’ ages, residences, family members, and occupations. The earliest census records for Quebec (New France) appeared in 1666.

By 1851, the Canadian census was collected every ten years and typically gathered a goldmine of information. You can learn more about the various Canadian census records here.

But what if your ancestors don’t appear in an expected census record? If you’ve tried name and age variations and still can’t find them, it’s possible they moved to the United States either temporarily or permanently. During the latter half of the 19th century and early 20th century, Quebec’s faltering agricultural economy compelled tens of thousands of French Canadians to leave in search of more prosperous employment opportunities south of the border.* Several of my French-Canadian ancestors traveled back and forth between Canada and the United States, sometimes appearing in Canadian census records, and sometimes in American census records.

Be sure to look through US census records as well as city directories and border crossing records. French Canadians are often found in New England records, such as Maine, Rhode Island, and Massachusetts. And search for birth, marriage, and death records in those areas, too.

DNA testing offers exciting new tools to use alongside documentary research to help break through brick walls. If, for example, traditional research has been unable to identify the parents of a particular set of second great-grandparents, we might turn to our DNA results for additional clues. Part of the analysis would attempt to isolate a group of DNA relative matches that appear to descend from a shared ancestral couple. By examining the family trees of those matches and reaching out to them directly, we may find they have further information about the shared ancestors’ parents.

For more information about how DNA testing works and which tests to take, see our previous blog post, The Who, What, Where, and Why of Genetic Genealogy Testing.

Analyzing French-Canadian DNA can be tricky due to a phenomenon called “endogamy,” which is the result of intermarriage within a specific population over many generations. This happened in instances of religious or geographical boundaries. French-Canadian, Acadian, and Jewish populations are examples of endogamous groups.

Endogamy means that descendants of a population group, such as French Canadians, may be related to other descendants in more than one way. For example, you and someone named Joseph might be 2nd cousins along one ancestral line and 4th cousins along a different line. This inflates the amount of DNA you share, skewing expected results and theories.

For descendants of French Canadians, the first step in tackling endogamy in your DNA results is being aware that it is a possibility to begin with.

Fortunately, there are strategies to follow when working with cases of endogamy and we discuss some of these in our articles, Dealing with Endogamy: Part 1 and Part 2.

Although endogamy adds another layer of complexity to DNA analysis, it’s a challenge our specialists have successfully worked through many times. Get in touch with us to see how our experts can help you with your French-Canadian research.

Marie loves helping others learn about their family history. Her background as a professional genealogist, software engineer, library consultant, and educator gives her valuable problem-solving and research skills and a passion for sharing her knowledge. She enjoys research involving DNA, unknown parentage, United Kingdom, and French-Canadian genealogy.

Previous article: Ask a Genealogist: Interesting Facts About French-Canadian Research
Next article: Polish Genealogy Research in the Kingdom of Prussia