In a recent blog post, Dealing with Endogamy: Part I, we explored the unique challenges of interpreting autosomal DNA test results for individuals from endogamous populations. Endogamy is the custom of marrying only within the limits of a local community, clan, or tribe over the course of many generations. Pedigree collapse, a related concept, occurs when two related individuals produce offspring. As a result, the number of unique individuals occupying locations in a pedigree decreases.

Endogamy means that individuals from the same population will frequently share multiple ancestors in common with each other. They also may descend from the same ancestral couple multiple times, which can greatly complicate autosomal DNA analysis.

In the last article on this topic, we discussed the key strategy of reviewing exactly how much DNA genetic cousins share with each other when evaluating their relationships. Here we will discuss another strategy for dealing with endogamy: testing multiple relatives.

Since different descendants of an ancestral couple inherit different segments of DNA, it is always a good idea to invite additional relatives to test when exploring a brick wall problem. Other relatives will have different segments and will therefore have different matches as well. When dealing with endogamous populations, it is particularly important to test as many known relatives as possible. If you are dealing with a case of unknown parentage or adoption, collaborate with your genetic cousins and work with them to test more of their known relatives, focusing first on the older generations of their living family. Even if you know that specific relatives may be related through multiple family lines, test them anyway; their test results will greatly assist in filtering and organizing your matches.

In endogamous populations, it is quite likely that close relatives will be related through multiple family lines. Therefore, it is essential to have trees that are as complete and far back as possible for each relative tested. Since shared segments of DNA may and often do come from more distant relatives in endogamous populations, consider extending family trees 7 generations or more. This will not only permit researchers to identify the multiple ancestors you share in common with the relative, but will also aid in the exploration of the multiple relationships that the relative has with your other relatives and genetic cousins.

In some cases, it may not be possible to build extensive family trees for relatives. Record loss or limited availability may prevent the construction of detailed multi-generation family trees. In these cases, consider documenting and focusing on the ancestral origins rather than ancestral couples. In Ashkenazi Jewish research, do your best to identify the ancestral villages in Eastern Europe for genetic matches. This may help to tie brick wall ancestors to specific localities and regions. 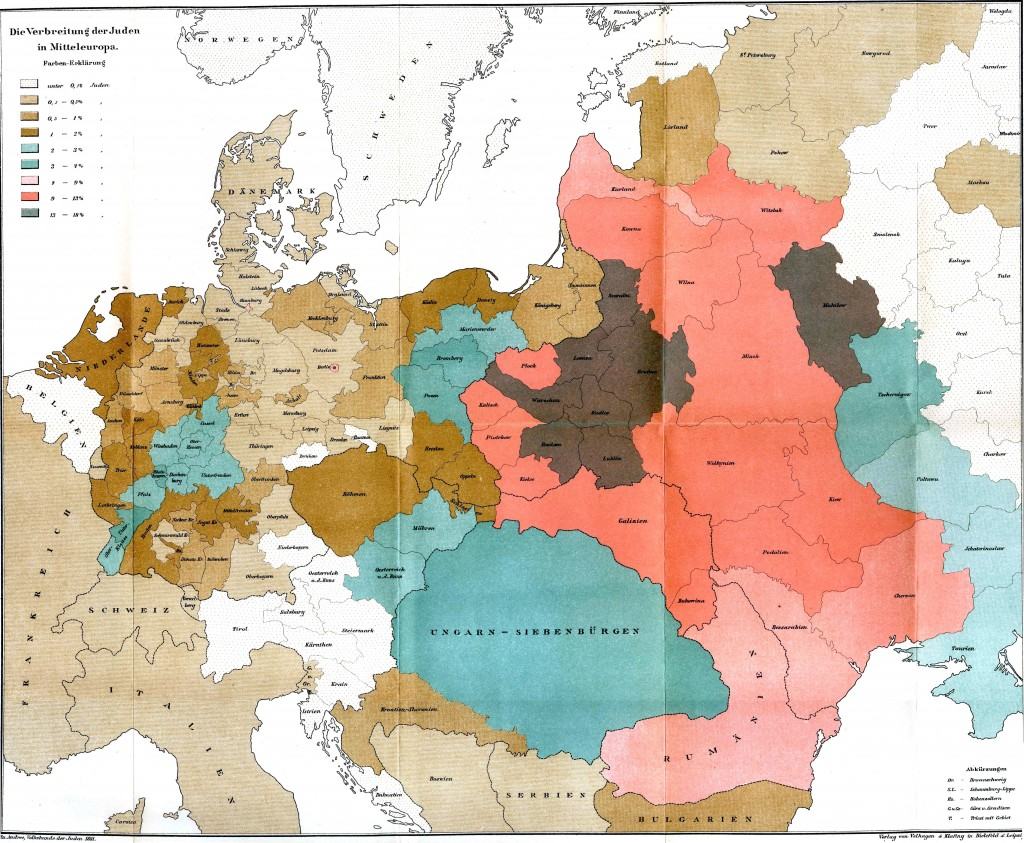 An 1881 German map depicting Jewish populations in Europe at that time. The highest densities are represented by the red and darker colors in areas now covering modern-day Poland, Belarus, and Ukraine. Ashkenazi Jews from this part of the world were strongly endogamous, making tracing their genetic ancestry more complicated.

Though each of the DNA testing companies offers information regarding relatives that a subject holds “in common with” genetic cousins (also known as ICW), in order to be useful in the investigations of endogamy, researchers must also have access to the actual test results of other tested relatives. It is not enough to know that a genetic cousin matches a known relative. In an endogamous population we can expect that most members of the population match many other members of the population. We also need to know how much DNA they share with that relative.

Access to the test results of relatives also permits the investigation of unique shared segments of DNA which could be representative of how much DNA a match might have shared with the common ancestor of multiple known relatives. Performing this type of research with multiple close relatives can also aid in chromosome mapping which in turn can identify the segments of DNA that were inherited from a specific brick wall ancestor. Assigning segments of DNA to particular ancestral lines and sifting through the relationships between multiple family members enables researchers to identify and focus on the most pertinent matches to a particular research question.

Autosomal DNA analysis in endogamous populations can get messy quickly, so testing additional relatives with direct line tests and encouraging genetic cousins to do the same can help to narrow the possible relationships and can give increased structure to the investigation. Wherever possible, attempt to perform DNA testing of specific relatives in order to determine the Y-DNA signatures of each great-grandfather and the mtDNA signatures of each grandparent. Encourage genetic cousins to do the same for their own family. Direct-line tests can serve as anchors and guides for interpretation of autosomal DNA test results and can identify family groups within a single pedigree that are likely related to each other.

DNA analysis can be tricky, and endogamous ancestry makes it that much more difficult. If you’re struggling to piece together your genetic family tree or identify a parent, grandparent, or other relative, Legacy Tree Genealogists can help. Contact us today for a free consultation.