Legacy Tree Genealogists’ Adrienne Abiodun provides resources and tips on how to overcome the challenges within African American genealogy research and especially to help with identifying African American women. 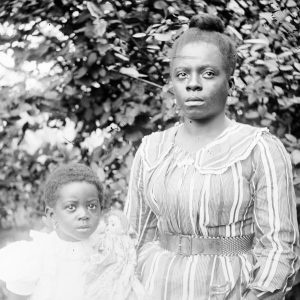 There are certain challenges that come with researching specific groups of people across the world, for example – women. In a previous blog post, Legacy Tree Genealogists’ researcher, Jessica Howe provided numerous tips to assist in the identification of women in historical records. If your ancestor was an African American woman, many of those tips such as consideration of nicknames, regional accents, and phonetic spelling are applicable for researching ancestors who were Black American women of African ancestry. The difficulties in researching distant African American ancestors who were women can be lessened with a general understanding of American cultural norms in addition to some history of African Americans in the United States.

Up until modern times, African American women married in what’s considered American tradition, typically taking the surname of her husband as her own. The inheritance of a husband’s surname has been common practice in African American unions for hundreds of years. Naturally, any time a woman assumes the surname of her spouse it can be particularly difficult to uncover what her maiden name previously was. Like any other person, marriage certificates or licenses for African American couples can be easily located at court houses, state vital record departments, and archives. If the groom’s name is known, then the bride’s maiden name should be provided on the record as well. In other words, the methodology and research for African American women are just about the same as anyone else. That is until the timeframe of institutionalized slavery within the United States of America.

Prior to 18 December 1865, when the 13th Amendment was adopted into the United States Constitution which finally abolished slavery, a majority of African American people across the southern United States, as well as parts of the North, could be enslaved for the whole of their lifetimes. Although enslavers were often individuals of European ancestry, other free Black Americans could also enslave women, men, and children. Indigenous Americans participated in the institution of human slavery too. Enslaved people existing as members within a society which restricted every civil and social freedom were not permitted to formally marry, own land, or move freely around the country.

As it relates to African American women marrying during this time frame, marriage records that could provide their maiden names are sometimes harder to locate if one exists at all. Families who kept Bibles may have recorded births, marriages, and deaths in the Bible, yet locating family Bibles from the mid-1800s is not easily accomplished by any family researcher nowadays. Two of the largest family Bible indexes include the Daughters of the American Revolution online index to their collection of more than 84,000 Bible records, and the Yancey Family Genealogy Bible index which includes 60,000 surnames. Other family Bibles may be located in local libraries and archives in your area of research, or with a member of the extended family.

Two great resources for locating the maiden name of an African American woman during the early to mid-1800s are military pension records if her husband, relative, or other remember of her community served in the military during the Civil War. Another resource to research is marriage records generated through the Freedmen’s Bureau.  Maiden names may also have been provided on Freedmen’s Bureau bank records. However, locating African American women in these documents requires a good understanding of who the men in her life were, husband, father, brothers, and so forth.

Finding Names During and After Enslavement

Not all African American women were enslaved members of society prior to the 13th Amendment. Those who weren’t may be found on census records in the 1860s and 1850s and even earlier. This was not the case for those who had not been legally emancipated prior to the end of institutionalized slavery. The challenges of finding ancestors who were black women or men during this time are increasingly difficult. Surnames used by African American women and men were usually the surnames of their enslavers past or present. Thus, their surnames have no long-running connection to their biological ancestry. During this period, if an enslaver died prior to the end of the Civil War, the names of his enslaved “chattel property” may have been recorded in the probate record of his estate or within his last will and testament. Newspapers are also a good resource for locating African American women and men during this time frame if their enslaver died prior to 1865. However, the surnames of African American women or men may or may not have been included in those records either.

Because the origins of the names of many African American people were the family names of their enslavers, some families changed their names post-enslavement to mark the beginning of their new lives as free people rather than the life they once held as someone else’s property. While this was certainly beautiful and freeing for the individuals involved, it creates another consideration for locating one’s ancestors just after the Civil War. Without oral or written history describing a name change occurrence, how can one be sure the name of their ancestor is that of their ancestor’s former enslaver or a name their ancestor may have chosen post-emancipation?

Overcoming research barriers created from this dark period in American history is not impossible, nor is it an easy feat. For this reason, today’s genealogists of African American families should consider the incorporation of DNA testing to move beyond research hurdles in African American genealogies across the United States. DNA results provide access to genetic cousins or match lists whose family trees may go beyond your own family tree. These match lists are great for developing research leads. Further, genetic inheritance of mtDNA and X DNA can also provide a way forward in identifying our direct maternal ancestors as well as collateral women relatives in our family trees.

Today’s consumer DNA testing products permit women and men to test and essentially learn something about both sides of their families. Targeted research strategies and inviting other relatives to test will help take the family lineage even further. When an individual tests and matches with others or a cluster from one family set, those individual matches or that entire family set becomes our compass to guide us to the African American men and women who have yet to be discovered within the family trees of people of African descent. This is one of the most powerful resources today’s genealogists can use to overcome the challenges within African American genealogies and especially to help with identifying African American women.

If you have African American ancestry and need help locating information on your ancestors, we can help. We have researchers that specialize in evaluating clues to overcome brick walls to extend your family history. Contact us today for a free quote!

Previous article: My Journey to Dual Italian Citizenship
Next article: Connect to Your Roots: Plan Your 2023 Heritage Tour Now