As genealogists, we’re often asked to research the likelihood and details of a client’s Native American heritage. Legacy Tree Genealogists’ researcher Michelle Carroll digs deeper into her journey and successful strategies when tracing her Cherokee ancestors.

If you believe that you may have Cherokee ancestors and have always wanted to know more, let me encourage you to leap into discovering your Native American heritage. Learning about my own Cherokee family has been one of the most rewarding parts of my genealogical journey. Although there are unique challenges associated with Cherokee research, finding a family connection is an achievable goal when armed with a good research plan and an understanding of available records. To begin, I suggest reading our previous post on the basics of researching Cherokee Ancestry. Then read on to learn more about how to approach your research project, the limitations of DNA in Native American research, tribal citizenship, and the use of Cherokee rolls.

My grandparents were born in Oklahoma, and my family told me that my grandfather was part Cherokee. Tribal rolls, which listed the names, ages, and other information of individual members of the tribe, confirmed the family stories and provided the evidence I needed to apply for Cherokee Nation citizenship. The key to tracing your connection to the tribes is understanding where your family lived in proximity to the Cherokee throughout history.

Before the disputed 1835 Treaty of New Echota, which resulted in the Cherokees’ forced removal from their homeland (known as the Trail of Tears), they were primarily spread across portions of Alabama, Georgia, North Carolina, and Tennessee. The exception was those who left their native homeland under the treaty of 1817 to claim property around modern-day Arkansas and were eventually removed to Indian Territory [present-day Oklahoma], referred to as “Old Settlers.” By 1850 multiple migrations led many tribal members to settle in the Indian Territory. However, a small group avoided the forced relocation. It remained in the Eastern U.S. Knowing when and where your family lived within these states will help determine which records to consult during your research.

As a genetic genealogist for Legacy Tree, I rely on DNA to solve genealogical puzzles and break down brick walls; however, it is essential to understand DNA’s limitations in Native American research. While a DNA test may provide evidence of Indigenous American ethnicity, connect you with relatives, and encourage further research, it does not establish a connection to a specific tribe. It is not accepted as proof when applying for Cherokee citizenship. There are 574 federally recognized American Indian and Alaskan Native tribes and villages in the United States. If your DNA results reveal Native American ethnicity, finding your connection should begin by tracing each generation of your family back in time until you find a tribe that lived near your ancestors. 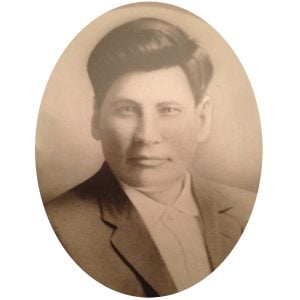 My tribal citizenship came through descendency from my second great-grandfather, Arch Sequichie (Cherokee name Ah-Tsi), recorded on the 1900 Dawes index card with 3/4 degree blood quantum. His eldest three children were also named, including my then one-year-old great-grandmother, Nina. One of the most important pieces of genealogical information on Arch’s index card would be easy to overlook if you didn’t know its importance. Under the column titled “Tribal Enrollment” is his reference number in the 1880 Indian Census and the name of the district his family lived in at the time. This reference number made locating his birth family in the 1880 census very easy and resulted in another generation of Sequichie names added to my family tree. The Dawes index card also contains handwritten notes referencing other family records, which illustrates two of the most crucial research strategies for tracing your Cherokee ancestors, which are to:

Tracing Your Cherokee Ancestors Beyond the Trail of Tears

One of the primary reasons working your way backward chronologically through records is important for successful Cherokee research is to trace the name changes that were prevalent during the removal and relocation. As I worked my way back through rolls for my own family, I found notes in Arch Sequichie’s Eastern Cherokee Claims Application explaining name changes for his mother, Ah-yau-sti, as she traveled the Trail of Tears. When she arrived in Indian Territory, Ah-yau-sti received the English name, Martha Powell. These notes also reference the family’s group number in the 1851 Drennen Roll. Using this step-by-step research strategy helped me to successfully identify my family in the Henderson Roll taken before the Trail of Tears and find the location of their original land near the North Carolina-Georgia border.

Although researching your Cherokee roots can be time-consuming, the connections you make with relatives and stories you learn about your family make it is a goal worth pursuing. If digging into these records on your own seems daunting, our expert researchers would be honored to help you through the process. Contact us today to let us know how we can help you learn more about your heritage.

Michelle loves using a combination of genetic genealogy and traditional research to help clients break through genealogy brick walls. In addition to a bachelor's degree in teaching, she holds a certificate in genealogical research from Boston University. Michelle's own diverse background has resulted in a breadth of genealogical knowledge to offer clients including French Canadian/Acadian, Cherokee, African American, and Norwegian ancestry research.

Previous article: Daughters of Union Veterans of the Civil War, 1861–1865
Next article: How to Get More from Today’s Genealogy Events & Meetings