Although all of these names refer to the same individual, the descendants of Jean Joseph’s five sons might call their ancestor by different names based on their different family histories and native languages. Now imagine if Jean Joseph’s descendants had immigrated instead to Algeria, Israel, Russia, Greece and Armenia. Not only would his name be pronounced differently, but it would be written in different alphabets as well.

For many genealogists, research will eventually progress to a point where your ancestors lived in a place where people spoke a different language, or where government administration and records were kept in a language other than what the researcher speaks. Beyond the usual barriers of researching in a foreign country, it can also be quite difficult to find individuals if they used naming equivalents in several separate and unfamiliar languages.

At Legacy Tree Genealogists, we have observed this phenomenon in many different situations. For example, Pennsylvania Germans, New Amsterdam Dutch, and many Italians often anglicized their names later in life. French Canadians sometimes translated their surnames into English – LeBlanc became White and DuBois became Wood. Ashkenazi Jews often maintained separate legal and religious identities. Russian immigrants had to deal with different spellings in a new alphabet. German ancestors may have used a German name in daily life, but their legal and religious name may have been a Latin equivalent. When searching for these ancestors, it can be difficult to determine which names an individual may have used throughout their life and which ones will get you the best results in your research.

With this challenge in mind, MyHeritage, one of Legacy Tree’s official partners, has developed a revolutionary technology to assist individuals of different culturals and linguistic traditions to connect with their ancestors and living cousins. MyHeritage’s Name Translation technology will take a search query and include name equivalents and alphabets in the search results. Before the advent of this technology, in order to connect with individuals who had published their trees in Russian, it was necessary to search in the Cyrillic alphabet. Now researchers can enter their search in any language and obtain results from all over the world. The example provided in this article shows a search for Sasha Ivanovich and demonstrates results with equivalent names like Alexei and Alexandre as well as results entered in the Cyrillic alphabet. 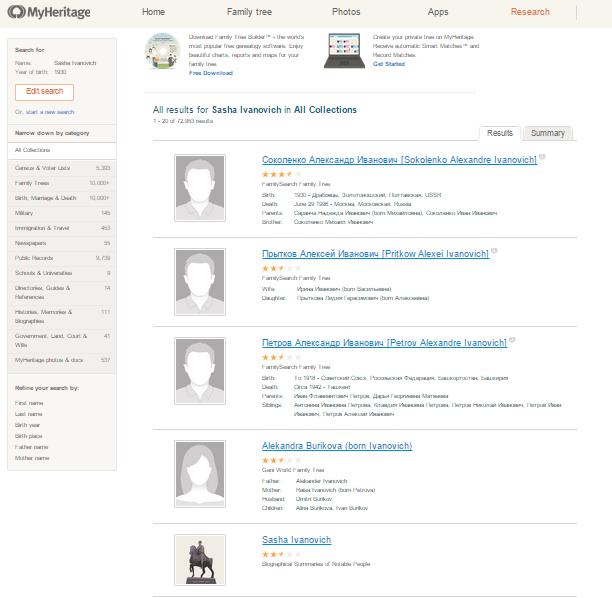 This resource is invaluable for researchers whose distant cousins immigrated to all parts of the globe. By using the name translation search, they can connect with their distant cousins who may have also documented information on their common ancestor, but who until now were inaccessible due to language barriers. As an example, descendants of European Jews who immigrated to the United States, Israel, and other parts of Europe and the world are particularly well-suited to benefit from this new technology given the linguistic and alphabet differences between the various destination countries of their relatives.

We note that while this technology is extremely useful in very many cases, there may be some situations where a narrower search would be preferred. Since the Name Translation technology is a search-broadening tool, it is likely that the results may include some records and hits that are not pertinent to specific research questions, and so there is an option to disable the name translation options when needed. However, it appears that most pertinent results appear near the beginning of the results of search queries. Ultimately, translation results should not drown out the information you are seeking on your particular ancestor.

As the recommended research firm of MyHeritage, Legacy Tree is excited for the benefits to be gained from this breakthrough technology both for MyHeritage members as well as Legacy Tree clients whose ancestors may be hiding behind language barriers. Would you like us to help you with your research? Contact us today for a free consultation.