Legacy Tree Genealogists works with researchers from across the globe to access records for our clients. We asked one of our onsite researchers located in Istria, Croatia, to share some of the nuances of genealogical research in Istria.

Istria is a peninsula in the Adriatic Sea belonging to Croatia, Slovenia and Italy. Its name derives from the name of the tribe Histri. When the Roman army invaded their capital in 177 BC, the Histrian king Epulon, his guard and their families committed mass suicide, choosing death over slavery. A few stones left from that period can still be seen in the open-air museum of Nesactium (known as Vizače in Croatian).

Rome was not the only foreign power to rule Istria from afar. Over the centuries, Istria was ruled from Venice, Ljubljana, Vienna, Belgrade and Zagreb. Due to this history, records for Istria are held in various archives. The main genealogical archives for Istria are in Pula, Pazin, Rijeka and Zagreb, all cities in Croatia. However, some records are also held in the archives of Koper in Slovenia and Triest in Italy.

The Three Official Languages of Istria

For genealogical research in Istria, it is very useful to know the names of towns in all three languages, because records will be in different languages depending on the time period and area. There are three official languages on Istria: Croatian, Italian and Slovene, in addition to a few ancient languages and distinct dialects. The table below shows a few examples of town names in Croatian, Italian, and Slovene:

State borders in Istria shifted several times in the last two centuries. Every time new borders were drawn, there were consequences in the record-keeping as some dioceses and even parishes were split and redefined. Therefore it is vital for a researcher to know the history of the area. The main question before beginning research is to know when the parish was created and which towns were included in each parish.

The majority of the registers for Croatian Istria are still held by local parishes or in the archives of Pazin, Poreč, Rijeka or Triest. The original books are generally still held in the churches by the local parish priests. However, sometimes smaller parishes were incorporated into a larger, neighboring parish, and then the books will be held by that parish. The first step in determining where the parish registers are for a certain town is the National Archive of Pazin, Državni arhiv u Pazinu (DAP). This archive holds a list of parish registers and family books for all of Istria, both in book form and available online. Their website is in Croatian and English, though not all English pages work properly so it is a good idea to also search in Croatian with Google translate.

The dioceses of Triest, Poreč-Pula and Rijeka hold duplicate books of births, deaths, and marriages from every year from each parish from 1835 until World War II. Unfortunately, there are no indexes or family books (status animarum) that can be used to narrow down the research. This means research is a bit more challenging for bigger towns where there were several hundred births registered every year. Another difficulty in researching in cities is that the baptism could be a couple of months after the birth, so knowing the exact date of birth is crucial for successful research.

The Diocesan Archive of Triest, “Archivio storico diocesano di Trieste”, holds parish register copies for all of Istria except for the southern and north-easternmost parts for the period from 1835 until the end of the World War II. The Archdiocesan Archive of Rijeka, Arhiv Nadbiskupije Rijeka, keeps the duplicates for some northeastern parts of the peninsula that are not known as Istria but are called Čičarija and Kvarner. The territory of today’s Diocese of Poreč and Pula comprise all of Croatian Istria. Its Diocesan Archive of Poreč-Pula, Porečko-Puljski biskupijski arhiv, holds the majority of duplicates from 1827 to the present. This archive is not open to public but allows access to professional historians who must write an application letter for admittance.

There are few languages used in the duplicate records: Latin, Italian, Croatian, Slovene and German. There are also two different scripts used: Latin and the German Gothic alphabet. Personal names were also translated into the language of the record in the 19th century. For example, a boy named Josip was born in Pazin, but when he got married in Pula he was recorded in Italian as Giuseppe, and when he died in Dekani, Slovenia his name was written as Jožef. For some names this is complicated further with dialect variations: the English ‘John’ is equivalent to the names: Ivan (Slavic), Ioannes (Latin), Giovanni (Italian), Janez (Slovenian), or Zouanne (a dialect). Because names were translated into the language the priest was using at the time, researchers should not make assumptions about the ethnicity of the person based on a given name alone.

Priests copied out duplicates from their parish registers very year in December or January for the past year. Since they were copies, the handwriting is generally legible, nicer and often calligraphic from the mid-nineteenth century. Using duplicates is sometimes the only possible way to research a family if the originals no longer exist, but it is important to be aware of possible mistakes that occurred while copying data. 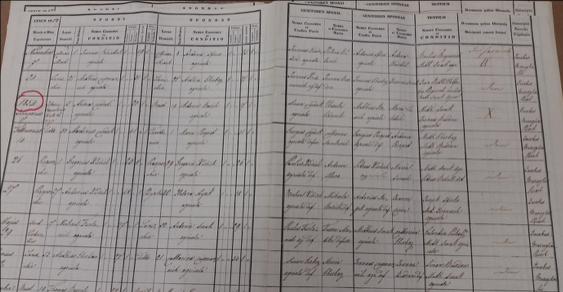 An example of a mistake in the duplicate registers.

Digital copies of parish registers before 1900 from the Croatian State Archives are available from FamilySearch. The copies are from 40-year-old microfilms, so they are in black and white. Fortunately, these copies were made before the Croatian War of Independence (1991–1995). Due to record destruction during the war, these black-and-white digital copies are the only remaining copies for certain places and time periods. 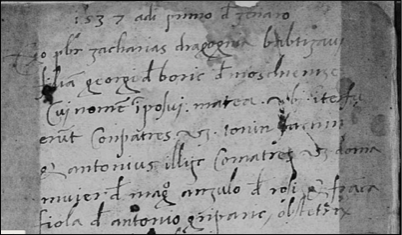 Digital copies of microfilms and the microfilms themselves are still stored at the Croatian National Archive in Zagreb, Hrvatski državni arhiv (HDA), for the all of Croatia. This archive also keeps many family books in addition to the digitized parish registers, and the latest copies are in color. The archive is housed in a palatial building built in 1913 in the Art Nouveau style and has a huge reading room with a beautiful ambience. If you need access to these records, one of our onsite researchers would be happy to assist! 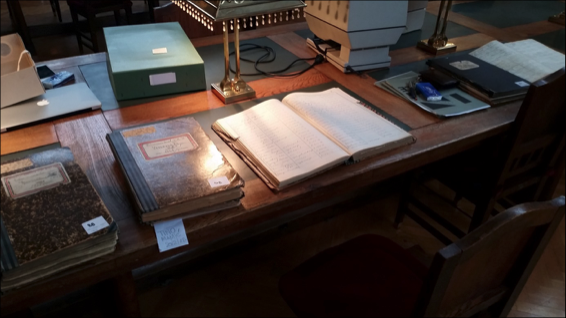 The reading room of the Croatian State Archives.

If you need help researching your Croatian ancestry, the team at Legacy Tree Genealogists is experienced at navigating the challenges presented by changing borders and record destruction to extend family lines as far back as records will allow. Our network of onsite researchers have access to the archives you need to make serious progress on your family history. Contact us today to discuss your research goals and request a free quote! 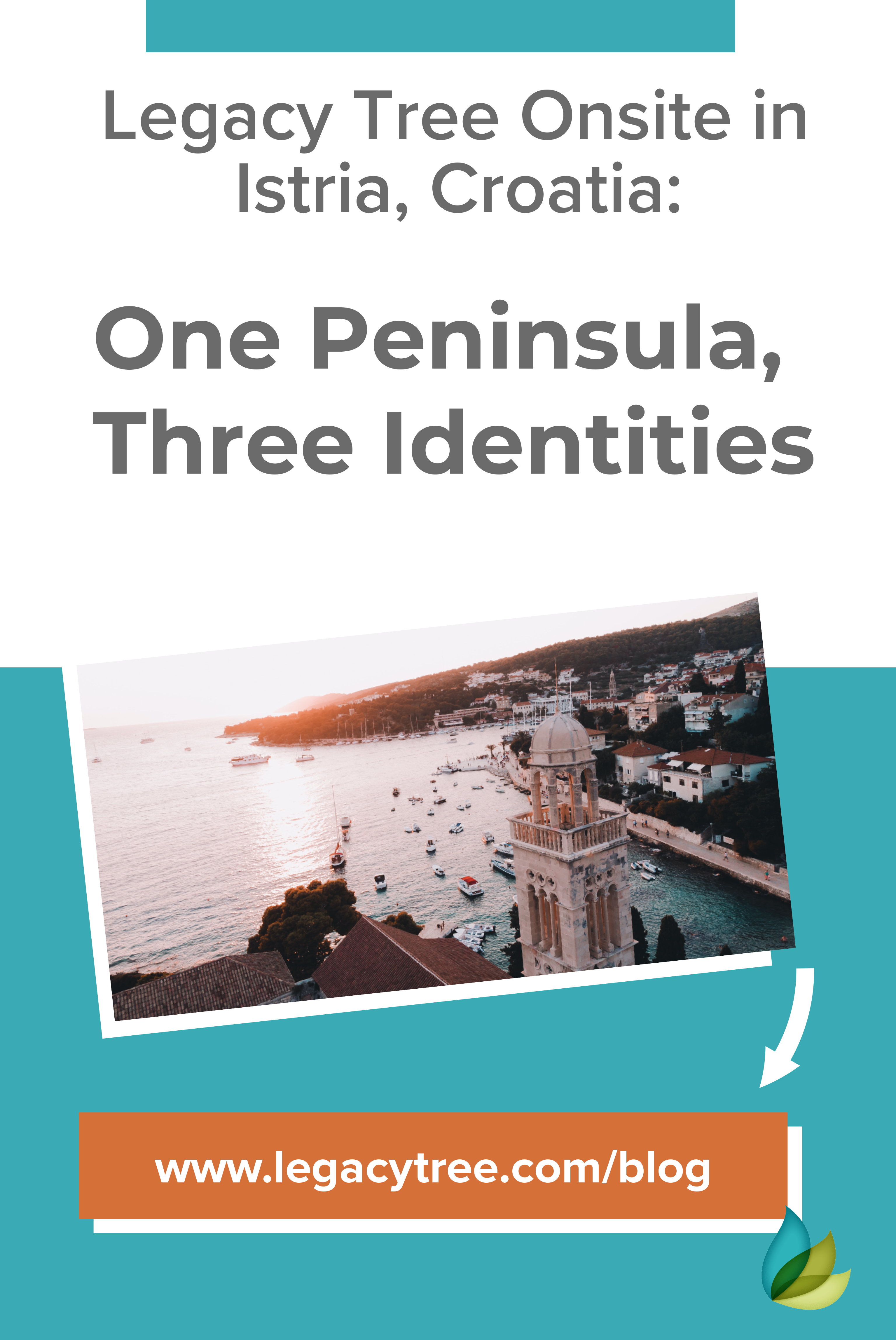