Paul Woodbury is a DNA team lead and professional researcher at Legacy Tree Genealogists where he has helped to solve hundreds of genetic genealogy cases. In this article, a reprint from an issue of NGS Magazine, Paul discusses how genetic ethnicity estimates can provide valuable clues for the composition of a test taker’s family tree. This article is published with permission. 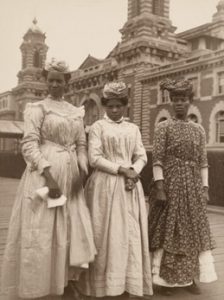 Ethnicity is a grouping of people based on shared attributes like traditions, ancestry, language, culture, history, or religion.

In fact, autosomal DNA test results from the major companies include at least two elements: ethnicity admixture estimates and genetic cousin match lists. While the match lists are typically the most useful elements for genealogical research, ethnicity admixture estimates can provide significant context and clues regarding a test taker’s family tree.

An ethnicity is a grouping of people who identify with each other based on shared attributes that distinguish them from other groups, such as traditions, ancestry, language, culture, history, or religion. Individuals of the same ethnicity often belong to the same population (all humans living in a geographic area), and in turn, may share a similar gene pool.

This is an important distinction due to the long history of human migration. While an individual’s more recent ancestors may have lived in the same location for hundreds of years, earlier generations may have come from different and perhaps geographically distant populations—which might result in surprising ethnicity estimates based on genetic information. 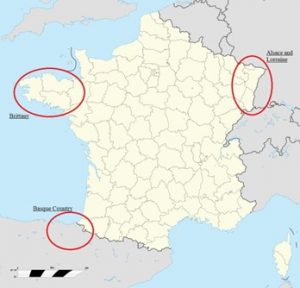 Ancestors of a test subject were members of the wider populations in which they lived. Some populations have been isolated from surrounding populations for hundreds to thousands of years due to language, geography, religion, or other factors.

When a population is isolated, the mutations and unique genetic markers generated and commonly held within the population differentiate it genetically from other populations. Other populations have had frequent interaction, migration, and gene flow with surrounding populations, making it difficult to determine which DNA corresponds to historical populations.

To answer such questions and provide ethnicity estimates, each genetic genealogy testing company relies on some basic principles.

While each company uses different approaches to provide ethnicity estimates, these methods share some of the same elements: curation of reference panels, the definition of populations, and probability assignment. 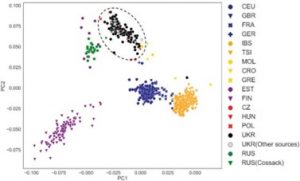 Principal Component Analysis is a process that reduces dimensionality. In the curation of reference panels, it is used as a quality control measure to isolate the unique genetic profiles associated with specific populations. Scotted400, “Principal Component Analysis of European Populations from the Genome Ukraine Project,” Wikimedia Commons (https://commons.wikimedia.org), CC BY 4.0 license. Ukrainian individuals are circled and colors reflect prior population assignments from European samples.

In order to determine ethnicity admixture and estimate the populations to which a test taker’s ancestors belonged in the past, the companies first identify individuals whose ancestors all lived in the same region. The companies use extant public databases as well as samples from their own databases to curate a reference panel of samples for individuals whose ancestry is from a single population.

In this effort, they seek unrelated individuals who do not share large segments or chunks of DNA with each other due to recent common ancestry. They also apply quality control measures such as principal component analysis (PCA) to remove outliers: individuals whose genetic ancestry does not coincide with their reported genealogical ancestry or whose genetic profiles are extremely dissimilar to other individuals from the same tested population. Through this process, DNA testing companies can identify markers of DNA that are only found or are predominantly found, in a single population or in a handful of closely associated populations.

Based on sampling methods, residences of test takers and their ancestors, and genetic similarity between the samples in a population, the companies define regions or populations with unique and distinct genetic profiles. 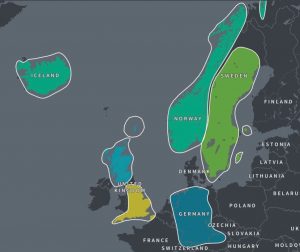 Each company defines populations and regions differently. At AncestryDNA, Danish admixture is sometimes split between Norway, Sweden, and Germanic Europe regions, while at Family Tree DNA, Denmark is included in both the Scandinavia and Central Europe designations. 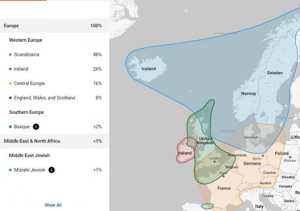 Once a company has assembled a reference panel, it applies different algorithms and approaches to analyze a test taker’s data. Each testing company tests several hundred thousand markers of DNA across a tester’s genome called single nucleotide polymorphisms (SNPs), which are hotspots for genetic variability in human populations. Testing companies analyze a portion of these SNPs as part of ethnicity admixture estimation and consider the prevalence of particular SNPs in specific populations.

Ancestry and 23andMe chop a test taker’s DNA results into smaller chunks or windows of consecutive markers, compare each window to the reference panel and assign the chunk to the population in which its genetic profile is most likely to occur. These chunks and their corresponding assignments are then used to provide percentage estimates of ethnicity regions.

While broad ethnicity admixture estimates provide high-level context for an individual’s ancestry, these communities, groups, and locations can provide specific clues and hints for follow-up in a genealogical investigation.

Ethnicity estimates consider the prevalence of specific SNP markers in a population and assign percentages of ethnicity, based on similarity to a reference panel. The estimates might be anomalous or unrepresentative of expected ethnicity regions due to historical migrations or population characteristics.

A test taker’s assignment to an unexpected community, location, or group could be due to recent misattributed ancestry or a migration pattern associated with a particular area. A tester from Denmark may have connections to descendants of Danish immigrants to the United States, or a tester from Ghana may find connections to communities of descendants of enslaved communities in the Caribbean.

Some individuals who test at multiple DNA testing companies receive different ethnicity estimates from them. These differences and changes are not a reflection of the validity of the underlying science, but rather the differences between the reference populations, algorithms, and approaches used by each of the companies.

Even if users test at a single company, it is likely that over the course of several years they will receive updates to their ethnicity admixture estimates. These updates inevitably cause some to complain of their “lost” ethnicities or decreases in their percentages.

Legacy Tree Genealogists has been at the forefront of genetic genealogy research services for almost two decades. Our team of experts has solved DNA-related cases and can help you solve your family DNA puzzles! Contact us today for a free quote.