In this Legacy Tree Mystery, we reunite a family torn apart for decades and solve the case of the Mysterious Miss Mamie and her disappearance at the young age of six.

Mamie’s mother died just weeks after her fourth birthday. Her father, in desperate circumstances, placed his five young children into orphanages for care. Separated from her siblings and parents, little Mamie Hornberger lost everyone and everything she knew in the fall of 1908. In April 1910, she was still a Lancaster County Children’s Home resident.

The bottom line of this 1910 census enumeration recorded the name “Mamie Hornberger.”

And then, according to her father, she disappeared and was gone without a trace. Mamie’s younger twin brothers, adopted in a neighboring state, managed to find their father once they reached adulthood. At the time of their reunion in 1930, Mamie was still “missing.” 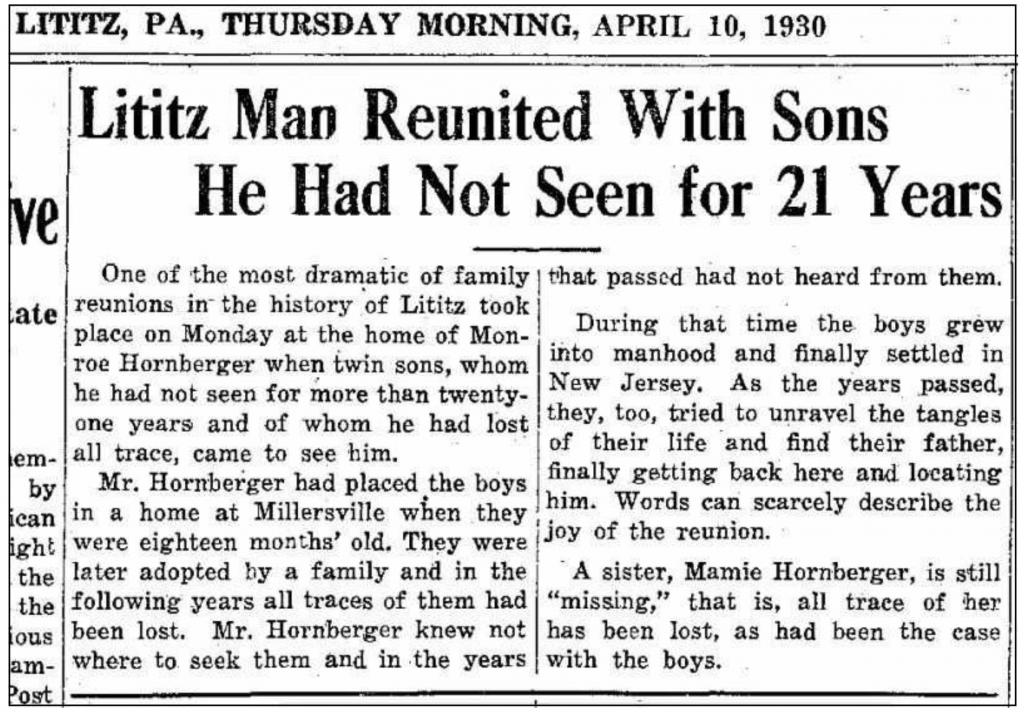 Monroe Hornberger reunited with his sons.

Another newspaper article stated, “The father appealed to authorities to help locate his daughter, Mamie Hornberger, who disappeared under mysterious circumstances similar to that of his sons.”

What happened to Mamie after the age of six? Why was her father unable to find her?

Women can be notoriously more challenging to research than men, partially because of the change of surname upon marriage. In this case, the challenge was complicated because Mamie’s given name was changed upon her adoption at age six. Not only that, but her surname changed at least four times throughout her life.

Almost a century ago, Mamie’s father did not have access to the tools we have today to locate missing family members and solve genealogy adoption mysteries. Autosomal DNA tests and an internet search engine would have likely allowed Monroe Hornberger to find his daughter, but those technological advances were many decades in the future.

Adoption Records in the County Archives

Research in the Lancaster County Archives revealed Monroe knew the names of the couple who adopted his daughter in January 1911 and highlighted important research methodology.

Onsite at the archives, I obtained the referenced book and page number.

Research could have stopped there. However, it is always worth asking an archivist or librarian if they have other unindexed documents or files that relate to a record.
In this case, the local archivist produced the original multi-page adoption file. The file included signed statements from adoptive parents Samuel F. and Mary A. King, Mamie’s father Monroe Hornberger, and the directors of “The Home for Friendless Children” where Mamie had been living. 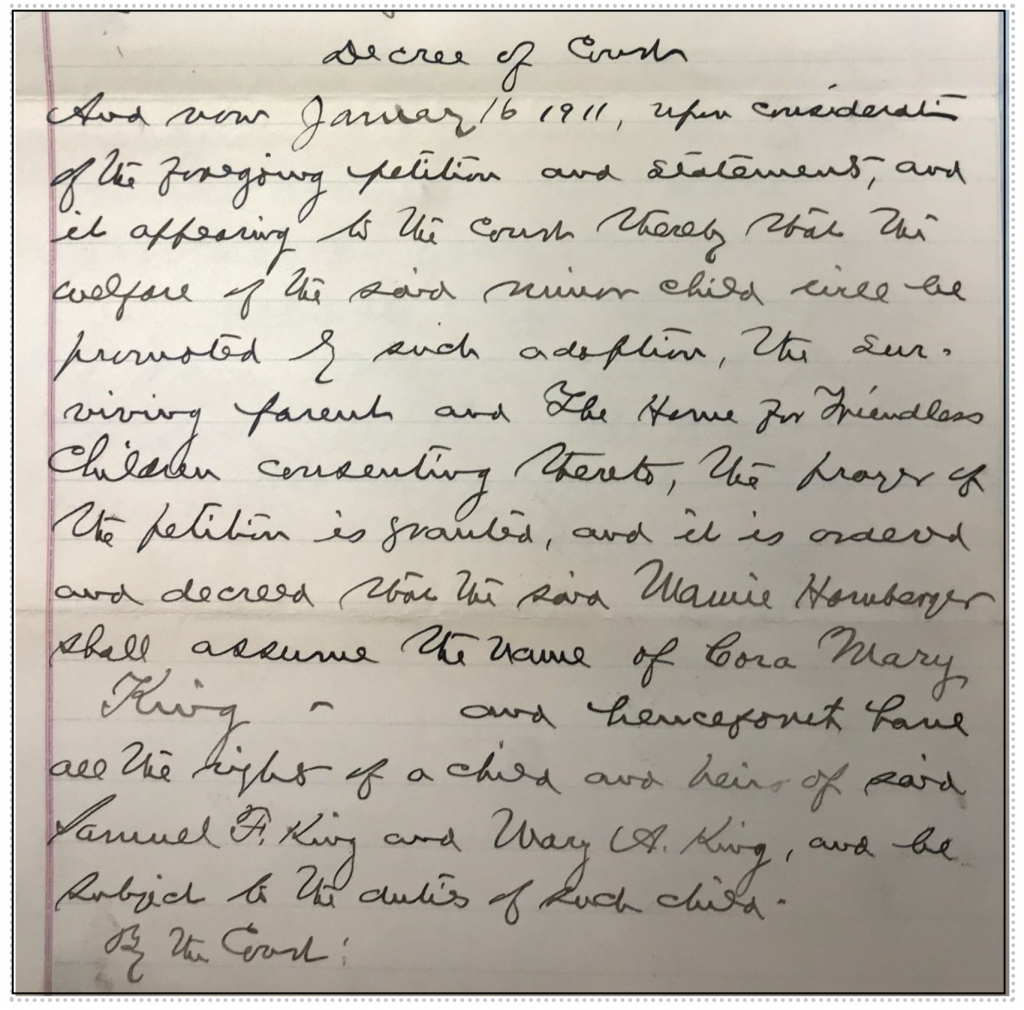 Pieces of the Puzzle

The adoption documents provided the key information needed to continue the search. At the time of Mamie’s adoption on 16 January 1911, six-year-old Mamie Hornberger was renamed Cora Mary King.

In short, I discovered several challenges that prevented Monroe from locating his daughter with the information and communication methods he had in the 1920s and 1930s.

By the time she was fourteen, Cora was pregnant. Close to her fifteenth birthday, in either July or August of 1919, she gave birth to a daughter. The January 1920 census enumeration of the King family contained several errors (Cora’ age and middle initial; Mary C. Walters was listed as the Kings’ daughter rather than granddaughter); however, it did provide one essential clue.

1920 census enumeration for the King family in Philadelphia

The baby’s father was reported to have been born in Michigan. That one detail allowed a search for males in Philadelphia with the surname Walters with the specific birthplace of Michigan. The focused search zeroed in on a likely father candidate: Frank I. Walters.

It appeared Frank and Cora soon moved to Reading, Berks County, Pennsylvania, about sixty miles away. A 1921 city directory listed Frank I. Walters and Cora M. Walters at the same address on Green Street. 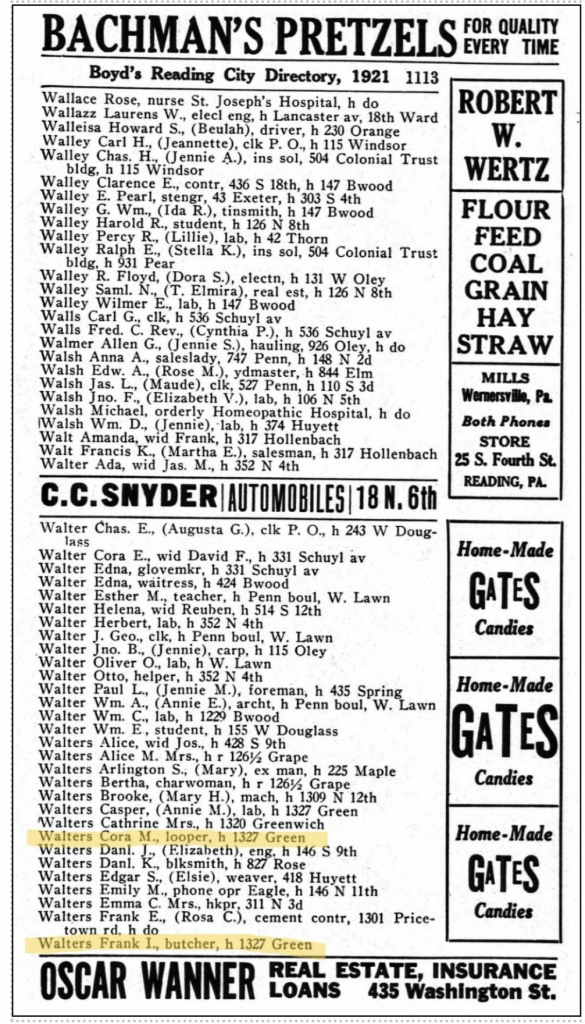 Frank and Cora did not stay together. Her life took many twists and turns. Cora/Mamie was challenging to trace because there were so many changes in her name, both as an adopted child and as an adult woman. Although she never legally married, she took the surname of more than one man with whom she lived. Throughout her life, her names included:

Did Monroe Hornberger ever find his long-lost daughter? Happily, the answer is yes! His November 1944 obituary listed one of his surviving children as Cora, wife of Earl Long of Reading.  Sometime between 1930 and 1944, they must have reunited. Through contacting a DNA match who is a granddaughter of Monroe’s oldest daughter, Della, a family story came to light, shared with her by her oldest cousin who remembered “Aunt Mamie”:

“Della used to go up to a farmers’ market in the Lancaster or Lititz area on a regular basis. One of the vendors there told her, ‘You know, there’s a woman that comes here that looks just like you’. So Della laughed and said, ‘Okay, let her know I’ll be here at this certain time and date and we can meet.’ Mamie showed up and they figured out they were sisters!”

After decades apart, the genealogy adoption mystery was solved and the family was reunited.

Do you have a genealogy mystery you want to solve?

Our researchers care deeply about going the extra mile to obtain local records that could find your missing ancestors and solve your genealogy mysteries. At Legacy Tree, we conduct detailed research in local repositories all over the globe. In the case of Mamie Hornberger, piecing together her story involved accessing records that were not digitized and only available onsite at the Lancaster County Archives.

Monroe Hornberger did not have the resources to find his missing child in 1930; however, we now have genetic genealogy tools and online databases that enable us to identify and locate living individuals and ancestors. Our team of DNA experts uses advanced DNA analysis skills to make sense of your test results and connect you to family.

If a genealogy mystery has you longing for answers, let us help you find them!

Kristin Wenger is a detailed and efficient researcher who is passionate about discovering and sharing the stories of your ancestors’ lives. Kristin honed her genealogical skills through Boston University, ProGen, and advanced courses at SLIG and GRIP. She enjoys challenging research projects with specialties in:· Pennsylvania and its many religious groups· Uncovering the stories of women and children· African American research· House histories and land research· Solving brick wall challenges with advanced methodologyWith an education degree and years of teaching experience, Kristin also loves providing interactive and engaging presentations to genealogy groups and serving as tour guide in her historic hometown of Lititz, Lancaster County, Pennsylvania.

Previous article: 5 Keys to Researching Your Irish Ancestors
Next article: How Genealogy Research Provides Comfort After a DNA Surprise