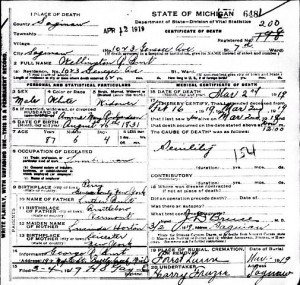 When conducting genealogical research, it is important to remember that some documents are considered a primary source, and some are considered secondary. College history classes spend entire lectures discussing the nuances between the two, but suffice it to say that a primary source is one created as close to the actual event as possible with participants in that event providing the information. A secondary source was created after the event took place and by individuals who likely were not direct participants.

Some records are considered both a primary and a secondary source. An example of such a document is a death certificate. On a death certificate, primary source information would include the date and place of the death, the cause of death, and the location of the cemetery and the funeral home. This is because the death is the main subject of the document, and information regarding the deceased’s passing is testified to by a doctor or other individual who was there, and who can make an accurate, eyewitness statement.

Secondary information would include the deceased’s birth date, birth location, and the names and birth places of the parents. This information is the responsibility of the informant, who, despite often being a family member or friend, was not typically present at the actual birth of the individual, and is often providing this information second- or even third-hand.

As a result, it is extremely important to consider who provided both the primary and the secondary information. Keep in mind, too, that if the informant was a close family member, the individual may have recalled the facts from memory at a time of stress and grieving. Determining the identity of the informant will help you understand their state of mind when providing the names and dates to the registrar, and help evaluate the accuracy of the information.

In most American states, death certificates were not mandated by the civil authorities until the 20th century, though occasionally certain larger cities began doing so earlier. Additionally, many jurisdictions have privacy laws restricting access to all but immediate family members if the ancestor died within the past 20-25 years. If you’re able to find one, however, they can be invaluable resources.

As always, don’t forget to be creative and patient! New collections are becoming available all the time, and it’s an exciting time to be a genealogist!

Previous article: Decoding Genealogy-Speak for Beginners: Pedigree Chart and Family Group Sheets
Next article: The Mary In Your Tree: Solving Genealogy Brick Walls By Reaching Out