In this article we explore several vital record substitutes you can use in your genealogy research when vital records are not a research option. 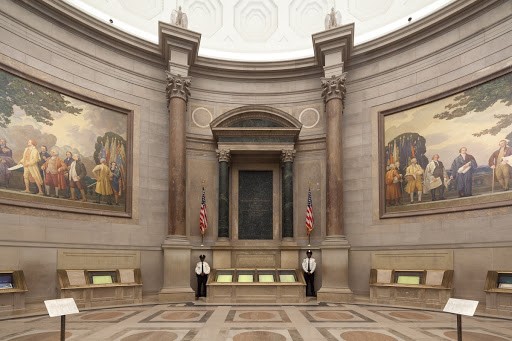 Today, the United States Legislature governs US vital record-keeping including registering births, marriages, and deaths. These vital records make it easier to follow a paper trail from parent to child and extend our genealogies back several generations. However, some states did not mandate vital record recording until the 1900s. Because of this, in certain states we do not have primary records before 1900 that capture each person’s birth date, place, year, and parents. And for some of the states that did require information to be recorded, those records no longer exist for a variety of reasons. How can we continue family history research if the vital record doesn’t exist? In this article, we’ll share three vital record substitutes you can use to identify earlier generations and extend your family history.

Let’s use one of our recent projects as a case study in finding non-vital southern US records to identify ancestors of an early 1800s person. A client was interested in extending her ancestral line from Alexander Hanson Craven born 1806 in Kentucky and died on 1 November 1882 in Raywick, Marion County, Kentucky. Research in the South is often challenging since records are limited – few were created and even fewer preserved. Several counties in the South are known as burnt counties (due to the Civil War) and basically, no records are available. With that said, our searches would need to focus on other avenues outside of vital records to pursue the parental information for Alexander Hanson Craven. We determined it would best be accomplished through three vital record substitutes: civil war pension files, census records, and wills.

As in all research projects, we had to ensure that any records of “Alexander Craven” which we found were actually records for Alexander Craven, our client’s ancestor, and not for someone non-related but with the same name. The best method for verifying ancestral relationship, and not simply a name, is to search for the ancestor within the context of their family unit. Since so many individuals throughout history have held the same name, selecting someone with the right name at the right place and the right time (but not actually your ancestor) can be a common mistake. So, let me take a moment to clarify what I mean by “family unit context.” If you are looking for someone born in England named Jane Williams, you would likely find many hits that match your search criteria. But if your ancestor, Jane, had two sisters and two brothers, and lived with both of her parents and all four siblings, you could isolate that family of seven. When searching for Jane Williams, you would look within records to track her family and not just her individually. And you would eliminate any results where some of the family of seven cannot be verified. You would also not throw out search results with different spelling, as long as the family unit could still be verified (spelling inconsistencies are all too common on historical records). This method of searching for an ancestor within the context of their family is critical to avoid linking with the wrong individual, which of course would make any further research into their ancestors incorrect as well.

Our client knew that their Alexander Craven was married to Lavinia Lucas and they had at least eleven children. Alexander served in the Civil War with six of his sons. Alexander’s parents were believed to be John Craven of Somerset, Washington County, Pennsylvania and Nancy Miller of Nelson County, Virginia.

Civil War Pensions provide details that are often not available on other records. For a veteran to receive a pension he had to prove Civil War service or the veteran’s widow had to provide proof of his service and provide their marriage information. Since Alexander and six of his sons were in the Civil War, looking at Civil War pension records was a good place to start research and see what pension records were available for Alexander and his sons. Most Civil War pension files have not yet been digitized, and therefore must be copied at the National Archives. We ordered the files for Alexander Hanson Craven Sr. and Jr. because he had a widow’s pension file. 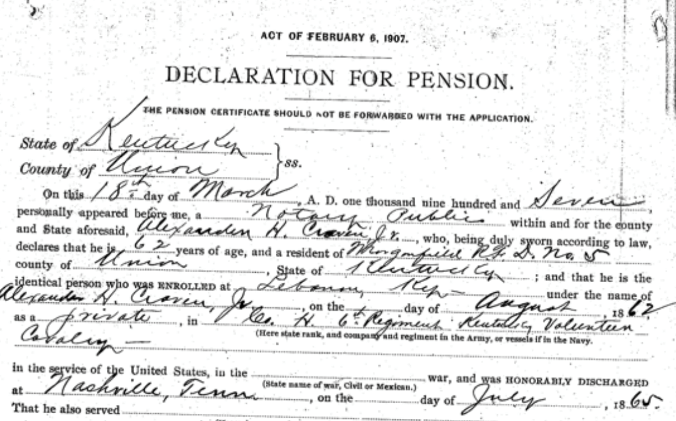 When the files arrived, Alexander Jr.’s file was reviewed for any genealogical information that might help extend his father’s ancestry. Unfortunately, his invalid file contained just information and testimonials about his state of health. The pages in his widow’s pension stated that Alexander Jr. was born on 12 September 1844 in Raywick, Marion County, Kentucky. The other lengthy pages of information detailed how his widow was denied her pension because she could not prove her age or marriage to Alexander Jr. She had evidently married him after his service and therefore was not entitled to a widow’s pension. She did not produce any family information that would help extend his ancestry, though his children and several brothers were listed along with variations of his middle name.

Our search uncovered that Alexander Hanson Craven Sr. applied for his own pension, which was rejected. It was rejected because he did not submit the required paperwork. His widow tried to continue the invalidated pension, but her claim was also rejected because she did not or could not send proof of her husband’s death or her marriage to him. She was recorded as Vienna in some of these records, instead of Lavinia. There was no mention of Alexander’s birthdate or parents’ names. The information did confirm that in the 1840s the Cravens resided in Marion County, Kentucky.

Census Records are beneficial for information and contain every name in the household post-1850.

In 1850, A.H. Cravens was living in Marion County, but his wife’s name was recorded erroneously as Jemima. His household consisted of some of his children: Thomas, R.J., L., Wm, David, A.H., Zachariah, and G.W. Alexander Hanson Sr. was a farmer with $300 worth of real estate. It was imperative to know the family relationships (or context of the family), so that we could verify that this family was in fact the family of our client’s ancestor, even though in the census the wife’s first name was incorrect, only initials were used to indicate Alexander, and the family name was listed as Cravens instead of Craven.

The 1840 US census records only documented the name of the head of household, along with the genders and age ranges of the other members of the household tallied statistically without biographical detail. On this census, Hanson Cravens was recorded with one male under 5 years old, two males between 5-10, one male between 20-40, two females under 5 and one female between 20-40. Based on the estimated birthdates the client provided us, this census record matches his children: Rebecca (age 5), Sarah (age 2), and William (age 1), plus Hanson (age 34) and his wife Lavinia (age 31). The two males between 5 and 10 could be Thomas (age 6) and another unknown male. To this point, our research has shown that Alexander Hanson Cravens has been documented in records as Alexander, Alexander H., Sr., A.H., and Hanson.

Ten years earlier, the 1830 census showed Alexander Craven and presumably his wife Lavinia in his household—both were in the age range of 20 to 30. Since her name was not recorded, she was just listed with a hash mark. The couple lived in Washington County, Kentucky, a different location than later census records indicate. Our research into the formation of Kentucky counties showed that Marion County was not created until 1834. The couple had not moved – instead the county lines changed as a new county was created.

Probate and Land Records were searched for both Alexander Hanson Craven(s) and his presumed father John Craven(s). If John died in 1813 his probate record would be in Washington County, Kentucky. Searching the records of both counties did not reveal any wills or deeds for either of the men, though several deeds were found for Alexander Hanson in Marion County. While these land deeds showed that he lived in Marion County from at least 1864 to 1884 with his wife Lavinia, they did not depict him selling or receiving land from any family members. 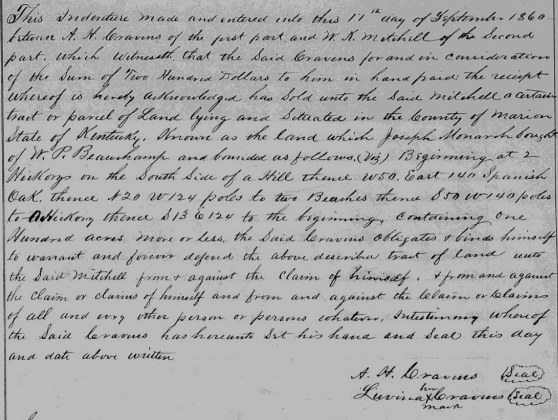 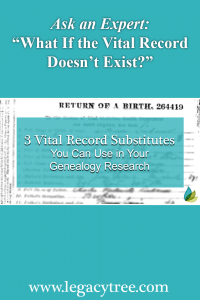 The records of Washington County revealed that the only Cravens selling or receiving land were Levi and Jeremiah Cravens. This Levi could be a presumed uncle of Alexander Hanson and a brother of John, but none of his grantees had the Craven surname. Jeremiah and Levi were settling a dispute between themselves and the heirs of Jost Myers who were: Jacob Swope, Jacob Myers, John Myers, David Myers, Michael Myers, and Abraham Bosley. This certainly implied that Jeremiah and Levi were related, however, the records did not show any connection to Alexander Hanson Cravens or his presumed father John Cravens.

Finally, the records for Nelson County were searched, since it was the parent county of Washington County, which was created in 1792. In so doing, we discovered the will of John Craven which named all of his children, including Alexander Hanson, confirming that John was indeed his father. John’s will has been transcribed as follows (original spelling and capitalization preserved):

At a County Court held for Nelson County on Monday the 19th Day of April 1813.This Last will and testament of John Cravin decd. was proved by the Oaths of Charles Hayden & George Hayden two of the subscribers witnesses thereto & ordered to record whereupon Levy Cravin the Ex[ecut]or Therein named having Taken the Oath prescribed by Law & Executed bond with James Craven & Reason Craven his securities in the penalty of $600 Conditioned according to law. It is Ordered that Certificate of probate of said will be grated the said Executor.
Teste Ben Grayson C.N.C.C.

Besides confirming all of the children of John Cravens and adding to the family an additional daughter, Polly, John’s will provided other clues. First, the fact that his wife was not mentioned suggested that she had died before he wrote it on 17 March 1813. Second, John was doing well financially and was landed with a plantation, several horses, and other animals, furniture, clothing, and other wealth mentioned in his bequests. Finally, his executor was Levi Craven.

We traced Alexander Hanson Craven through the various Civil War pension records, census records, land and probate records to confirm that he was living in Marion County, Kentucky from at least 1864 to 1884 with his wife. The will of his father, John Craven, confirmed their relationship. John Craven’s will also gave the names of all of Alexander Hanson Craven’s siblings and established a relationship link to Levi Cravens, John’s executor.

As you can see, spellings and names were fluid in this recorded documents. Contextualizing the family members and building a timeline substantiated the claim that Alexander Hanson Craven’s father was John Craven. Early southern research requires focus on frequently-changing county and state boundaries in order to find census, land, and probate records. When vital records are not available for research, vital records substitutes can prove relationships and provide the necessary links to earlier generations.

If you’ve hit a genealogy brick wall because vital records don’t exist for your ancestor, let Legacy Tree Genealogists’ staff of experienced researchers help you. We have knowledge of where to look to help solve your “family history mysteries”.  Contact us today to request your free quote.

Previous article: Keys to Making Your Unknown Parentage Case a Success
Next article: How to Use Fire Insurance Maps for Family History Research