DNA to the Rescue! Solving an Irish Genealogy “Brick Wall” 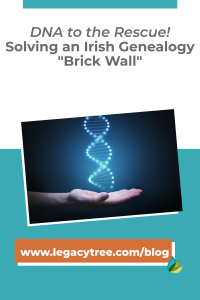