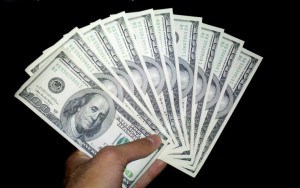 Money. It’s everywhere in the documents we use for genealogical research: census reports, wills, bills of sale, and in the newspapers. I get excited when I see the notation of an amount of money, because it provides some insight into the lives of the people I am researching. That level of insight can be pretty detailed if you know how to convert the historical dollar amounts into their modern equivalents.

One of my favorite tools for doing this is called MeasuringWorth. This free website (which accepts donations) is run by two Economics professors at the University of Illinois at Chicago: Lawrence Officer and Samuel Williamson. It is updated annually. The site provides, among other things, comparative values of historical prices in the United States, United Kingdom, and Australia. They provide a user-guide to explain how to use the various comparators, make suggestions for which of the comparators to use in specific situations, and offer detailed information about their process for those who want to learn more.

The 1860 and 1870 U.S. Census reports included columns for recording the value of the real estate owned by the head of the household, as well as the value of the family’s personal property. Real estate is just that: the land owned by that person, whether farm land, pasture, or a lot in town. Personal property included things such as clothing, furniture, cash, tools, and livestock. It also included slaves.

By using the tools on MeasuringWorth, we can compare the value of the land and property owned in each of those years to each other or today. For instance, in 1860, H.W. Mahoney, a Baptist clergyman living in South Carolina, had real estate valued at $2,000 and personal property worth $12,000.[1] We can assume that Mr. Mahoney was likely to have owned a number of slaves given the enormous value of his personal property when compared to his real estate.

Comparing those amounts with the 1870 census record reveals that Mr. Mahoney’s land value dropped considerably, to $900, while his personal property value dropped to a mere $475.[2] Since all slaves were theoretically freed in 1863 and freed in reality at the end of the Civil War in 1865, this appears to confirm that the majority of Mr. Mahoney’s property was slaves. A quick search of the 1860 U.S. Census Slave Schedule reveals that Mr. Mahoney owned 14 individuals in that year.[3]

But what was the monetary value of the land and the people which he owned by today’s standards? By using the “Relative Values – US $” comparator, we discover that the $2,000 of real estate has a number of comparative values for today.[4] 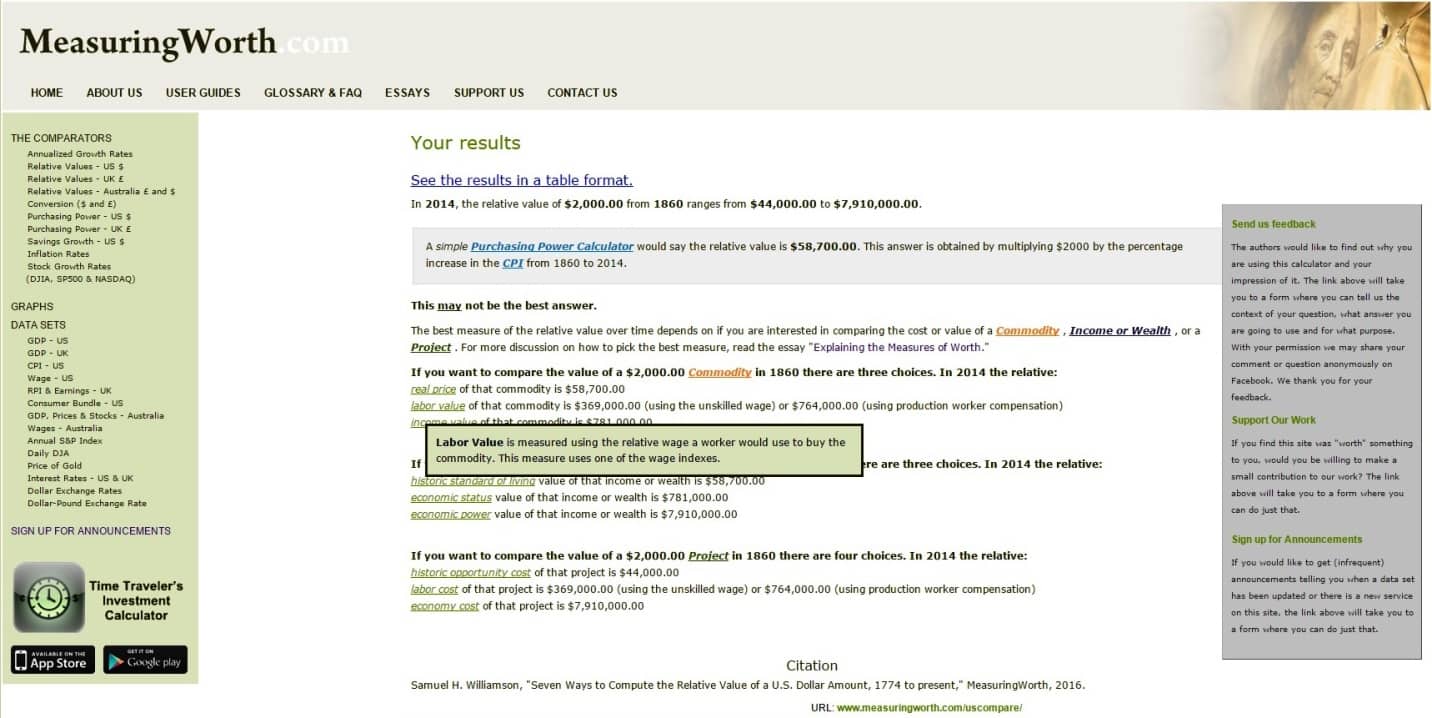 The comparison I use most commonly is the average of the Labor Value comparators. This shows what it would cost a typical wage earner to purchase the same property today. In this case, Mr. Mahoney’s $2,000 worth of land would cost an average worker in the United States about $566,500 to buy that same acreage.

However, there are times when another comparator is more useful. When comparing the value of the Mahoney’s personal property using the “Economic Power” dollar amount, we discover the comparative wealth of Mr. Mahoney. The $12,000 of personal property is comparable to over $47 million in wealth today. When viewed this way it becomes easier to understand why some people fought so fiercely to hold onto their slaves. Those 14 slaves made Mr. Mahoney a very wealthy and powerful man in 1860. 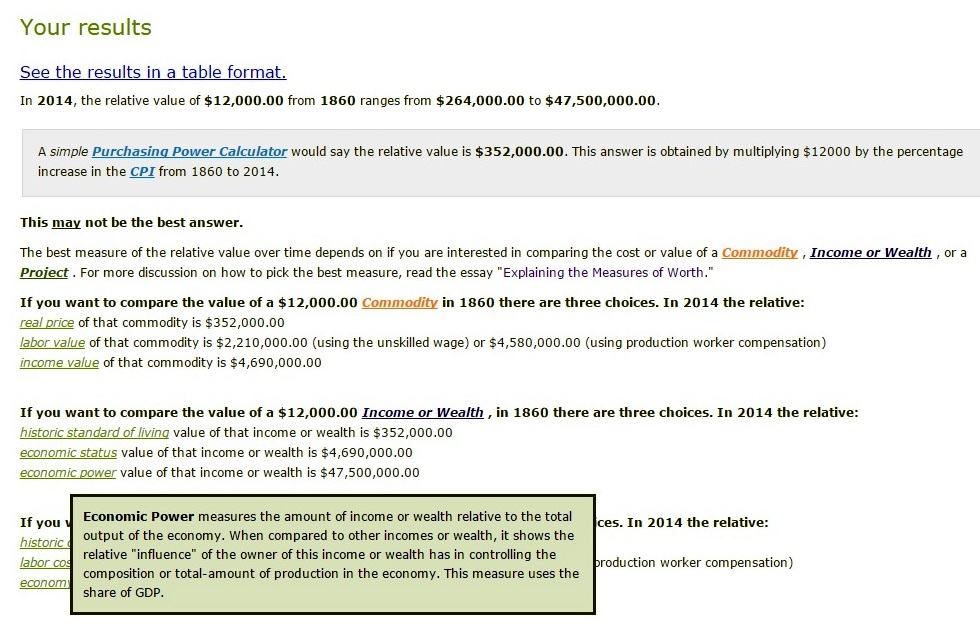 After the Civil War ended, Mr. Mahoney lost his slaves and it appears that he also moved or was forced off of his land, ending up in Sumter County by 1870. Since we are not comparing the same piece of land it is less useful to know that his real estate was valued at $900, or $175,500 using the Labor Value comparator. His personal property value had plummeted to $475, or $92,850 using the Labor Value. If we use the Economic Power comparator, we discover that he suffered a loss of $46,450,000, primarily as a result of the loss of his slaves.

There are two other U.S. census records which include dollar amounts. The 1930 U.S. Census includes the amount of rent paid or the value of the home owned by the head of the household. The 1940 U.S. Census includes that information and as well as some very detailed information regarding the income of individuals. This was important to the U.S. government as a method of determining if the Great Depression was truly ending and if Americans were beginning to earn living incomes again.

Columns 31 and 32 of the 1940 census asked the number of weeks each person had worked in 1939 and the total amount of money that person earned in that time. As the excerpted census page below shows, the wages varied widely, from $78 earned by Albert Pletchers as a waiter to the $2,500 earned by Austin Tasker as a shovel operator.[5] But was either man earning a living wage in 1939? 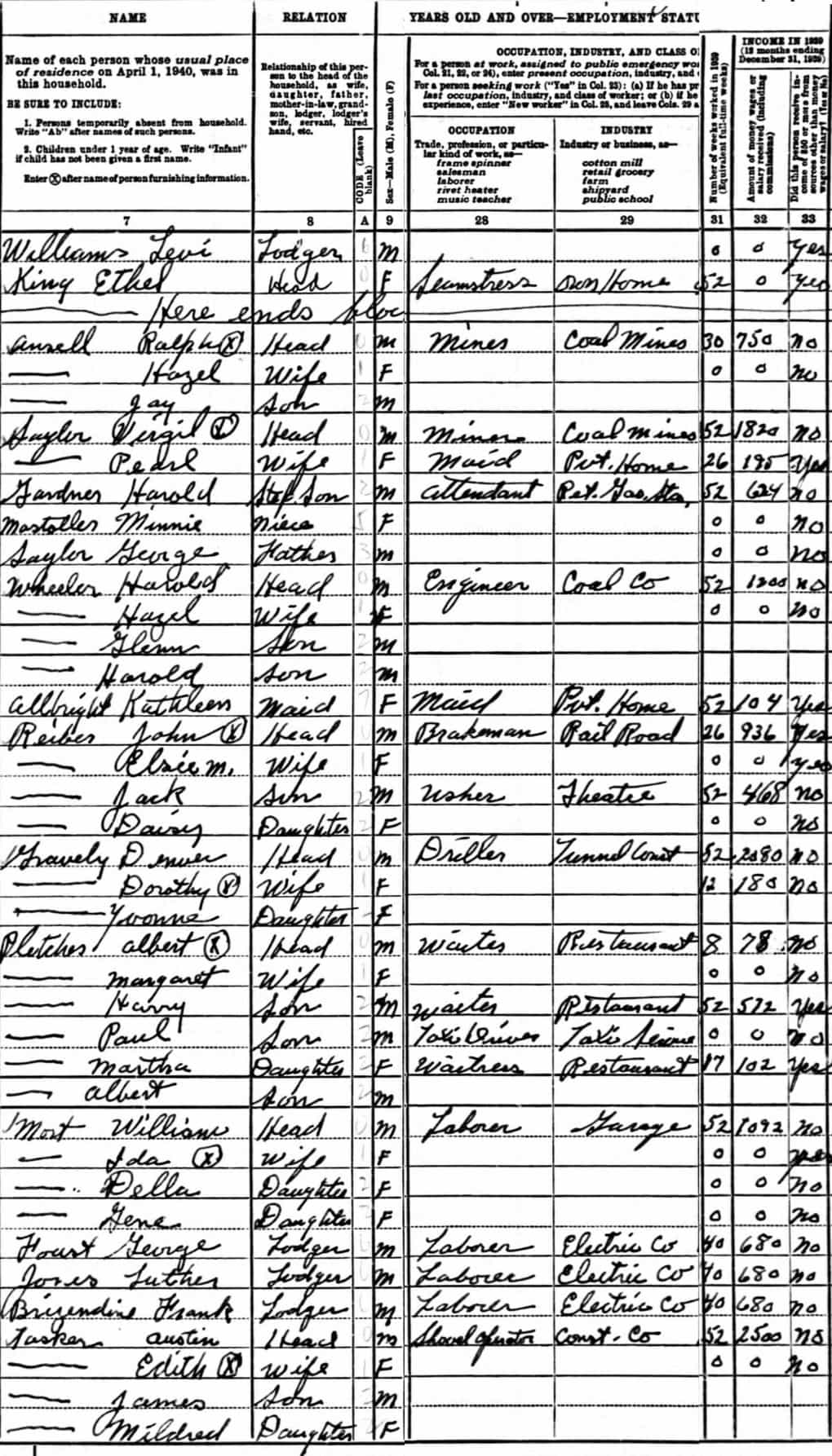 Page from the 1940 U.S. Census showing various incomes of individuals in Somerset, Pennsylvania.

According to all of the comparators, Albert’s income as a waiter was not much money. Whether using labor value or economic power, $78 did not buy much in 1939. Fortunately for the Pletcher family, a son and daughter were also employed and earned money in 1939. Their wages brought the family’s total income to $692, or about $28,000 in modern labor value.

On the other hand, Austin Tasker’s $2,500 earned in construction work was the labor equivalent of $101,200 today, a much more comfortable standard of living than the Pletchers enjoyed.

MeasuringWorth allows for comparisons of monetary values in the United States beginning in 1774. There are some comparators for the U.K. extending back to the year 1270. Australian comparators begin in 1828. There are even very small windows of comparison for Japan and China.

While it is not strictly necessary to know the comparative values of the dollars and pounds which passed through our ancestors’ hands, being aware of their economic standing in their community, or knowing what a great bargain that land purchase turned out to be, or understanding how valuable some possession really was in that time and place helps us to better understand our ancestors.

If you would like Legacy Tree Genealogists to help you learn more about your ancestors, contact us today to discuss your goals! The initial consultation is totally free.

[4] MeasuringWorth.com, accessed January 2016. All economic tables and comparisons in this article are drawn from this website.