The What Are the Odds DNA tool is a free resource to help you compare the probability of relationships with your DNA matches.

The advent of consumer autosomal DNA testing has allowed genealogists to use DNA results to break down seemingly impenetrable genealogical brick walls. Whether your research question is “who is my biological father?” or “who is my third-great-grandmother?”, autosomal DNA can be used to find answers about your origins.

Suppose you’re looking at your DNA match list for the first time. It’s natural to wonder how you’re related to all of these people. A skilled genetic genealogist focuses first on learning how groups of matches are related to each other – only then can we understand how they are related to you.

In the example below, Lisa has taken an autosomal DNA test and has three matches (BH, Trevor Smith, and LP2345) who descend from John Smith and Mary Brown. BH, Trevor, and LP2345 each descend from a different child of John and Mary, and are second cousins with each other. 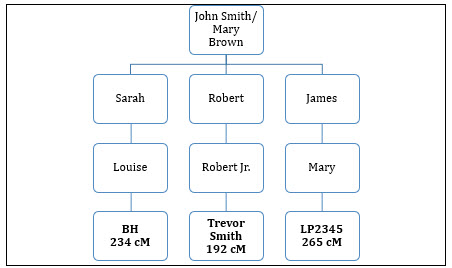 Many tools are available to understand how a given tester relates to any particular DNA match. The testing companies provide a predicted relationship, although these tend to be broad buckets which often don’t include all of the “half” and “removed” relationships. The Shared cM Project is a wonderful resource which provides probabilities for various relationship possibilities based on shared centimorgans (cM) between two different testers.[1] Based on those probabilities, we see that a second cousin or equivalent relationship is the most likely relationship option between Lisa and each of these three testers, although other options are not impossible.

Let’s say Lisa is known to be a grandchild of John Smith and Mary Brown’s daughter Lottie. There were always rumors that Lottie had a different father than her other siblings, and we wonder if DNA can prove or disprove those rumors. We can (and should) review shared matches to see if those matches include connections to distant relatives of John Smith family, as well as connections to distant relatives of Mary Brown family.

However, John Smith was an only child, whose parents were also only children. In that case, the closest available relatives (other than John’s descendants) would be fifth cousins. If candidate testers could be found, it could be difficult to definitively prove a connection to John’s family, since many fifth cousins do not share DNA with each other. What else could we do to determine whether Lisa is a half or full second cousin to BH, Trevor, and LP2345?

The What Are The Odds DNA Tool

Enter WATO, the “What Are The Odds?” Tool from the website DNAPainter.com. What Are the Odds (WATO) uses probability data from the Shared cM Project and computes the relative probability of various hypotheses of how a tester might relate to their matches. Any hypothesis which is theoretically possible receives a positive score, and impossible options are scored with a zero. The scores are relative, rather than absolute, so a score of 100 in one WATO chart might be the clear favorite option, while a score of 100 could be a very unlikely choice on another WATO chart.

Clear as mud? Let’s dig deeper. In the example above, two hypotheses were entered:

Those of us who have made more than 40 trips around the sun may struggle to read the teeny-tiny print detailing the scores in the graphic above. The summary chart at the bottom of the page provides the scores as well as the detail behind them in a much larger print size. 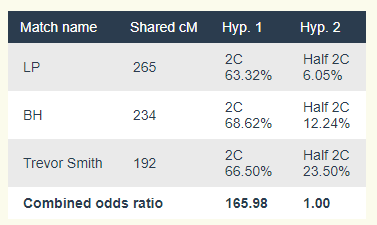 In this case, WATO tells us it’s 166 times more likely Lisa is a full second cousin to BH, Trevor, and LP2345, and that the rumors about Lottie’s paternity were almost certainly false.

However, many times the data is not so clear. Here’s a summary (with match names obscured) from a client project. At first glance, 30739 looks like a fantastic score, but it’s only 3 times higher than the next score of 10093. We can feel confident in discarding Hypothesis 5, but more tester data is needed before we can be sure about the relationship between this tester and his matches.

WATO has a few limitations: it is not designed to work when multiple relationships, pedigree collapse, or endogamy are present, and is less effective for more distant research questions. The original version of WATO recommended avoiding matches sharing 40 cM or less, and while version 2 is more flexible on that point, the tool is most effective for hypotheses involving fairly recent ancestors, preferably second great-grandparents or closer. Research questions for third great-grandparents can sometimes be answered with WATO, but usually require a large number of data points.

Tips for getting started

This article is intended to be a “why-to” rather than a “how-to”, but we’ll give you a few pointers to get you started.

What Are The Odds is an advanced DNA tool with a bit of a learning curve, but is worth the time and effort for serious genealogists to better understand how to evaluate hypotheses and draw conclusions from autosomal DNA results.

Do you have a genetic genealogy mystery you would like help resolving?  Our team is experienced at utilizing DNA evidence from all major testing companies in combination with thorough records research to break down the genealogy “brick walls” in your family tree. Request your free quote now! 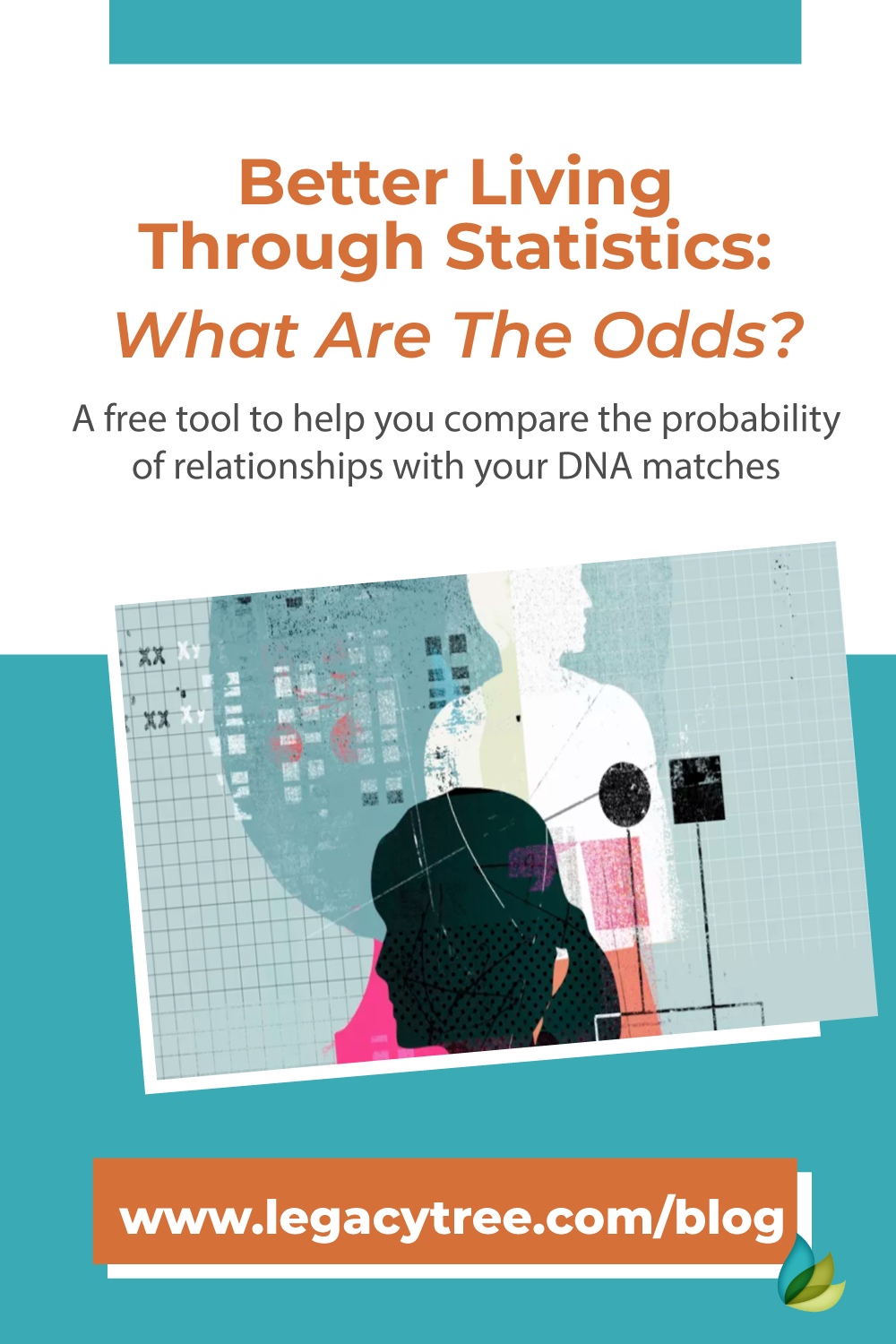 Previous article: Digging Into Your Chinese Ancestry: Chinese Repatriation of Bones
Next article: Top 3 Resources to Trace Your Ancestry in Guatemala