All of the images included in this article are used with the permission of their owner, Zane Healy.

A bemused friend recently contacted me about a posting on a memorial page website. According to the memorial, the gentleman in question was born in 1752, served in the American Revolutionary War, and died in 1845. Attached to the memorial were three photographs: the ancestor’s tombstone, the cemetery in which he was buried, and a photograph of the deceased. In the photograph the gentleman looks to be about 25 or 30 years old and is standing outside, dressed very handsomely in trousers, vest, frock coat, tie, and hat.

A bit more research found the same photograph on more than a dozen different online family trees at various websites. Even a Google search of the man’s name includes this photo in the results. So what’s the big deal? Why did my friend contact me about the photograph? This is simply one of those good-fortune situations where the family had and maintained a photograph of one of their beloved and respected founding members, right? 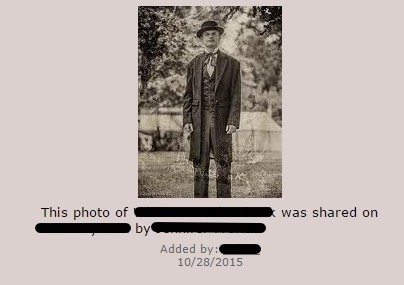 The photo in question.

The friend who contacted me is Zane Healy, a gifted photographer I met at a Civil War reenactment many years ago. The photograph in question is one that Zane took at a reenactment in the Portland, Oregon area on 30 June 2012. Here, from his Flickr page, is the photograph which has been making the rounds masquerading as someone else: 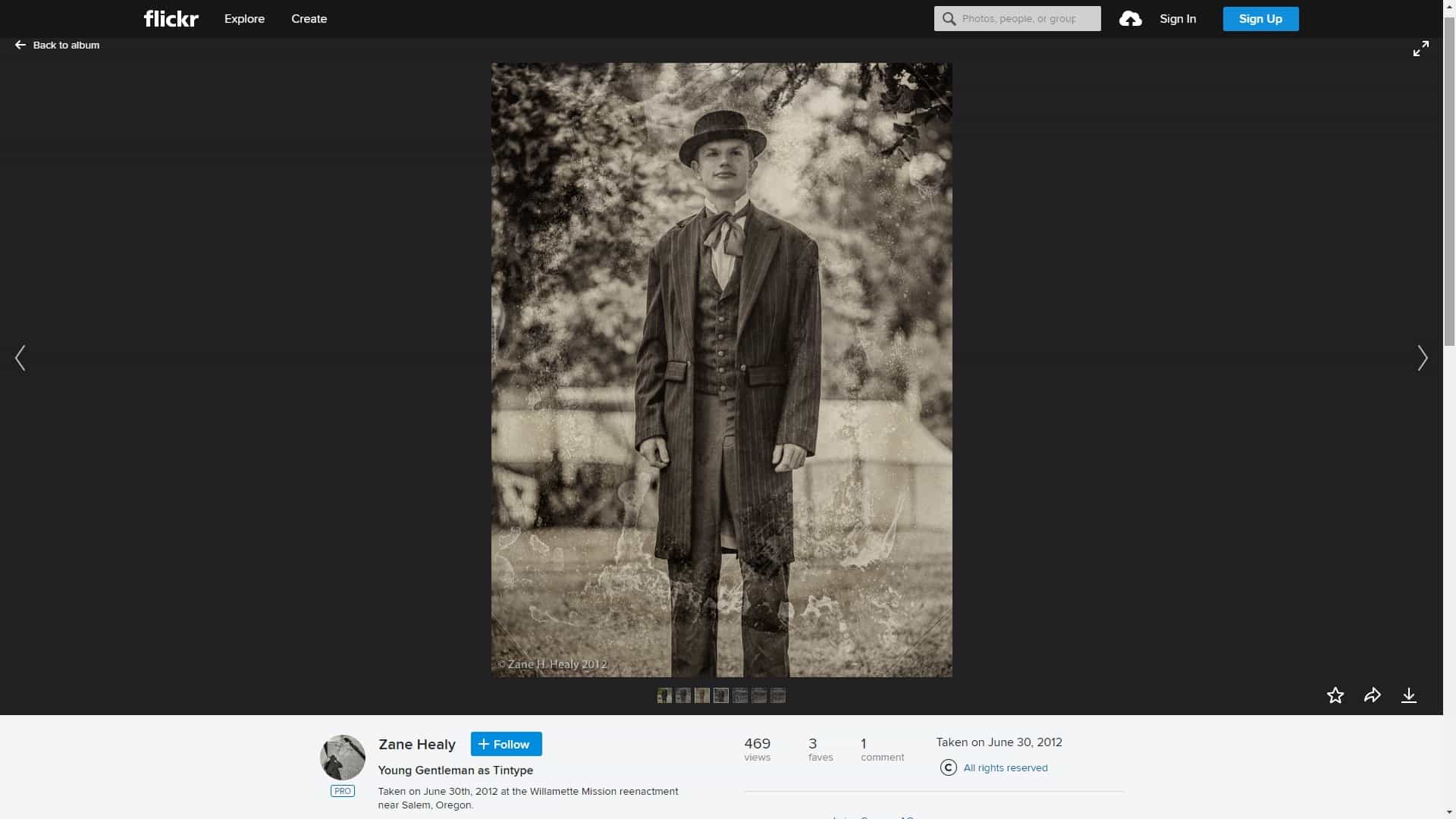 The photograph with its proper attribution, taken in 2012, about 240 years later than claimed.

Those of you with a keen eye will note that in the bottom left corner of the photograph Zane has clearly noted his copyright to the photograph.

Every version of the photo that we could find online has that portion of the image neatly cropped off. That means that, regardless of the intent of everyone who posted the photo after the first person did so, that first person appears to have intentionally removed any evidence of Zane’s copyright.

There is one other page on Zane’s Flickr account that you should see–the original image of this young man in glorious color. 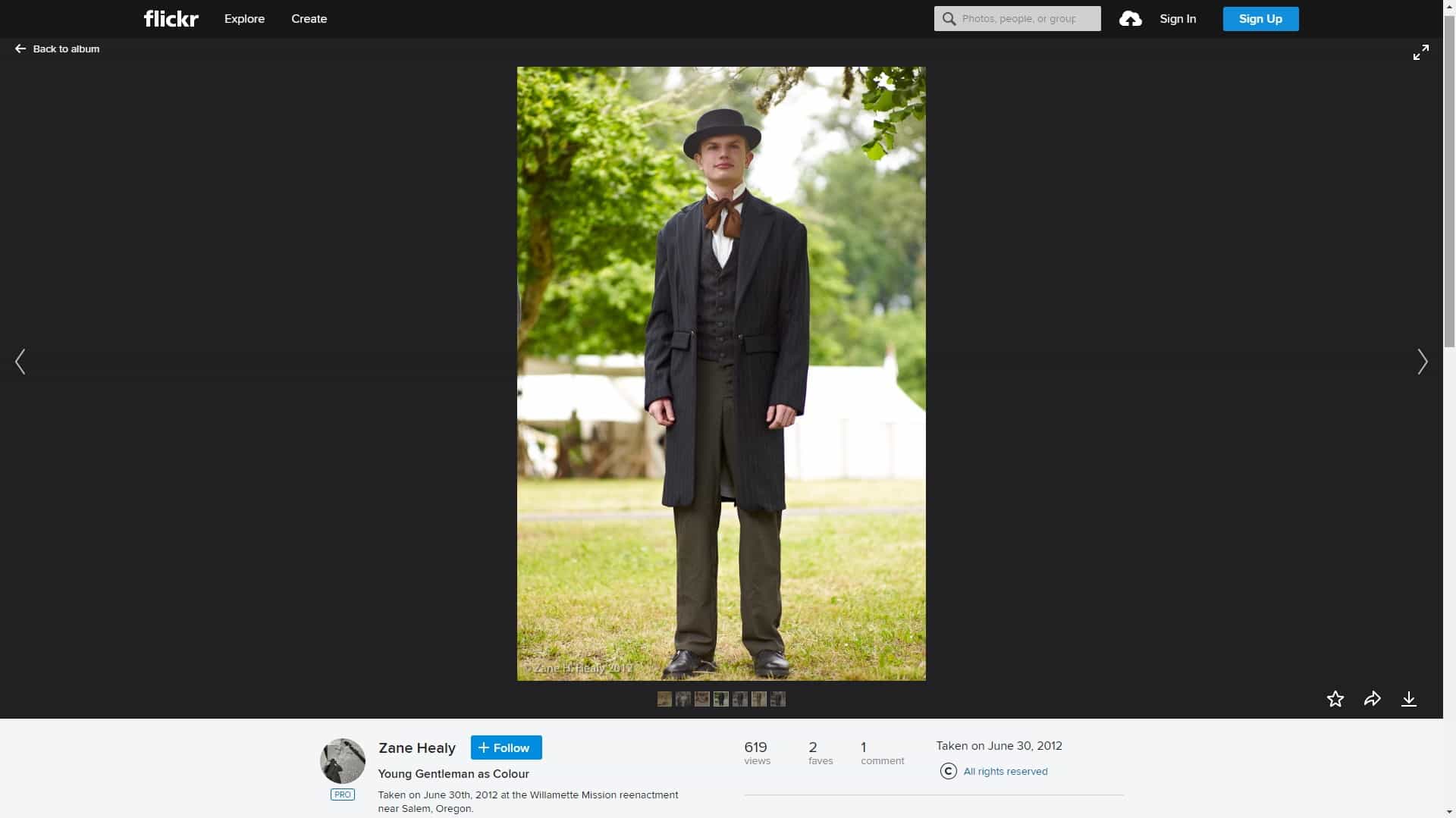 Which leads us to the whole point of this article: when you are looking around online, remember that things are not always as they seem and it is important – no, it is your responsibility – to verify every piece of information before using it or passing it along.

Some may protest that verifying photographs is practically impossible. Not so. I’d like to share several steps you can take to help determine or verify the identity of the subject and the accuracy of the information attached to the photograph.

First, photography was not invented until the 1800s and the first photograph to include a human figure was made by Louis Daguerre in 1838. In this case, the photo supposedly of the Revolutionary War soldier clearly shows a young man, yet the man would have been at least 86 years old by the time his photograph could have even been made. That’s a great indication that the information isn’t accurate.

Second, research into fashion informs us that well-dressed gentlemen did not begin wearing long trousers as is seen in this photograph until the 1830s or later. The hat is another clue that this photograph is from the mid-1800s, not late 1700s.

A third method for verifying photographs is Google’s image search. This is easy to use and, in my opinion, a necessary step before adopting an image as your own. Simply link to the URL in question and Google will search the internet for the image. Doing so immediately brought up Zane’s Flickr page which notifies everyone that this is not a Revolutionary War image but a modern photograph — and that it is copyrighted.

This brings us to a final very important point: no matter how wonderful that photograph is, if it is copyrighted, it belongs to someone else. And that means that ONLY the owner of that photograph has the right to decide where his or her image can and cannot be posted, duplicated, or used. For more detailed information about this, see Judy G. Russell’s excellent article “Copyright and the old family photo.”

The lesson to be learned here is that it is always worthwhile to spend that extra time to do your homework and make sure any information you find is as accurate as possible so that your work will be viewed as trustworthy. Never assume that others have already done the work for you!

At Legacy Tree Genealogists we have experts who are trained in verifying and proving the accuracy of all your family information, and we can help you determine the authenticity of old photographs as well. Contact us and let’s get started!

Previous article: All in a Day’s Work: Using Apprenticeship Records to Trace Your Ancestors from the United States to England
Next article: Four Historical and Geographical Tips to Help You Trace Your Irish Ancestors