Legacy Tree Genealogists’ Sharon McWilliams specializes in British Isles genealogy research. In this article, she discusses enlightening resources, or “hidden jewels,” in London that may help you trace your family history in the British Isles.

Records that have been digitized can be downloaded immediately at no charge, simply by registering at The National Archives website. If a document has not been digitized, a search can be requested for a minimal fee. If successful, you will receive the estimated cost for a digital copy of the records you request.

A Unique Gem May Be the Most Valuable – The Discovery Catalogue

With so many resources available in The National Archives catalogue, it can be important to use the “Advanced Search” option to allow you to focus your search more precisely. Sometimes a search will yield only a handful of records that you can easily sort through, while other searches will result in hundreds or even thousands of results.

For example, when researching John Berry, a Londoner in the mid-19th century, just entering his name in the search engine produced 6,130 results. When we utilized the “Advanced Search” feature and searched for the phrase “John Berry,” the total number of records was significantly reduced (only 1,854), but still too many to sort through. 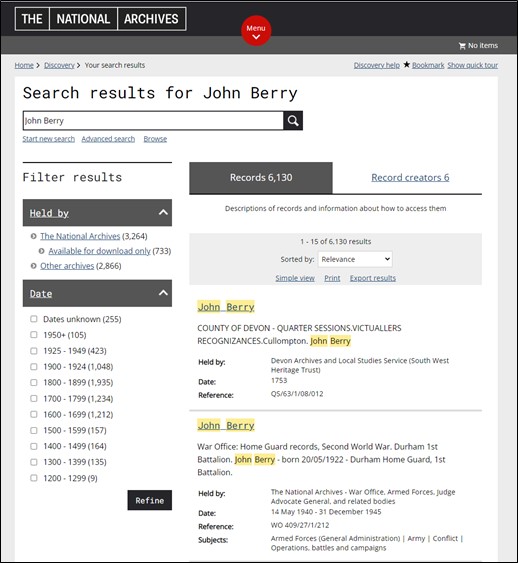 More than 6,000 results for John Berry

However, through our research, we had learned that although descended from a family of shipwrights and sailmakers, John became a Coach Lace Weaver (a skilled laborer who wove silk into trimmings, tassels, and lace that adorned the fine carriages of the day). By entering this unique profession along with the Berry surname, a single record was offered. 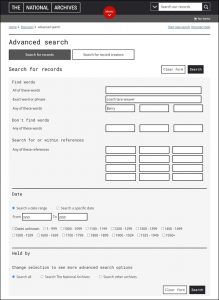 Using the Advanced Search feature with the Discovery Catalogue

Using this record, we discovered that John Berry, our target ancestor, had been imprisoned in 1834. He had been accused by his employer of “leaving his work unfinished.” This bit of negligence had landed John Berry in the Middlesex House of Correction for a term of three months. In a trial at the Bow Street Police Office in May of 1834, an effort was made by John’s family and friends to seek clemency. Petitions and letters of support were filed by his wife, brother-in-law, and others, to no avail. John Berry was forced to serve out his term.

Transport Yourself in Time

Remember, when searching these archives, you may find more than just a document. You may be able to capture a glimpse of your ancestor’s daily life in these records. Sometimes it might be in their own words, through a testimony, or even in their handwriting as a letter of petition. This is true not only when they have been accused of a crime, but also if they had born witness for the plaintiff, or the victim, or if they had been a victim themselves.

This is where the records from the Old Bailey, the chief criminal court for London, can be useful. You can find searchable written transcripts of the Old Bailey Proceedings at https://www.oldbaileyonline.org. These records can provide a fascinating insight into an earlier time.

The Old Bailey also provides documents of transport records to Colonial America, the West Indies, and in later years, to the penal colony of New South Wales in Australia. You can learn more about these records in our case study, Stolen Handkerchiefs and Convict Ships: Tracing a Convict Ancestor to Australia.

Other enlightening resources for British Isles genealogy research include digital copies of wills dating from 1384-1858, which are held in the digital Prerogative Court of Canterbury (PCC). Although you will not find any original documents here, they are handwritten copies of the original probates.

All wills are different. Some of them are brief and others are quite detailed. Information that can often be found includes the name, date, and profession of the individual, and where they lived. Family members, executors, and witnesses are often provided as well. Be sure to throw a wide net when doing this kind of exploration!

The lineage of the previously mentioned John Berry, the Coach Lace Weaver, was extended two generations through the will of his Great Aunt, Mary Berry. Mary was a spinster from Bermondsey, Surrey, with no children of her own. She passed away in 1807 and her will bequeathed her money to her nieces and nephews. She listed them all by name, referenced their late or living parents (Mary’s siblings), and provided the married surname of the women who were wed. 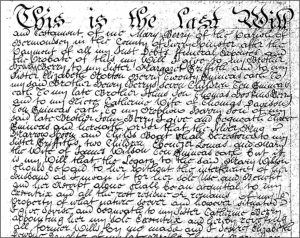 Digital copies of all the wills can be downloaded for free. These documents have yet to be fully transcribed, so you will need to immerse yourself in deciphering the old English script of the church court clerks. This may sound daunting but it is also exciting, as this could be a chance to unearth a yet-to-be-documented family connection!

If reading script is not your cup of tea, this is the perfect time to hire a Legacy Tree Genealogist to uncover these British Isles gems for you. Contact us today to request a free quote!

Sharon holds a Bachelor of Arts from UCLA, and a Certificate in Genealogical Research from Boston University. With over 15 years of genealogy experience, Sharon utilizes a combination of genetic DNA analysis and traditional research to help people uncover their family mysteries. Sharon has specialized interest in Southern Colonial ancestry, the British Isles, and Danube Swabian settlements.

Previous article: Where to Test? Genetic Genealogy Testing Options
Next article: What Can You Do with Legacy Tree Genealogists’ Research? Meet Some of Our Affiliates!