*This story of tracing immigrant ancestors is shared with client permission. Names have been changed to protect privacy.

At Legacy Tree Genealogists we enjoy working with clients from all over the world, especially as they trace their immigrant ancestors through multiple countries. We were especially intrigued when a recent Brazilian client explained that in the process of immigrating from Yugoslavia to Brazil, her great-grandparents, Joseph Wright and Emily Horvay, had spent several years in the United States. In fact, her grandfather, Joseph Wright, had been born in Racine, Wisconsin, during that time period. We were asked to gather as much information as possible about the time they spent in the United States as well as their early years in Yugoslavia (now Croatia). We were fortunate to find many interesting records about this family.

Joseph Wright and his wife Emily lived in Racine, Wisconsin, for much of their time in the United States. According to the 1920 census, Joseph and Emily lived at 1044 Franklin Street in Racine that year with their four children: William, 5; Elizabeth, 4; Joseph, 2 years and eight months; and James, 5 months. Joseph owned the home with a mortgage and rented parts of the home to two other unrelated families, probably as an additional source of income.

Joseph Wright had arrived in New York City, New York, nine years earlier on 7 July 1911 aboard the ship S.S. Adriatic. The Adriatic had left Southampton, England, just nine days earlier. On the passenger list, he reported that he was Croatian from the town of Mlinska, Austria-Hungary, and that his birth was in Austria. His nearest living relative was his wife, Emily Wright, in Mlinska, meaning that Joseph married Emily Horvat before he came to the United States. By the time Emily Wright arrived on the S.S. Franconia from Liverpool, England, in Boston, Massachusetts two years later on 24 October 1913, Joseph had moved to Racine, Wisconsin.

Despite thorough searching, we were unable to find any naturalization documents for Joseph Wright. It is possible that he never naturalized, particularly if he only lived in the United States for a short time. It may be that Joseph began the process but never completed it. We also found that when Joseph and Emily left the United States, they did not fill out passport applications—an indication that they were not U.S. citizens.

Vital records were ordered from the Register of Deeds in Racine. Joseph and Emily’s immigration papers implied that they were already married before they came to America, so no marriage certificate was on file in Wisconsin records. We did, however, obtain the birth record of Joseph Wright for 2 May 1917 in Racine, Wisconsin. His parents, Joseph Wright and Emily Horvat, lived at 1620 Hamilton Avenue, Racine. Joseph’s birthplace was listed as Hungary, and Emily’s as Austria. The birth record accounted for two older siblings for Joseph.

Birth certificates were also ordered for Joseph’s three Wisconsin-born siblings. Several new facts were learned about the family from these records. For example, we know that Joseph and Emily Horvat had five children, but one died before their son William’s birth in 1914, because all of the birth certificates except Joseph’s mentioned a deceased child. Perhaps Emily was pregnant or already had a child when Joseph immigrated to the United States. It also became clear that the family moved around frequently, never living in the same home for two consecutive births.

Church records for Dauphin County, Pennsylvania, and Racine County, Wisconsin were searched for Joseph’s family. According to the client, Joseph Wright was baptized in the First Lutheran Church of Racine. The church was built at 700 Villa Street in Racine in 1849, and the sanctuary where Joseph and his family likely worshiped was dedicated in 1897. 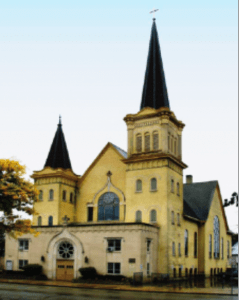 We searched the 1918 Racine city directory for a list of contemporary churches, and contacted the First Evangelical Lutheran Church of Racine to request the Wright family records and were generously provided with the birth records of Joseph and his three siblings.

City directories help pinpoint a person within a certain place and time and include useful information about nearby churches, cemeteries, and municipalities, as well as other same-named individuals in the vicinity. The table below is a compilation of the Wright family’s known addresses during their time in Racine, gathered from a variety of sources including city directories.

A World War I draft card was found for Joseph Wright living in Racine at 1620 Hamilton Avenue. He reported that he had declared his intention to become a citizen, that he had been born in Germany, and that he was currently a citizen of Germany. Joseph’s occupation was a machinist at Mitchell Motor Co., by which he supported his wife and three children. Later known as the Mitchell-Lewis Motor Car Company, a custom automobile manufacturer, Mitchell built everything except for the wheels, tires, and electrical equipment. The company closed down after a period of disastrous model specifications, poor publicity, and World War I. 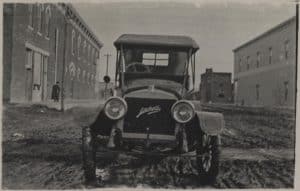 A physical description of Joseph was also provided on the second page of the registration; he was medium height and build, with brown eyes and dark brown hair and suffered from no disabilities. Although his nationality and the spelling of his surname differed from most other records, the street address, number of children, and employer of this Joseph were perfect matches.

The Racine Daily Journal published an article in 1917 that listed Joseph Wright and other “Mitchell Workers” as purchasers of $100 of liberty bonds. During World War I, the United States Treasury Secretary encouraged all Americans to purchase government bonds called Liberty Loans. Well-known graphic artists created advertising. The posters rarely used the word “war,” and war bonds were always called Liberty Loans or Liberty Bonds. Bond purchasers could redeem the bonds at 3.5% interest later, while furnishing the government with cash necessary to the war effort in the present.

A Brief History of Mlinska

According to passenger lists, both Joseph and Emily were from Mlinska, specified in Emily’s record as part of Croatia. Mlinska was a village near the town of Hravostac, Croatia. In 1865, the landowner in Daruvar, Baron Tikery, needed some cash, so he had an old oak forest cleared and taken to the nearest train station. Thousands of acres around Daruvar and Pakrac were now useless, so Baron Tikery divided the land into village lots. His estate administrator found purchasers, mainly the sons and daughters of ethnic German settlers in Hungary. Thousands of settlers rushed to the newly opened area, eager to leave the ravages of the Thirty Years War in central Europe. The village was called Hrastovac, and small neighboring villages (including the Lutheran village of Mlinska) were established at the same time according to religious beliefs. The geopolitical context of frequently changing boundaries in Europe during this era explains why the Wrights were sometimes referred to in American records as German, Hungarian, and Austrian, and how all three can technically be correct.

After the First World War, many families, including the Wrights and the Horvats, left Mlinska and emigrated to North and South America. They were fortunate, as World War II was a terrible turning point for the Danube Swabians living in the Kingdom of Hungary. Even though they had lived for over 200 hundred years in their adopted homeland of Hungary, the hatred of other Hungarians towards Hitler’s regime “spilled viciously over them” as ethnic Germans. The village of Mlinska was attacked by Partisans in 1942, and many people were killed or shipped off to “starvation camps.”

Transcribed Croatian church records provided further proof that Joseph Wright and Emily Horvat were from the village of Mlinska, near Hrastovac. The passenger list for Emily Horvat Wright reported her father as Edvard Horvat. Emily’s baptism was then discovered in the transcribed parish records. She was born 16 December 1892 in Mlinska to Edvard Horvat and Emily Broz and baptized four days later on the 20th by Mihaly Grbics, a Greek Catholic priest from Pasian. Mlinska and Hrastovac were small villages that lacked resident priests. The villagers would have their children baptized by whichever religious authority was in the area, regardless of the denomination of the priest in question. The Evangelical Lutheran parish records indicate that Mihaly Grbics performed all of the christenings between August and December 1892, suggesting that the regular Lutheran priests were away or ill at the time. Emily’s parents, Edvard Horvat and Emily Broz were marked “Evang,” confirming that they were not Greek Catholic. 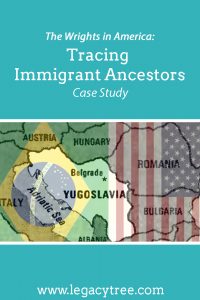 Although our allotted research time came to an end at this point, there are still many records available to continue tracing the Wright and Horvat families back in time. We were pleased to have learned so much about this family during their time in the United States through a variety of records such as census, immigration, newspaper, military, and church records. They are representative of a unique group of people who, though ethnically German, had followed economic opportunity and fled oppression through several countries before settling in South America. Our client shared: “When I started reading the first line of my family report I was not able to stop. I was so excited reading my own family history and many details that I didn’t know about. Thank you for the good job and a very professional and organized report.“

Do you have multicultural immigrant families in your family tree? Let us help you bring their stories to life! Contact us today for a free quote.