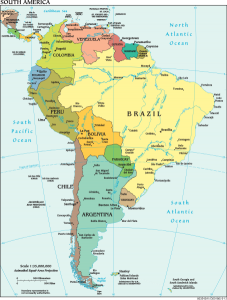 South American genealogy research can be tricky, and we frequently have clients who don’t know where to begin, or run into a brick wall. We asked Gerardo, one of our onsite researchers in Chile,  to share some insights into tracing South American ancestry.

Two of the main things to pay attention to when conducting genealogy research in South America are keeping track of the surnames one is searching for (so you don’t get derailed onto an unrelated line), and the history behind the scribes of some of the most important records used to research in South America. In this post we’ll talk a little bit about each of these factors.

The practice of inheriting two surnames can be a double-edged sword because this can either help make your job easier as a researcher as you follow unique double surnames, or can derail you if there is more than one family with the same double name–which is common in some locations. In order to make sure you the records you’ve found are for the correct ancestors, it is very important to check (and recheck!) your facts, preferably using more than one source. This is an especially important thing to consider when you’re flipping through the pages of any christening, marriage, or death record of the Catholic church. Don’t just stop when you find one match that appears to match your ancestor. Be sure to extract all potential matches and then use other details to determine which one is correct.

The second factor has to do with the power and influence the Catholic Church had at the time during the era of the invasion. Priests and Church leaders had most of the power in South America at the time. This was a volatile situation for the conquering parties trying to control such a vast area. The Catholic Church feared an uprising and did not have enough pure blood Priests loyal to the Spanish Royal Family available for all the areas conquered, so they delegated a lot of responsibility to local priests. The decision to use local priests may have been good for them, but it can be bad for genealogists because clerical errors were common. Orthography was not consistent; some parishes were very large, meaning the priest may not have known parishioners personally; sometimes parish records were copied from other previous records making them derivative sources – all of which contributed to record inaccuracies and errors. When researching in South America, a genealogist has to keep this in mind. You must be ready to see variations in name spellings, dates, places, and locations. Anything that looks even remotely like a potential match should be considered.

Here’s an example from my own personal research. In the case of the Ordenes family, I was looking for an ancestor 5 generations back. From previous research conducted, I knew that Mr. Esteban Ordenes was married at the ¨El Carmen¨ Olivar, O´Higgins, Chile Catholic Church 28 March 1838, and that his daughter’s name was Maria Gavina Ordenes Gelvez, who was born in 1840. 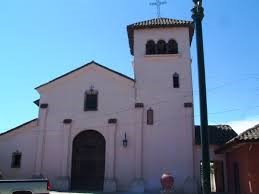 Using this information, I found a reference to a marriage record for Esteban Ordenes that unfortunately lead to a dead end. In 1842, Esteban himself went looking for his own marriage record. Esteban explained to the priest that he was married there and even gave him the name of the priest that married him, yet the current priest could not find the record. So, in 1842, the priest made note of this and wrote down what had just transpired. The record I found only stated that Esteban claimed to be married there, with nothing to prove it because the record was lost. 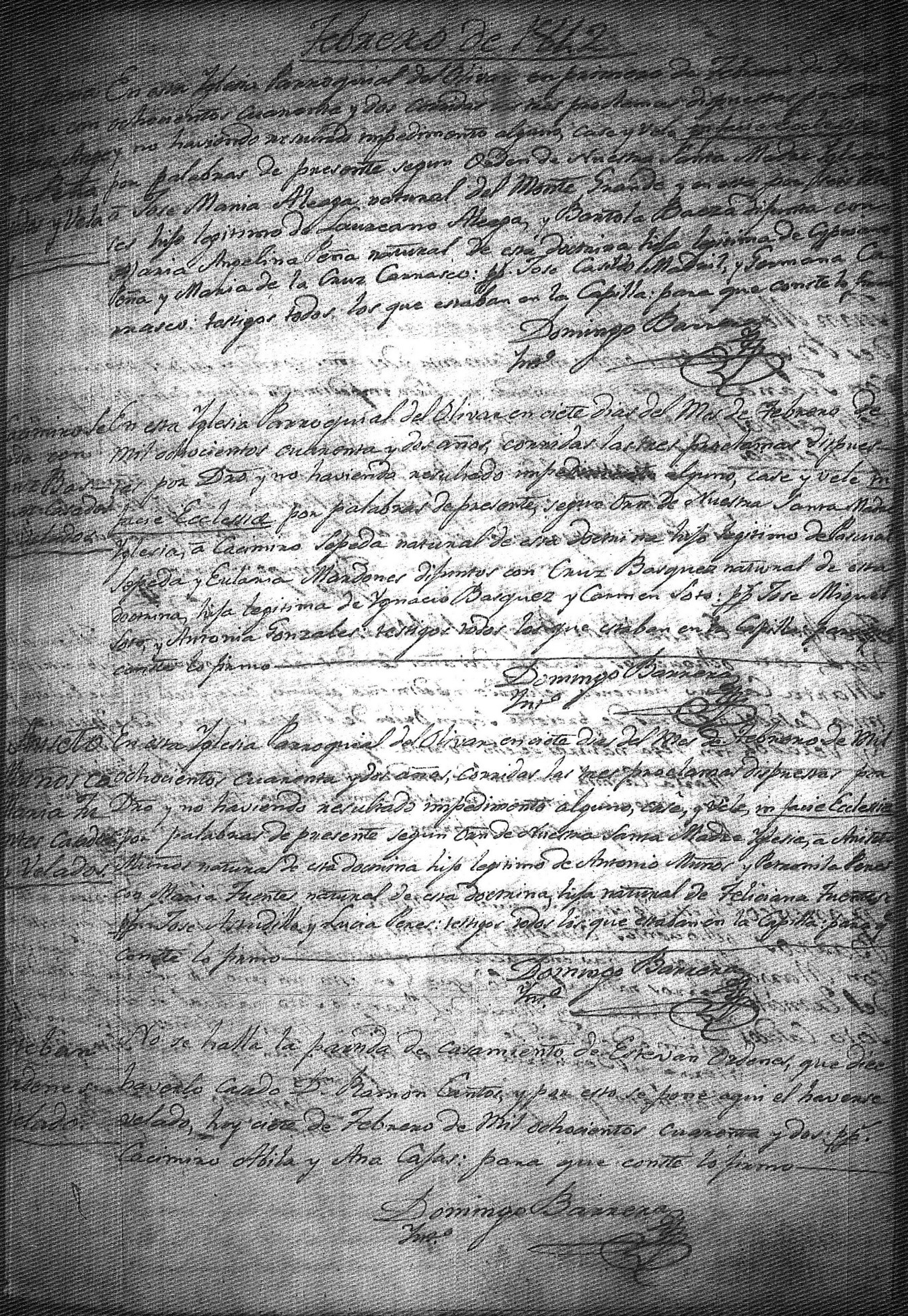 Cannot find the marriage record for Esteban Ordenes, who says was wed by Mr. Ramon Cantor, and because of this, I record here that he was wed, today, the Seventh of February of Eighteen Forty Two. Witnessed by Casimiro Abila and Ana Cajas: and to affirm I sign – Domingo Barrera

I pondered this and knew there was more information at this site that needed to be dug up. I knew one important detail not noted in the record found, and that was the name of the mother. I dug deep and found Maria Gavina Ordenes Gelvez’ exact birth date and calculated the marriage year to be right before her birth. I then started looking through all the marriages one by one for the time period Esteban could have been married. Finally, after a long search, there was a break through! I only searched for the surnames of the brides and found another marriage record. By only looking at the brides’ names, I found a Maria Gelvez. She married a man by the name of Esteban Cordoba in 1838. After verifying our information, the lost marriage record was found! The priest had transcribed the wrong surname for the father, Esteban Ordenes, and logged it under Esteban Cordoba. After verifying the marriage and information, I concluded that this was the marriage record that was lost. 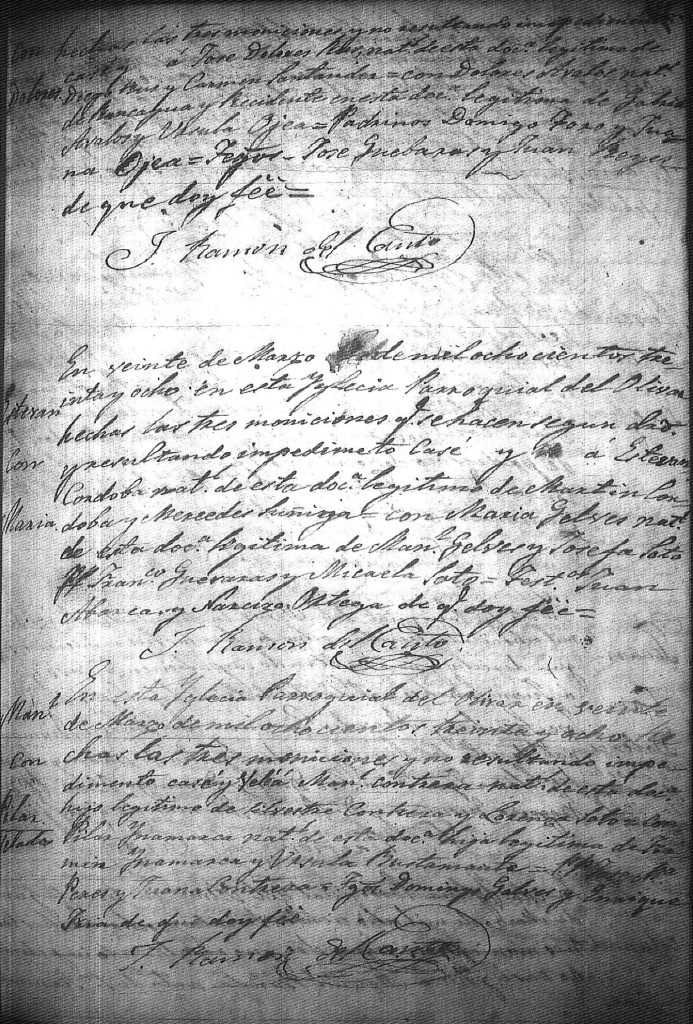 On the Twentieth of March of Eighteen Thirty Eight in this Parish Church of Olivar administering the Three Proclamations according to God. Resulting impediments I married and Veiled Estevan Cordoba [Esteban Ordenes] native of this doctrine legitimate son of Martin Cordoba and Mercedes Suñiga = with Maria Gelvez native of this doctrine legitimate daughter of Manuel Gelvez and Josefa Soto. God Parents Francisco Guevara and Micaela Soto = Witnesses Juan Abarca and Narciza Ortega of which I give faith. = J. Ramon del Canto 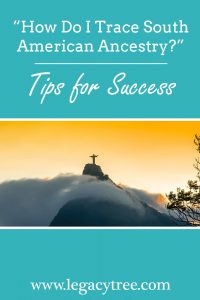 Two important factors led to this discovery. Knowing that Maria Gavina’s surname had both parents’ surnames, enabled me to locate the marriage by the mother’s surname, and the knowledge of what types of mistakes were common during this era helped me know that I should look at all options instead of just those listed as Ordenes.

Family history research can and will be difficult at times. Each region, country and culture will have its issues, but if a researcher takes the time to do some homework on the area he/she is going to be working in to understand historical context, and spends enough time digging through records, it can be possible to learn more about family lines and extend your ancestry.

If you have South American ancestry and need help locating records to extend your lines, our professional genealogists and onsite agents are happy to help! Contact us today to discuss your goals.

Previous article: Unlocking the Genealogical Treasure of the Parish Chest
Next article: How Long Does It Take to Build a Family Tree?