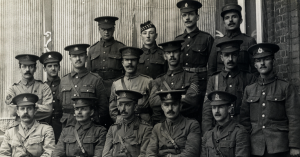 Did your ancestor serve during the Great Patriotic War of 1941–45? Learn more about their Soviet military service using this free resource!Many descendants of Eastern European immigrants who landed on North American shores in the first wave of immigration soon found that their relatives who stayed behind were no longer citizens of the historical empires who had ruled over them. With the changing borders through the Interwar period to the beginning of World War II, the citizens of the new … END_OF_DOCUMENT_TOKEN_TO_BE_REPLACED