A new development in German census records may make tracing your immigrant German ancestors more feasible than ever before!

For genealogists tracing families in the United States, federal census records are one of the first sources searched for information – and for good reason. All of the enumerations from 1850 onward listed every member of the household by name. As time went on, the censuses became much more detailed and, depending on the year, included information such as the month and year of each person’s birth, their marital status, country or state of origin of the individual as well as their parents, occupation, education, military veteran status, and more.

This can be extremely useful if, for example, you know that your ancestor died in one state but was born in an unknown town in another. Sometimes, a quick search of previous census records can reveal your ancestor and his family living in the other state and answer your question right away. Of course it is not always that straightforward, but the possibility is there.

If you have immigrant ancestors from Germany, on the other hand, who are listed on the U.S. census records as being simply from “Germany,” or sometimes (if you’re lucky) from more specific regions, much work still needs to be accomplished before you can begin searching German records for your ancestor. Without the name of a German town, your research cannot “cross the pond.”

Unlike the strategy for American research, which now typically begins with the search of indexed and digitized versions of federal census records, German research rests mainly on the use of church and civil registration records. One reason for this is because of a long-held belief amongst genealogists and archivists that, other than the Mecklenburg censuses, no other German censuses exist. This belief recently achieved myth status. (Although the part about the Mecklenburg-Schwerin censuses itself is true – for the years 1819, 1867, 1890, 1900, and 1919, they have been digitized, indexed, and made available through websites such as MyHeritage.com, Ancestry.com, and FamilySearch.org.)[1]

A book is now available which will specify where the census records for each area of Germany are housed and which years are available. The book includes historical background concerning the various censuses. This effort was spearheaded by Dr. Roger Minert, who teaches various courses concerning German paleography and genealogy research methods at Brigham Young University. The book, German Census Records, 1816-1916: The When, Where, And How Of A Valuable Genealogical Resource, was published in June 2016.

Although census records have recently been found to exist for many areas within the borders of the former German Empire, they vary widely in content, and are not as all-encompassing or consistent as the American federal censuses which have occurred every 10 years since 1790. In a way, they are similar to American state censuses, which were taken more sporadically.

Despite the exciting news about this important publication, a caveat should still be kept in mind: aside from the censuses for Mecklenburg-Schwerin mentioned earlier, the majority of the surviving enumerations for other areas remain unindexed and housed in archives all across Germany. Though they hold great potential, the worth of these unindexed and non-digitized census records is undercut in their current condition in their ability to help answer the ever-important question asked by descendants of German immigrants—which town in Germany did my ancestors come from?

Unless you know the exact town, there would be no way to search the census records for the unindexed areas without visiting various archives and conducting countless page-by-page searches of census records for each town in the province from which you believe your ancestor came. As that is not a reasonable use of time, these records would be better used to supplement the information found through church and civil registration records if you have already identified your German hometown.

If you have ancestors from Mecklenburg-Schwerin, take a look at the available census records to see if you can find your ancestors listed. For those who have a hometown but are not from the Mecklenburg area, search Minert’s new book for details concerning census records for your area. 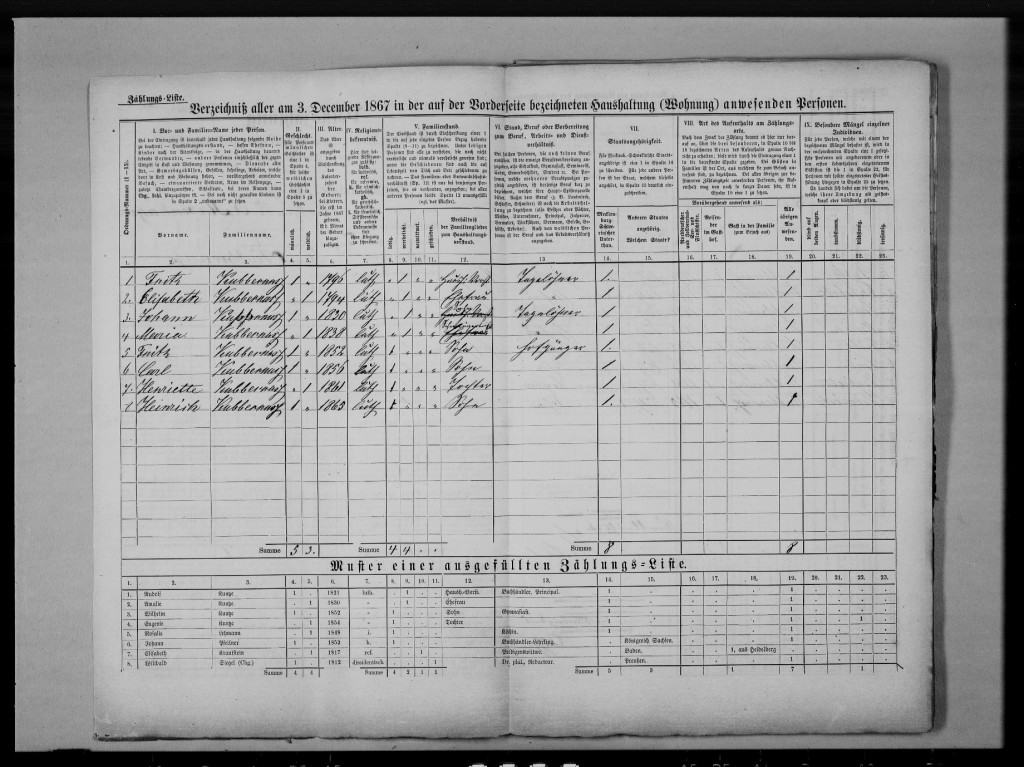 The Fritz Kubbernuss household on the 1867 Mecklenburg-Schwerin census.

Finally, for those who are still lacking the name of a German hometown, don’t despair. A census search may not be available to you now, but perhaps in the future these census records will be digitized and indexed like those for Mecklenburg. In the meantime, there are other records out there which could contain the name of your elusive town!

If you’re anywhere in the process of searching for your German ancestors, allow the experts at Legacy Tree Genealogists to be of assistance. In addition to researchers here in Salt Lake City, we have fantastic onsite agents in Europe, ready to visit that archive or church for you. Contact us today for a free consultation.