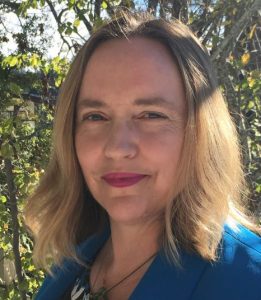 Maggie Stevenson was born and raised on the east coast of Scotland, in the historic Kingdom of Fife. She studied English Language and Literature at the University of St Andrews in Scotland. After graduating she qualified in TEFL – Teaching English as a Foreign Language – and spent three years living and working in the south of Italy.

After several years in Italy she returned to the UK and worked for a non-profit organization supporting homeless individuals. She worked as an assistant to the fundraising team, communicating with donors and organizing fundraising initiatives as well as managing the publication of fundraising campaigns.

In 2002 she relocated from London to San Francisco with her husband and young son, primarily for her husband’s work. In 2005 (now with 2 small sons) they moved from the west coast to the east coast and lived in Manhattan for 8 years. They also spent many happy weekends in Woodstock, New York.

In 2013 she returned to the west coast and San Francisco once more. Maggie started an extensive family history/DNA project to identify her husband’s unknown great-grandfather on his paternal line. What started as a hobby soon became a fascination. In 2015 she took the Boston University online course in Genealogical Research. Maggie attended SLIG in 2017 and took the DNA Bootcamp with CeCe Moore (where she met both Paul and Gretchen, genetic researchers for Legacy Tree!) Towards the end of 2017 she was able to gain some traction through DNA on the identity of the unknown great-grandfather. A surprising documentary find from a cousin in New Zealand, as well as a Scottish sheriff court paternity decree and targeted Y-DNA testing led to a solid conclusion as to which one of four brothers had been the man in question. One DNA cousin was even able to provide a photograph of him.

Maggie has worked professionally helping scores of adoptees and others in unknown parentage searches. She has also completed research for clients with family ties to California, New York, Michigan and Ohio, as well as Canada, England, Scotland Wales, Ireland and Italy.

Previous article: Preserving Living Genealogy: How to Conduct a Family History Interview
Next article: Keys to Making Your Unknown Parentage Case a Success