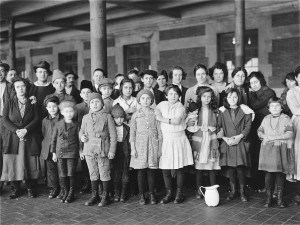 Immigration has once again become a hot topic in the United States lately, but this isn’t the first time. In fact, it has been a common part of the historical and political discourse since the founding of the nation, largely because immigrants make up such an enormous part of our history and heritage as Americans.

Many of the research requests we receive at Legacy Tree involve helping a client identify his or her pre-American origins and immigration story. Some of them are more recent – tracing the whereabouts of an Italian man who arrived in New York, or the life of my own grandmother who came to the U.S. from Germany in the early 1960s. Others take some real digging through multiple generations of American citizens – the longtime Southern families hoping to explore their 18th century Ulster Scots roots, or East Coast families seeking information on where in England their colonial ancestors had lived before coming to the New World.

The earliest settlers in America were more ethnically diverse than is often discussed. Of course, the bulk of the permanent immigrants in the 17th and 18th centuries were from the British Isles – explorers, planters, soldiers, indentured servants, and religious refugees. These settled mostly on the East Coast. Additionally, however, there were the millions of Africans kidnapped and imported by force as slaves throughout the entire western hemisphere.

The Dutch had a sizeable, thriving colony of their own in New York. The largest city in the modern United States was originally a trading post called Nieuw Amsterdam [New Amsterdam], and the Dutch influence can still be seen in the names of many geographic locations within the area (think Harlem, Rensselaer, Bleecker, Stuyvesant, and the Bronx).

The French may not have maintained as large of a presence in terms of permanent settlement, but there were a number of fur trappers living in the then-frontier areas like Illinois, Ohio, and further west into the Rockies. Many of these men intermarried with local indigenous women in the seventeenth and eighteenth centuries. The Acadian French Catholic settlements in southern Louisiana and Maine began in the 1700s when a group of over 10,000 people were forcibly expelled from Canada.

Finally, the Spanish retained communities in the American Southwest (New Mexico, Arizona, Utah, and California, for example), mostly in the form of missions. Later, beginning in the 1830s-1840s, this same region saw settlement by the Basques, a separate ethnic group from Spain who ranched and raised sheep, and were often mistaken for being Spanish or French. There are still large populations of people of Basque descent today living in Idaho, Nevada, and California.

As time wore on in American history, immigration continued, though the different groups often fluctuated. The period of 1830-1850 was especially intense. The Chinese began arriving to the West Coast around the time of the California Gold Rush (1849-1850). The U.S. saw a large influx of Germans during the 1840s as well, thanks to political and military conflicts in their home country. Norwegians also began arriving, and both groups settled predominantly in the Midwest and Plains states, ranging from Indiana and Ohio to Wisconsin, Minnesota, Nebraska, and the Dakotas. The Danish were well-represented, too, a majority migrating as converts to the Latter-day Saint faith, joining other congregants in Utah. Finally, the devastating Great Famine of the 1840s led to a huge diaspora of poverty-stricken Irish. It is estimated that as many as 25% of Ireland’s entire population left the island during that decade.

The latter half of the 19th century and first decades of the 20th brought the Castle Garden and Ellis Island eras. Italians, Eastern Europeans (particularly Jews escaping the pogroms of Russia), and Syrians, as well as even more Germans and Scandinavians came during this period. Today, most immigrants to the United States are of Hispanic and Asian origin, with Mexico, China, India, and the Philippines representing the largest groups.

How do you go about finding record of your own immigrant ancestors and their origins? There are a few rules of thumb to follow!

First, check the simple, non-immigration records. Documents like census enumerations will usually at least list a country of birth for the individual or his/her parents. Sometimes, if you’re lucky, a census taker will have been extra dedicated and included the town or province of your ancestor’s origin as well! If your ancestor was male and born after approximately 1872, be sure to also check World War I draft registration cards, as these usually list the birthplace of the registrant. And of course, you should never leave birth, marriage, and death records out of your search!

Second, check passenger lists and naturalization records. Where possible, check not only the immigration records at the port where the ancestor landed, but also search emigration records created from the country they left. These include passenger lists created in the home country, as well as documents filled out by the emigrants as applications to leave their country. A great resource for this is the Immigrant Ancestors Project, a research project from Brigham Young University which works to extract and publish emigration records exclusively. Sites like MyHeritage.com and Ancestry.com  also have similar collections. Naturalization records were created whenever an immigrant decided to apply for American citizenship. These can contain a wealth of information, including the hometown of the ancestor.

Third, keep an open mind! The ports in New York (particularly Ellis Island and Castle Garden) are the most famous, but millions of immigrants came through less publicized cities. Don’t forget about Philadelphia, Baltimore, Boston, New Orleans, and San Francisco, as well as various cities in Florida and even Mobile, Alabama. The area of the United States in which your ancestor ultimately settled may be a clue as to the port in which he arrived.

Fourth, get creative! There are a number of other record types which may help you find your ancestor’s immigrant origins that don’t seem obvious. For example, local and county histories (many of which can be found digitized for free on Google Books). Check cemetery records, as many immigrants retained ties to their homeland through ethnic and religious organizations relating to a specific European city or region. Often, when an immigrant died, he or she was buried in a plot owned or sponsored by that organization, or buried near fellow countrymen. For example, we did research for a client this year whose Jewish immigrant ancestor was buried in a section of a cemetery owned by a fraternal organization for people from a certain area of what is today Belarus. This was an enormously helpful clue!

Lastly, don’t forget to include us if you’re stumped! Legacy Tree Genealogists has great experience researching and finding immigrant ancestors. We also have numerous onsite agents in hundreds of countries worldwide. Contact us today for a free consultation.

Have any exciting stories about your immigrant ancestor search? Questions? Post them in the comments below or on Facebook!