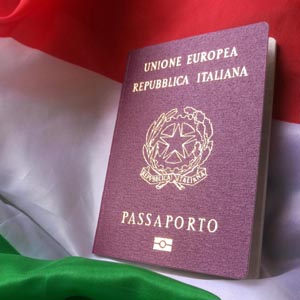 Legacy Tree Genealogists’ Sarah Gutmann was excited to have stumbled upon a record that could potentially change the narrative of her family’s history. In this article, she describes her journey toward dual citizenship to pay homage to her family’s Italian heritage.

For eight decades my grandpa believed his father, Joseph Fraggetta was a first-generation American. Despite this claim, I could not find my great grandfather’s 1906 birth record. One day, about 15 years ago, I was poking around on Ancestry.com, and I stumbled across a 1913 passenger list that perfectly aligned with Joseph Fraggetta’s family of origin. This included a seven-year-old boy named Giuseppe Fraggetta.

With such an uncommon surname and matching demographics, it seemed too coincidental to be pushed aside. As a genealogist, I was excited to have stumbled upon a record that could potentially change the narrative of my family’s history. I expected Grandpa to be just as pleased and intrigued by my discovery.

Unfortunately, he was not.

I was surprised by Grandpa’s mixed emotions. He was shocked to see the names of his father, aunt, and uncles whom he thought were born in America. He was also hurt. He did not know why his father kept this “secret” from him.

Grandpa also felt betrayed, for his name was Joseph just as he thought his father’s name was. In fact, Grandpa had bestowed up his own first-born son the name of Joseph.

Over the next few months, Grandpa and I hypothesized as to why his father claimed to be born in America. Did Giuseppe Fraggetta think it would be easier to assimilate into the American culture if he claimed to be American from the beginning? Perhaps Giuseppe did not want his American-born wife’s family to judge him.

Of course, these questions led to some digging. A trip to the county archives revealed Giuseppe’s naturalization file, and surely enough, the information on record matched that of the passenger ship.

Interestingly, both Giuseppe’s New York marriage and death record listed Italy as his place of birth. However, Grandpa had never seen any of these records.

Next, I set out to obtain Giuseppe’s Italian birth record. This provided to be quite a challenge since the small village of Pontecagnano Faiano does not maintain its own civil records. Eventually, I learned the records were held by the municipality of Montecorvino Pugliano. I then began emailing, mailing, calling, and faxing the civil office until I received a certified copy of Giuseppe’s 1906 birth certificate.

In 2019 I decided I wanted to pay homage to my Italian heritage and become a dual Italian citizen through “jus sanguinis,” or a rule of law that citizenship is determined by his or her parents. I knew I was eligible for citizenship because Giuseppe had naturalized as an American citizen after Grandpa’s birth. I expected my case to be relatively straightforward since I was going through the paternal line. By now, Grandpa had come to terms with his father’s past and was interested in helping me in any way he could to gain citizenship.

I began my quest for dual citizenship by researching the Consolato Generale d’Italia New York’s website to learn about the process, forms, and required documents.

I then made my appointment via [email protected]. In 2019, New York appointments were booked solid for two years. Though long, it was not bad compared to the Consulates in California, which would be an eight-year wait!

It took a few weeks to make an appointment. Because appointments are released at midnight Rome time, I would set a timer every evening and anxiously wait to click on the appointment calendar to see if I could obtain one of the coveted appointments.

I then ordered the required documents. Although I had copies of many already, I reordered most of them to ensure they were in the needed format.

The following certified long-form civil records were required for each of my “direct line” ancestors.  All United States vital records and naturalization records were required to have an Apostille, which is a certificate that authenticates the signature of a public official on a document for use in another country. It was to be translated into Italian, although Google translations are not acceptable.

For me, I needed to submit the following documents to the consulate:

Additionally, I needed to provide a copy (certified was not required) of the vital records of “indirect line” ancestors. These included my great grandma’s birth and death record, my grandma and mother’s birth record, as well as my husband’s birth record.

*Pro tip: When ordering documents, go directly through the village/town the event occurred in. This will often save you money and cut down on wait time.

I am not one who likes to wait around for things. I read on the very helpful Facebook group page, Dual U.S.-Italian Citizenship, to check on [email protected] for any cancellations for appointments.

One night in the early morning hours I went onto the site and found a cancellation appointment, available in two weeks! Fingers shaking with excitement, I entered my information and grabbed the slot, which made my total wait time for an appointment about three months, rather than two years!

The next two weeks were a whirlwind as I felt as though I were on some genealogy race gameshow; gathering last-minute documents (my husband’s birth record and my great grandma’s birth record), having application forms notarized, and having obtained a money order for the equivalency of 300 Euros for the consulate. 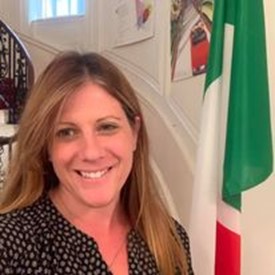 That day in September 2019, I took the train ride to New York City, carrying my documents in protective sheets in a well-organized binder. Because I arrived early (and it was a beautiful day), I chose to walk to the Italian Consulate.

I reflected on the day I discovered 7-year-old Giuseppe Fraggetta on the passenger list. I thought about my family’s journey to this country and their assimilation into a new culture. Just as Giuseppe was proud to become an American citizen, I looked forward to my recognition as an Italian Dual Citizen. Although I never met him, I would like to think my great-grandpa would be pleased with me. By his becoming an American citizen, he provided hope for the future. By becoming an Italian Dual Citizen, I honor his past.

Applying for dual citizenship can be complicated and may require the assistance of an immigration lawyer. One of our partners, Italian Citizenship Assistance, specializes in Italian citizenship law and immigration.

Not every country allows dual citizenship, and the rules vary among those that do. If you don’t know much about your ancestors, the first goal will be to look at your ancestral lines, extend them as needed, and determine if you qualify for dual citizenship based on the requirements of the country you are interested in. If you have questions regarding a specific country, your eligibility, or help documenting your relationship to an ancestor, we would love to assist you. Contact us today to discuss your research goals and get started!

Sarah Gutman started working on genealogy as a hobby at the tender age of 13. She is a member of the Association of Professional Genealogists and earned a MA in English and American History. Sarah specializes in the Mid-Atlantic United States, Europe, Italy, Great Britain, and Germany. She started with Legacy Tree Genealogists in 2021.