We have spent countless hours researching the brave men and women who have fought for this country. One recent case uniquely showcases the strong connection between the public and those who fight for our freedoms—even when there is no familial relationship.

James William DeGraff, a private in the 81st Airborne Anti-Aircraft Battalion, 101st Airborne Division of Alachua, Florida, died on the beaches of Normandy on D-Day. He left no wife or children, but in 2015 he touched the life of a stranger. Don Alfonso was visiting the Normandy American Cemetery in Colleville-sur-Mer, Normandy, France, when his eye was caught by the grave marker of a fellow Floridian, Pvt. James W. DeGraff. Unable to let go of the connection he had made with this fallen soldier, Don hired us to research Pvt. DeGraff’s life and family, his military service, and his ultimate sacrifice on D-Day.

James’ service records were destroyed in the catastrophic fire at the National Archives in St. Louis, Missouri in 1973. Legacy Tree contacted local newspapers, museums, VFW posts, James’ high school, and local libraries. Our team of genealogists worked with the U.S. Army Human Resources Command, Casualty, and Memorial Affairs Operations Division, and the U.S. Army Heritage and Educational Center. By tracing the lives of James’ ten brothers and sisters, we were able to locate a living sibling who could provide a copy of his photograph. After several months a niece born after James’ death contacted us with a photograph of James DeGraff in his military uniform. 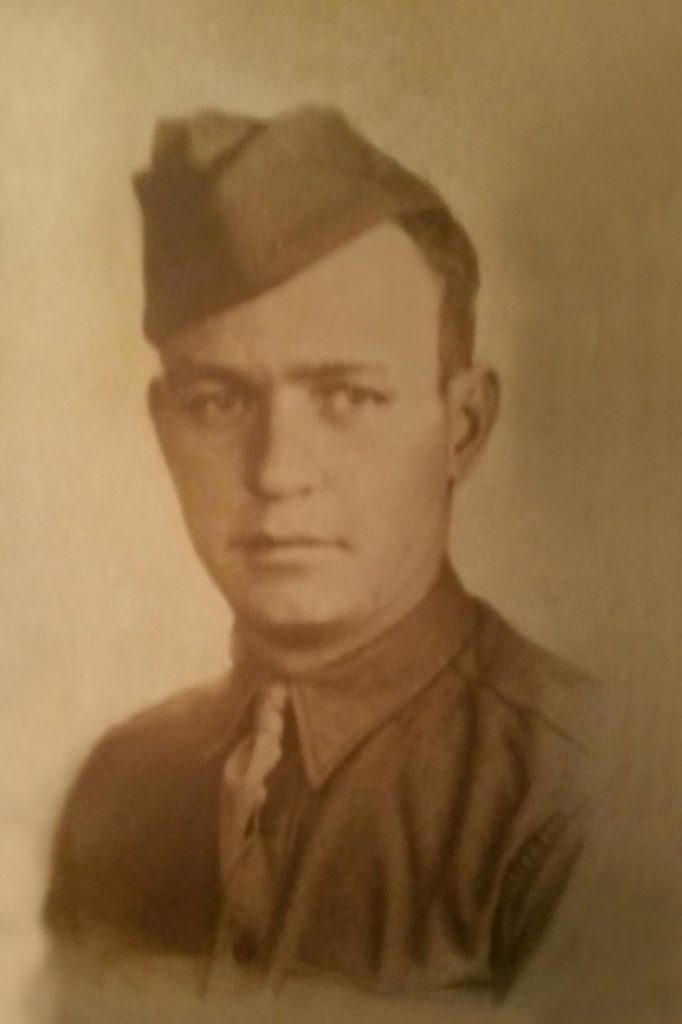 By collecting and analyzing all known documents relating to the life, death, and burial of Private James DeGraff, we uncovered his story. James William DeGraff was born on 10 August 1920 to Louis and Addie Bell DeGraff in Gainesville, Florida. On 2 November 1942 James W. DeGraff enlisted in the U.S. Army at nearby Camp Blanding. By the fall of 1942 the United States was beginning to recover from the Great Depression; however, rural northern Florida, where the DeGraffs lived, continued to suffer economic distress, and a steady job with a reliable income may have appealed to the young man.

James volunteered to join the 401st Glider Infantry, part of the 101st Airborne Division. The Airborne was a brand-new concept and did not have the reputation it carries today. There was a very real chance that the Army would lose every single man assigned to the Airborne. Before deployment, James had his photograph made and sent home to his family—the same photo later sent to a stranger touched through time by the young man’s sacrifice. Later, James was assigned to Battery F of the 81st Anti-Aircraft Battalion, and was assigned to Ft. Bragg, where he began glider training.

Gliders were towed behind a troop transport. Once the gliders were released they were guided by their pilots in a controlled fall to the ground. In the field, James would have been expected to disembark from the glider, gather his gear, and begin the task of destroying any German airplanes flying overhead. The operation was fraught with danger—the glider had no means of protecting itself, and crash landings were not uncommon.

By September 1943, the 81st was fully trained and ready for battle. However, in April 1944, they were retrained for an amphibious landing—an entirely different skill set. Instead of being shot from the sky, the men of Battery F faced the dangers of an ocean crossing.

Battery F landed on Utah Beach with the initial assault waves, set up their anti-aircraft guns, and provided cover for the rest of the troops attempting to land on Utah Beach. There was almost no cover to protect them from the German machine nests and artillery on the cliffs above, and James gave his life protecting his fellow soldiers.

The initial report listed James as missing in action, and James’ father was not notified of his demise until nearly a month after his death. James was buried on 9 June in “Utah Red,” a temporary cemetery. Two weeks later, James was reburied in Ste. Mere-Eglise. Almost exactly five years after his landing, the body of Private James William DeGraff made one final move, to the St. Laurent U.S. Military Cemetery in France, where he rests today.

James has not been forgotten. His name lies on a Veterans Memorial in High Springs, Florida, and now, thanks to the efforts of a complete stranger, his story can be shared with the world. As we approach the 73rd anniversary of James’ death, we will remember both the young man from Florida and the total stranger who felt compelled to learn his story.