The first challenge in beginning Czech research is figuring out that your ancestors actually came from what is now the Czech Republic.

The area now known as the Czech Republic was historically two different lands (Bohemia and Moravia), which later became provinces under the same names as part of the Austro-Hungarian Empire, and then changed hands several more times in the 20th century. So, your ancestor might have been recorded as a citizen of Austria, Austro-Hungary, Czechoslovakia, or even the Soviet Union, depending on the time period, while at the same time considering themselves Bohemian, Moravian, Silesian, Czech, or German.

Historically, the western half of what is now the Czech Republic was the kingdom of Bohemia (Böhmen in German), and the eastern side, bordering Slovakia, was Moravia (Mahren), with a little piece of Silesia (Schlesien). In fact, the terms Bohemia and Moravia are still used today by modern Czechs (Čechy and Morava) and the two regions differ slightly in culture, vocabulary and dialect.

As with other European research, almost all records useful for genealogy were kept at the town or parish level, so you need to know which specific town or village your ancestor came from before beginning research outside of the United States (or any other country to which they immigrated). Some sources that can give a specific village name include any family papers that have been passed down, naturalization records, passport applications, passenger lists, and church records (to name a few). General trends in immigration or surname distribution can also be helpful in narrowing down the region if it proves to be tricky or if it is a common village name.[1]

Czechs that immigrated to the United States came from both Bohemia and Moravia, but they tended to settle in different areas of the country with their neighbors. For example, many of the Czechs that came through the port of Galveston and settled in Texas were from Moravia or Eastern Bohemia, and it was common for a whole village to move together. The farmers that settled in the Midwest, such as Wisconsin and Iowa, tended to be from Bohemia, since it had a very similar climate to their homeland and they could continue practicing the same forms of agriculture to which they had long been accustomed.[2]

Once the hometown has been identified, the next step is to reference it in a gazetteer to determine the local parish and therefore, what church your ancestors would have attended. An excellent gazetteer available online is http://genteam.at/. The entries on GenTeam not only detail which parish the town was part of, but also include information on when church records began, the town’s name in both German and Czech, and a link to the archive website where the records are housed for that specific parish. The best news for researchers is that all of the Czech regional archives are working to digitize their church records, and most parishes are complete!

The majority of the Czech population was historically Catholic because it was the state church under the Austro-Hungarian Empire, but other minority religions kept records too, including the Lutherans, Reformed (Calvinist), and churches unique to Czech history, like the Hussites or the Moravian Brethren. Most church records are held at the regional level, but there are some, like the Jewish records for Bohemia, that are housed in the National Archives (Narodní Archiv) in Prague. (The Jewish records for Moravia are in the regional archives.) Other types of records, such as cadastral maps (government land maps), school records, and censuses are sometimes available through the regional archive websites as well, though some are at the district level and only available onsite. There are seven regional archives as shown in this map, and all have different websites with access to the digitized images: 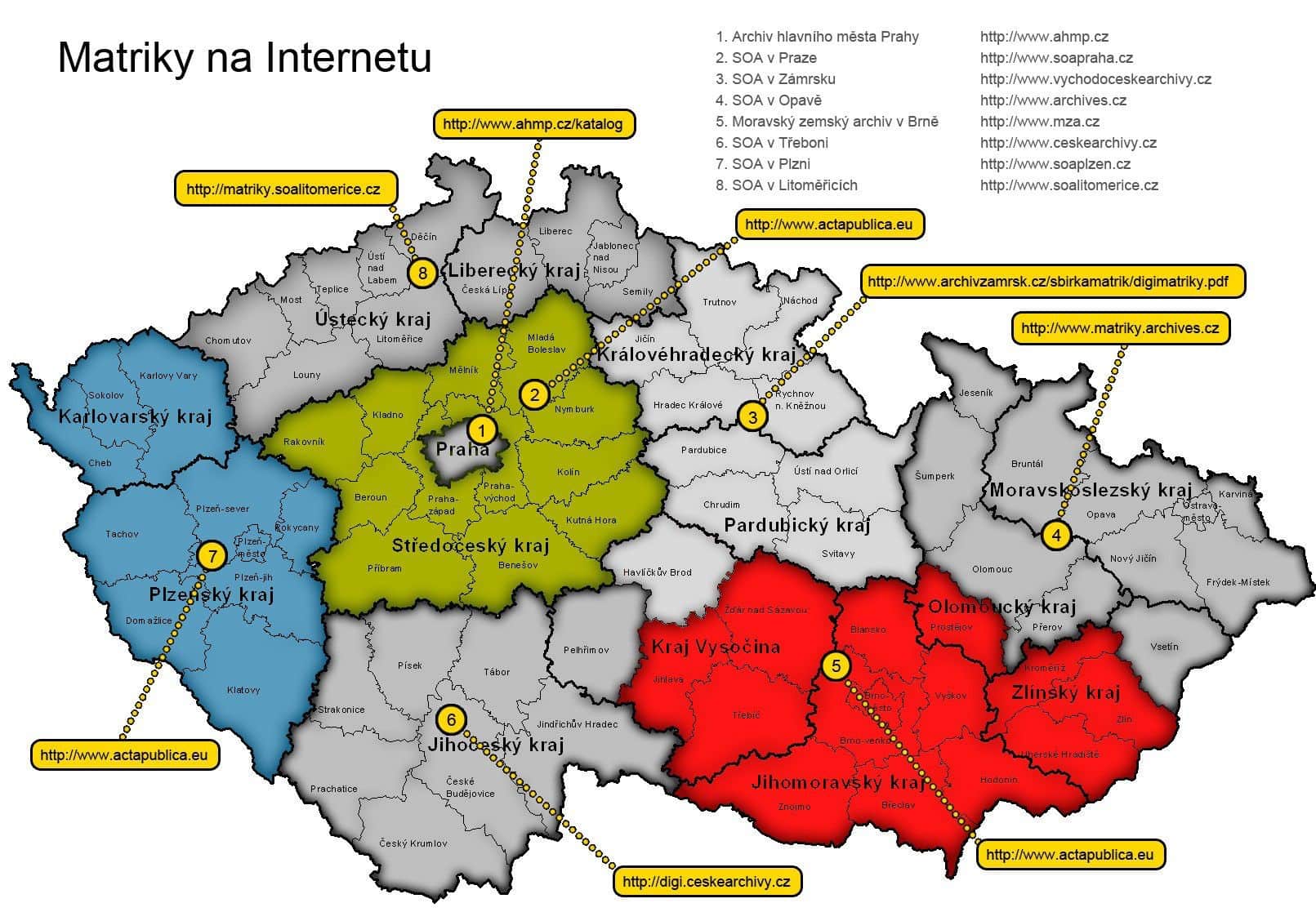 Map showing the seven regional Czech archives. Map courtesy of the Czech Society for Genealogy and Heraldry in Prague, http://genealogie.cz

While some of the regional archive websites are available in German or English in addition to Czech, many others are not. Still, these can often be navigated without too much trouble by using the translate feature on Google Chrome into your native tongue of choice.

Once you have found your family’s parish and located the records on the archive website, the next step is being able to read them! Parish registers were recorded in three different languages, depending on the time period and the individual priest: Latin, German, or Czech. Some excellent resources for interpreting the old handwriting and learning vocabulary in the various languages can be found on the FamilySearch wiki, or Brigham Young University’s Script Tutorials paleography website (for German only at this time). And don’t forget to try Google Translate!

Czech parish registers themselves are a fantastic resource for genealogical information. Unlike some church records, where the christening records give the bare minimum of information, many Czech records give the child’s name, birthdate, christening date, parents’ and grandparents’ names (including maiden names of the women), fathers’ and grandfathers’ occupations, and the house number and village where each member of the family lived. House numbers are particularly helpful in Czech research to differentiate between families because there are often multiple individuals in the parish with the same names.

There are countless other helpful websites for Czech research, like this database of obsolete Czech towns or this Polish name translator that lists given names in several different European languages including English, Czech, Latin and German. Don’t be too intimidated by the language barrier—Czech records are a treasure trove for genealogists and you don’t have to speak the language fluently to learn to read the words “narozeny, oddany, zemřely” (births, marriages, deaths) or 17 května 1887 (17 May 1887).

Do you have Czech ancestry? Would you like help discovering your roots? Contact Legacy Tree Genealogists today for a free consultation.

[1] The website http://kdejsme.cz/ uses census data from the 20th century to modern day to identify percentages of surnames in different regions and can be very useful in narrowing down likely regions.

[2] “Introduction to your Czech Roots,” Amy Wach, J.D., presentation at the National Genealogical Conference 2015, syllabus material in possession of the author.

Previous article: How to Prepare for a Family History Trip
Next article: 9 Tips for Interviewing Relatives