Legacy Tree Genealogists’ Stacy Siirilä Johnson is a second-generation Finnish American and a native of Michigan. She is accredited for research in France, has bachelor’s degrees in history and French, and specializes in Finland, Sweden, Norway, Denmark, and Germany. We asked Stacy about her experiences in Finnish research to learn more about the nuances of researching ancestors from Finland. 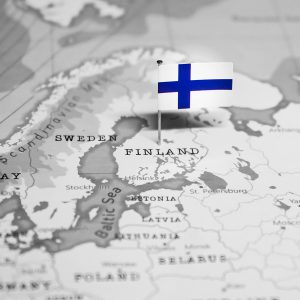 Q: What got you interested in genealogy and your areas of research?

A: Everyone has a story to tell. My mother died when I was 15 years old, and ever since then, I have been interested in the past. History is fascinating to me, plus I just really loved learning about people’s lives.

I started out learning French and went to France when I was in high school. From there, a love for languages and other countries was sparked. I then wanted to learn about my paternal grandparents, who came to the United States from Finland. I also went to Finland and fell in love with the language, its people, and the country.

A: It’s the same in that you’re looking for vital records. And there are different jurisdictions and boundary changes, just like in the United States. It’s always good to study the history of an area that you are researching.

“Actually Finland (or Österland as it was initially called) was part of Swedish kingdom from the middle ages until the Finnish War 1808-1809 that was part of Napoleon’s wars in Europe. After the Peace Treaty of 1810, Finland was an Autonomic Grand Duchy of Russian Empire until 1917 when Finland became independent during the turmoil of WWI and the Russian Revolutions.

The administrative and church language of Finland was Swedish until 1880s. Even names of people were written in Swedish whether they spoke Finnish or not. A hint about the language of an area are the names of farms and cottages. The biggest ones were Gård or Säteri and officers often lived in Boställe. If the rest of the names are mainly Finnish (careful with their odd spellings) then the area was probably Finnish.” Contribution by reader Pekka Neva.

A difference would be the system of patronymics, where the child’s surname comes from the father. For example, Heikki Matinpoika (Matt’s son), Maria Juhontytär (Juho’s daughter). Permanent surnames for Finns were not required until 1920.

A: My grandparents both had the last name of Siirilä. When I was researching my family, I was confused about why they had the same last name before they were married. Because they both lived on a Siirilä farm and a farm can have many families that live there, they sometimes can have the same name.

Both of those names were attached to my grandmother. It was an easy way to track where the people were. And when they came to America, for example, sometimes they took one of those names, whichever one they decided to take.

A: There are vital records such as birth, marriage, and death. They have probate and land records. They also maintained lists of inhabitants of a parish by village, farm, and household. They are sort of like a census where they track individuals as a family unit. The records were created by the Lutheran priest and each parish. Each member was interviewed annually, and community books typically covered a five- to ten-year period.

In addition to those records, they had moving-in and moving-out records so you can follow individuals from one place to another. They are quite easy to access, and most of them are online. The more recent years aren’t as readily available.

Q: Do you speak Finnish or work with Finnish-speaking families?

A: I do speak Finnish. Most of the Finnish projects that I do are from Americans tracing their ancestors back to Finland. None of them speak or read Finnish. A typical Finnish-speaking family, however, can usually speak some English. They learn English in school. It’s just the older generation who have a hard time with English or don’t know English. But you do not necessarily need to know Finnish or Swedish to do your research in Finland.

Q: Where do most of your projects come from?

I quite often find individuals or clients whose ancestors ended up living in Upper Michigan, where I am from, or in towns nearby. So, I end up doing research in my hometown and learning about the different Finnish parishes. That’s quite fun. I learned a little bit more about friends in the Upper Peninsula of Michigan.

Q: Can you talk about immigration from Finland to the United States and how that might impact your research?

A: The largest migration to North America happened during the late 19th and early 20th centuries. Between 1864 and 1914, more than 300,000 Finnish settled in the United States and Canada. The largest wave was reached in 1942 when more than 20,000 emigrated. Immigration continued on a large scale until World War I when the United States government started restricting the admission of immigrants. Immigration then shifted to Canada, mostly in Ontario.

Most of the Finnish immigrants originated mainly from Northwestern Finland, and nearly half of them came from the province of Vasa. The majority were men and unmarried. Many came to North America to work in mines, lumber camps, factories, and railroad construction. The Finnish settlements were concentrated in Minnesota, Michigan and Massachusetts, Oregon, and New York.

There are documents related to their journey to the United States and other countries. We have travel routes as well as specific Finnish steamship companies that individuals traveled on. Passenger lists of Europeans arriving in North America have been made since 1820. There are passport lists and border crossings are also available.

Q: Did Finnish people go to other countries for economic reasons?

A: I think they were poor and wanted a better life and to support their family. For example, the father might have gone to America to work for a little while, and then went back to Finland. He either stayed or brought a wife back. My grandfather came to the United States, bought land, then went back, married my grandmother, and then they came back. On the other hand, my cousin’s father came to the United States and made money working in logging in Upper Michigan and then went back to Finland.

Although some of them came with a priest that had been in Finland. They often followed the priests wherever they went.

Q: What are some challenges with the names of those who migrated from Finland?

A: In Finland, you need the name of the village or parish to find the record of a birth. It helps to have an individual’s name. It’s challenging, especially if an individual changed his or her name when arriving in a new country. Most of the immigrants from Finland already had a family name, and if it was difficult to pronounce, it was changed to better fit the language of the new country.

Sometimes when they migrated, the person who was documenting their information could easily say, “I don’t know what you’re saying, so I’ll just give you this name.” The way to track whether the name is the real name from Finland is that it will show up somewhere as you go back in time.

Some difficulties include shortening a Finnish name, i.e., Peltomäki to Maki or Hautaniemi to Niemi. Similarly, the surname could have been translated from Mäki to Hill. Conversely, it could have changed to sound phonetically similar, i.e., Valtonen to Walton. Others may have chosen a completely new surname to a common name in the new country, like Hietala to Wilson. Even first names were changed to English equivalents like Maria to Mary and Kalle to Carl. Some also chose a completely different name to have a common name. One used his occupation as his name. He was a blacksmith, and he used the name Smith. An individual can also end up with more than one last name. Quite often, they take on a farm name and add it to the one they already have or drop a farm name and take on a new one when they move.

Q: Can you talk about a difficulty you’ve overcome in your research?

A: I had a project where there were ten children in the family and five or six came to the United States. Each one took a different name (not one of them had the same last name). And they did not live in the same general area. Some used farm names, others chose a whole new name.

I overcome challenges by just keeping track of all the names, the locations, the occupations, following all records for the individual as well as siblings and parents, neighbors, and friends. It’s important to track everybody and all of the names. And then eventually it all comes together.

A: Each project undergoes a very strict review process. It’s quite easy to miss details and perhaps even trace the wrong ancestral line when researching on your own. Hiring a professional genealogist saves time and money, and they often have access to collections that an individual does not have access to. Professional genealogists have experience solving difficult genealogical problems, which is a great benefit when you’re doing research.

For most of our researchers, their interest in discovering family histories started with a personal family mystery they wanted to solve. If you have a mystery that you can’t solve, share it with us and we can help you discover your legacy. Contact us for a free estimate on research.

Previous article: Celebrate the Women in Your History
Next article: Technological Advances in Genealogy