Legacy Tree Genealogists employs researchers with a wide range of expertise. We asked our Polish expert, Julie, to share tips for finding Polish ancestors based on decades of experience.

If you’re an American researching your Polish ancestors, you aren’t alone. Polish Americans make up “the largest Slavic ethnic group in the United States, second largest Central and Eastern European group and the eighth largest immigrant group overall.”[1] So how do we begin tracing our roots in Poland? 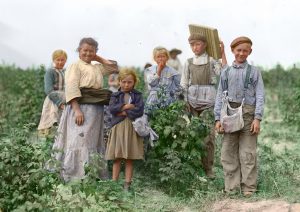 Probably every Polish-American family has heard mention of the “border changes” that were supposedly the reason why Grandpa’s papers say he was from Austria, although everyone knew he was Polish. What many people don’t realize is that Poland did not exist as an independent nation from 1795 until 1918. Historically, Polish lands were partitioned among the Russian, Prussian, and Austrian Empires, and ethnic Poles were citizens of one of those three nations. This is why you might see your Polish ancestors stating Russian birth on the 1910 U.S. census, but Polish birth on the 1920 U.S. census, after Poland was reestablished as an independent nation.

Although we in the U.S. are accustomed to the separation of church and state, this was not the case in many places. In Poland, it was common for priests, ministers, or rabbis to act as civil registrars, blending ecclesiastical and government authority as they recorded births, marriages, and burials. Although this was the protocol in all three partitions for the majority of the 19th century, the exact span of dates in which this was true vary based on the partition in which your ancestors lived, and greatly affects where you should be searching for the records you need. In “Russian Poland,” for example, civil record keeping began in 1808 with Roman Catholic priests acting as civil registrars for people of all faiths (not just Catholics). Beginning in 1826, each faith was allowed to keep its own civil records using a paragraph-style format that remained relatively stable through the 1930s. Civil registration that was independent of any religious organization did not begin until 1945.

The fact that civil copies of church records were made increases the likelihood that records survived for your ancestor’s town. There’s a persistent myth that “all the records were destroyed in the wars,” but that’s simply not true in most instances. Existing records for some locations date back to the 1600s, but in other places surviving records are sparser.

Grandma may have said that her father came from Warsaw, but most of our ancestors came from small villages, not large cities. It’s more likely that her father was using Warsaw as a point of geographic reference to give people a rough idea of where he lived, since others are unlikely to recognize the name of a small village. This means that you most likely won’t find his birth record by looking for it in Warsaw, but it also leaves you in the dark about where to look instead. What kinds of records are most likely to indicate a precise place of birth? Passenger manifests and petitions for naturalization (if dated after 1906) are great sources for this information.

If your Polish ancestors were Catholic, church records from the parish they attended in the U.S. are much more likely to contain specific place of birth than their civil equivalents. These include marriage records for immigrants who married in the U.S.; baptismal records for U.S.-born children of immigrants; and church death/burial records.

If your ancestors were Jewish, check cemetery records for mention of any landsmannschaft to which they might have belonged. Landsmannschaften were fraternal aid societies organized by immigrants from the same town in Europe, and they frequently purchased large burial plots for their members.

Depending on which partition your ancestors came from, some good gazetteers include:

Once you have correctly identified both your ancestor’s place of birth and the location of his place of worship or civil records office, you’re ready to make the jump back to records in Poland.

We at Legacy Tree Genealogists would be honored to assist you with any step along the way in your journey to discover your ancestral origins, including onsite research if needed. Our experts have the linguistic and research skills to efficiently find your family. Contact us today for a free consultation.

Previous article: Why YOU Should Join a Facebook Genealogy Group
Next article: Immigrant Ancestors & “Avalon”: A Movie for Genealogists