The loss of the 1890 census created genealogy brick walls for many family history researchers. We share tips to help you find answers to extend your family history, despite record loss.

100 years ago, the 1890 U.S. Federal Census began its slow journey to almost complete destruction. On 10 January 1921 a fire was reported in the late afternoon at the Commerce Building in Washington D.C. where the population schedules of the 1890 census were stored in the basement. The fire quickly turned from smoldering to raging and in an attempt to salvage the building, gallons of water were poured into the area of the basement where the fire originated. Within the basement was a fire proof vault where many of the Nation’s census records were stored. Unfortunately, the 1890 census records were stacked outside the fire proof vault and according to T.J. Fitzgerald the Chief Clerk of the Census Bureau the census records “were totally destroyed by both fire and water.”[1]. The combination of smoke, fire, and water damage to the 1890 census and other records stored in this area were considered devastating. 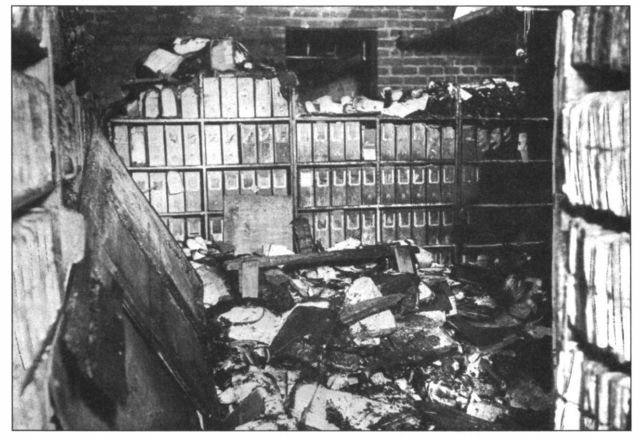 Photograph of the Destruction of the records in the 1921 Commerce Building Fire – Photograph from the Daughters of the American Revolution Magazine, 55, no.3 (March 1921), obtained from JSTOR article titled “The Creation and Destruction of the 1890 U.S. Federal Census. [2]

Varying reports on the extent of the damage to the 1890 population schedules of the census have caused some hearsay about what actually happened to the population census during and after the fire. Most often, you will hear in the genealogical community that the 1890 census was destroyed by fire in 1921 and is not available for genealogical research. However, this narrative is not entirely accurate. The morning after the fire, Samuel L. Rogers, the Census Director at the time, reported that the 1890 census was about “25 percent destroyed with 50 percent of remainder damaged by water, smoke and fire.”[3] He also indicated that salvage work on the 1890 census would be paused until after the insurance companies could assess the damage. It was thought, however, that the water damaged records would be salvageable after painstaking and time consuming efforts.[4] A later report given by G.M. Brumbaugh, editor of the NGS Quarterly and quoted below estimated there were 41,000 enumeration district records surviving from the census.[5] Both reports suggested that a significant amount of the 1890 census remained unscathed or was damaged but salvageable.

Shortly after the fire, there was a movement within the Census Bureau to obtain permission from Congress to get rid of the damaged 1890 census by burning the records. The National Genealogical society was in an uproar and in their April 1921 Quarterly Journal they established resolutions to:

“PROTEST against the proposed official destruction of the Population Records, and especially of the 1890 Population Schedules; and that we urge the Secretary of Commerce and the Congress to carefully preserve about six-sevenths of the approximately 41,200 enumeration district records (volumes) surviving.”[6]

The response to this protest and the protests of other well-known lawyers and historians was a denial by congress that the records would be destroyed.[7]

Prior to the fire there was a movement for the creation of a National Archive and the fire at the Commerce building placed this movement into the forefront of the public consciousness. At the time of the fire, it was thought that upon the creation of the National Archives, the 1890 census population schedules and other damaged records from the Commerce fire would be restored.  However, approval for a National Archive was slow and legislation was not cleared by Congress until 19 June 1934.[8] In the interim, the remaining population schedules were placed in a large warehouse and then sometime after May 1921 were transferred back to the Census Bureau at the request of the new director William Steuart where they stayed until 1934.[9] At this point it is unclear what efforts if any were made to salvage the damaged records or to provide a true assessment of what was or was not damaged and what could be restored. In the article titled “The Creation and Destruction of the 1890 Federal Census” by Robert L. Dorman, an extensive accounting of the events leading to the destruction of the 1890 census are given from the perspective of a trained archivist. In the article the whole situation with the initial storing of the 1890 census outside the fireproof vault, near the boiler room, and then the gross mismanagement of the water soaked records after the fire was characterized as a preventable tragedy.[10] With the records not being immediately treated and restored, the damage did not end with the fire as mold almost certainly ravaged the soaked documents.

Timeline detailing the fate of the 1890 census records

From 1932 to 1934 a series of events unfolded that decided the fate of the surviving 1890 census records.

December 1932: The Chief Clerk of the Census Bureau put together his list of records that were no longer needed for the Bureau to conduct its business and sent it over the Librarian of Congress to look over and determine if any of the records held significant historical value and should be stored permanently. The Librarian did not mark any of the records as having historical value or in short as permanent records. Sadly, included on this list as item number 22 were the original 1890 population schedules.[11]

11 December 1933: a newspaper article in the Washington D.C. Evening Star indicated that the Civil Works Administration (C.W.A.) was proposing a project where employees would create “photostatic reproductions of population schedules of the 1800, 1810, and 1820 and to sort, arrange, classify and index the 1890 population schedules.”[12] The work was to be completed by the end of the C.W.A. program which was scheduled to close in February 1934.

15 January 1934: A newspaper article confirmed that funds were provided by the C.W.A. for the “sorting, arranging, classifying and indexing the 1890 population schedules, which have never been properly set in order.”[13]

Based on these events it appeared that the destruction of the census, technically approved by Congress in February of 1933, was halted and that the 1890 census would finally be reviewed and information salvaged. However, sometime after January 1934 and before the close of the year, the remaining original 1890 census schedules were destroyed by the Department of Commerce. This was confirmed by a note found in a Census Bureau file shown below: 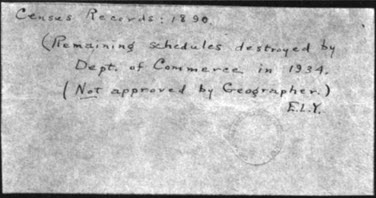 Photograph of Note in Census Bureau File at National Archives, image obtained from JSTOR article titled “The Creation and Destruction of the 1890 U.S. Federal Census.”

31 March 1934: Almost all of the employees for the C.W.A. were let go and by July of 1934 the C.W.A was closed.[15] It is unclear if the C.W.A and the people it employed completed or even started the task of arranging and indexing the 1890 census records before the census schedules were destroyed.

The final burning of the records by the Department of Commerce appeared to be the end of the drawn out demise of the 1890 population schedules. However, in 1942 and again in 1953 remnants of the 1890 census were acquired by the National Archives from the Census Bureau. These schedules include varying enumeration districts from Alabama, District of Columbia, Georgia, Illinois, Minnesota, New Jersey, New York, North Carolina, Ohio, South Dakota, and Texas. A full list of the specific townships and areas covered can be found at the FamilySearch Wiki under the article titled “United States Census 1890”.

This begs the question, are there more population schedules still in existence from the 1890 census? With the mismanagement of the records all those years ago, were other schedules separated from the group that was burned in 1934? It seems unlikely, but at the very least a study of the proceedings of the C.W.A. which are held at the National Archives, could shed some light on whether or not indexing work ever commenced on the 1890 census and where those indexes might be.

Tips for working around the loss of the 1890 Population Schedules

As you can imagine, the loss of the 1890 population schedules has created serious road blocks for many family researchers when trying to locate ancestors who lived between the enumeration of the 1880 and 1900 censuses. Most states and counties did not begin recording births and deaths until after 1900 which leaves few resources to use when trying to piece together families and identify generational linkages. However, all hope is not lost! Below are some tips for breaking through your 1890 census brick walls.

Have you encountered a genealogy “brick wall”? Don’t have the time to dig as deeply as you’d like? Consider hiring Legacy Tree Genealogists. We have the time and resources to most efficiently address your difficult research problems. Contact us today for a free quote. 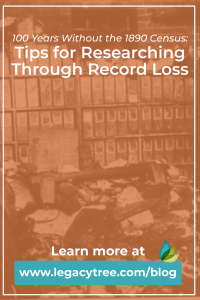