Angel Island and Chinese Immigration to the United States 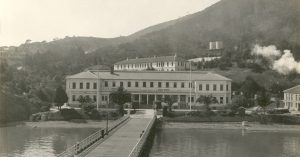 Archaeological evidence indicates that more than a thousand years ago American Indians known as the Coast Miwok used Angel Island as a hunting and fishing site. Europeans first encountered the island in August 1775 when Juan Manuel de Ayala (1745–1797), a Spanish naval officer, was appointed commander of the packet boat San Carlos and ordered to explore what came to be called San Francisco Bay. After cautiously sailing through the strait between the Marin and San Francisco Peninsulas (the Golden Gate) he used the island as a base for surveying the rest of the estuary. Ayala gave the island the name “Isla de Los Angeles” (Angel Island).

From 1910 until 1940 the West Coast’s largest immigrant processing station operated on the north side of Angel Island. Erika Lee and Judy Yung estimate that during this thirty-year period approximately 300,000 immigrants were detained on Angel Island for inspection. The largest number of detainees were Chinese (about 100,000), followed by 85,000 Japanese, 8,000 South Asians, 8,000 Russians and Jews, 1,000 Koreans, 1,000 Filipinos, and 400 Mexicans.[1] It is not possible to get an accurate count of all alien immigrants who spent time on the island, as only 70,052 case files survive. While the bulk of the immigrants processed at Angel Island arrived from China (44,585 of the surviving case files are for Chinese), a surprising variety of immigrants hailing from eighty different countries spent time at the immigrant station.[2]

Angel Island is sometimes referred to as “the Ellis Island of the West,” but this comparison is misleading. The Statue of Liberty and Ellis Island were primarily understood by European immigrants as icons of welcome and acceptance, a notion acknowledged today by Americans in general. This particular sentiment was largely shaped by Emma Lazarus’ famous sonnet which contains the lines, “Give me your tired, your poor, / Your huddled masses yearning to breathe free, / The wretched refuse of your teeming shore. / Send these, the homeless, tempest-tossed to me, / I lift my lamp beside the golden door!”[3] In contrast, Angel Island is remembered as a symbol of suspicion and rejection.[4] The immigration station on Ellis Island operated from 1892 until 1954, and during these sixty-two years, some 12 million immigrants were processed and admitted into the United States. Historians estimate that about 2 percent were rejected.[5] In contrast, immigration scholar Roger Daniels suggests that the rejection rate for Angel Island was about one-in-six — or close to 16.5 percent.[6]

Chinese immigrants—seeking to escape poverty, lack of opportunity, social upheaval, population pressure, violent feuds, and natural disasters in their homeland—began immigrating to California in substantial numbers during the 1850s, shortly after gold was discovered at Sutter’s Mill. By 1870 there were 63,000 Chinese residing in the United States, and 77 percent of those were living in California. The Chinese constituted 9 percent of California’s total population and 25 percent of the entire work force.[7]

Competition with white American workers, a contracting economy, and racial discrimination led to the passing of legislation to restrict Chinese immigration to the U.S. The most influential statute was the Chinese Exclusion Act passed by the 47th Congress on 6 May 1882. This act suspended the entry of Chinese laborers for ten years and prohibited the naturalization of Chinese already living in the country. Only merchants and their families, students and teachers, legitimate travelers, and Chinese-American citizens were eligible for entry into the United States.

In 1892, the Chinese Exclusion Act was renewed for another ten years, and then it was made permanent during the Theodore Roosevelt administration. Only during World War II, when China and the U.S. had become allies in the fight against Japanese aggression, was the law curtailed somewhat, establishing quotas and allowing for naturalization. However, it wasn’t until 1965, when congress passed the Immigration and Nationality Act as part of Lyndon B. Johnson’s civil rights agenda, that Chinese immigration quotas were established on a roughly equal basis with those of other countries.

Besides the discriminatory legislation enacted by congress, Chinese immigration was further complicated by the 1906 San Francisco earthquake and fire which destroyed many vital records. When the immigration processing center on Angel Island was completed in 1910, immigration workers were tasked with determining the accuracy of claims to U.S. citizenship, and with discerning the legitimacy of those professing to be the “son of a merchant.” The result of these developments was that Chinese immigrants were subjected to extremely detailed interrogations lasting far longer than non-Chinese immigrants were obligated to endure.[8] Because Immigration officials estimated that 90 percent of claims to U.S. citizenship or merchant status were fraudulent, the questions posed during these meetings could be very specific.[9] For example, potential immigrants might be asked, “How many rows of houses in your village? What is the name of the nearest market? How often did your “father” return home to visit? Potential immigrants might also be asked to explain in detail the occupations and family makeup of various neighbors or even the size and location of the family’s clock.[10] To prepare for such questioning, immigrants would memorize extensive crib sheets, some a hundred pages long. Such questioning occasionally went on for weeks and even months as immigration officials sought to distinguish legitimate offspring from “paper sons.”

While these bouts of questioning and the intrusive medical examinations that accompanied them were unquestionably miserable for those who endured them, the records generated during the interview process are indispensable sources for compiling family history, especially for the descendants of Chinese immigrants. They can be a treasure trove of information, providing details you would never find in other sources.

The immigration center at Angel Island was closed for good following a fire that broke out on 12 August 1940, which destroyed the administration building and the detention barracks. The cause of the fire was an overloaded circuit. By November 5th the last of the Angel Island detainees were moved to San Francisco for processing.[11]

If you have Chinese ancestry, whether your family still lives in China or they immigrated to the U.S. or another place, our team of professional genealogists can help. We would love to help you find any records that exist about your family in order to learn more about your Chinese heritage. Contact us today to discuss your research goals.

[3] From “The New Colossus,” composed in 1883 to raise money for the pedestal upon which the Statue of Liberty now stands.

[4] See Roger Daniels, “No Lamps Were Lit for Them: Angel Island and the Historiography of Asian American Immigration,” Journal of American Ethnic History 17.1 (1997), 3.

[5] For this rate, see the section titled “Arrival at the Island and Initial Inspection” on the website for the Statue of Liberty—Ellis Island Foundation, Inc. https://www.libertyellisfoundation.org/ellis-island-history (accessed 15 Sept. 2017).

[7] For these figures, see Ronald Takaki, Strangers from a Different Shore (New York: Back Bay Books, Little Brown and Company, 1998), 79.