The Journey of DNA’s Inheritance Paths: X-DNA and Autosomal DNA

The stories in this article demonstrate how X-DNA and autosomal DNA can be used to solve research problems based on DNA inheritance patterns.

*This article originally appeared in NGS Magazine, and is reprinted with permission

The DNA in humans today has taken a far- ranging journey from ancestors of long ago. The stories in this column demonstrate how DNA can be used to solve research problems based on inheritance patterns. Each human has DNA, a biological code that affects many physical, emotional, and behavioral characteristics. Humans inherit copies of DNA from their parents, who in turn inherited portions of DNA from their parents, grandparents, and other ancestors. The journey that DNA takes from ancestor to descendants, from generation to generation over hundreds of years, follows four major inheritance paths. DNA testing and consideration of these patterns enable researchers to uncover information about their biological heritage. Two inheritance paths, X-DNA and autosomal DNA, are discussed in this article; mitochondrial DNA and Y-DNA were described in a previous article, The Journey of DNA’s Inheritance Paths: mtDNA and Y-DNA.

X- DNA is one of the sex chromosomes (the other sex chromosome is the Y-chromosome previously discussed). While a male inherits
an X-chromosome from his mother (which he passes on to his daughters), a female inherits one X-chromosome from her mother and one from her father (and by extension from her father’s mother). When two X chromosomes are present, as is the case in biological females, the two copies align and may exchange genetic material in a process called recombination before being passed on to the next generation of descendants. As a result, the X-DNA that an individual inherits from the mother could come entirely from the maternal grandfather or entirely from the maternal grandmother, or it may be a mixture of the X-DNA carried by the maternal grandfather and the maternal grandmother.
When two individuals share large segments of X-DNA, they share a recent common ancestor at a specific location in their respective family trees. The basic rule of X-DNA inheritance is that it cannot be passed through two successive generations of males. Just because it is possible to inherit X-DNA from a particular ancestor does not necessarily mean that an individual does inherit X-DNA from that person. X-DNA is tested by all companies, but not analyzed by all companies. Due to X-DNA’s unique inheritance pattern, sometimes it can be used to narrow the possible nature of a relationship between two autosomal DNA matches. 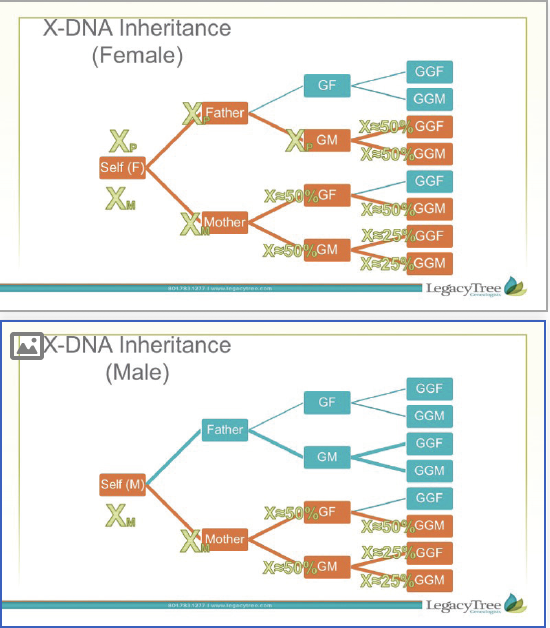 X-DNA can only be inherited from a subset of particular ancestors. It cannot pass through two successive generations of males. Provided by Legacy Tree Genealogists.

The mystery of Johanna’s father

Born in New York City in 1946, Johanna is the daughter of Ethel X-Grussmeyer, an actress and a native of Alsace-Lorraine, France.* Growing up, Johanna knew nothing about her father. Every time she asked Ethel about him, Ethel would tighten her lips and refuse further discussion. Eventually, Johanna decided it was best not to ask. Though Johanna had no knowledge of her father’s identity, origins, characteristics, or family, the 50 percent of her DNA she had inherited from him eventually provided clues to uncover his identity. When Ethel died, Johanna despaired at the thought that she might never learn about her paternal origins, but then she took a DNA test. Her DNA, particularly her X-DNA, connected her to the traces of a parallel genetic journey in her father’s family. Part of the DNA Johanna inherited from her father was an X-chromosome which he, in turn, inherited from his mother, Johanna’s paternal grandmother.

Gustav Algot Fredriksen was born in Copenhagen, Denmark, in 1877, the oldest son of Fredrik Daniel Olsen and Maria Jensen. As part of his genetic inheritance, Gustav inherited an X chromosome from his mother—an inheritance which he shared in part with his six younger siblings. Gustav eventually married Julia, the only daughter of a Swedish couple, and passed on his X-DNA genetic legacy to his only child, Charlotte. In turn, Charlotte passed on parts of Gustav’s X-DNA to her son, Christen, and her daughter, Sofia. In 2017, autosomal DNA testing for Christen and Sofia revealed that they shared large amounts of DNA and large segments of X-DNA with an unknown relative: Johanna Grussmeyer.

Johanna has few other genetic cousins, and none as close as Christen and Sofia, but the shared X-DNA between all three individuals aided in solving the mystery of Johanna’s father. The amount of DNA that Johanna shares with Christen and Sofia suggests they are likely related as second cousins. In other words, they probably share common great-grandparents. Since both Christen and Sophia share X-DNA with Johanna, their shared ancestry has to be through their mother, Charlotte. Because Charlotte had no ancestry from Alsace-Lorraine, their relationship has to be through Johanna’s paternal family, more specifically through her paternal grandmother.

Finally, since Charlotte had only paternal aunts and no maternal aunts, it was clear that a sister of Gustav was the paternal grandmother of Johanna. Gustav had three sisters. One died in infancy. Another had no children. The third had one son named Wilhelm Thorsen, a professional actor who traveled to New York in the spring of 1945. He carried with him X-DNA from his mother, an inheritance he shared with his uncle Gustav and his first cousin Charlotte, and which he passed on to his biological daughter, Johanna. Targeted testing of Wilhelm’s only living son confirmed that Johanna Grussmeyer is the biological daughter of Wilhelm Thorsen. 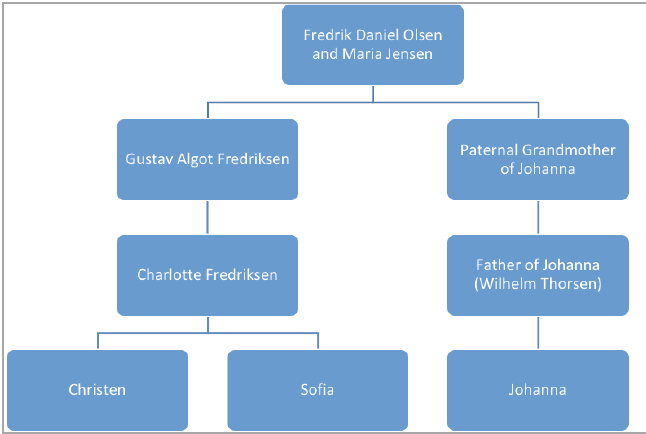 The concepts for incorporating X-DNA evidence shown in this story include: 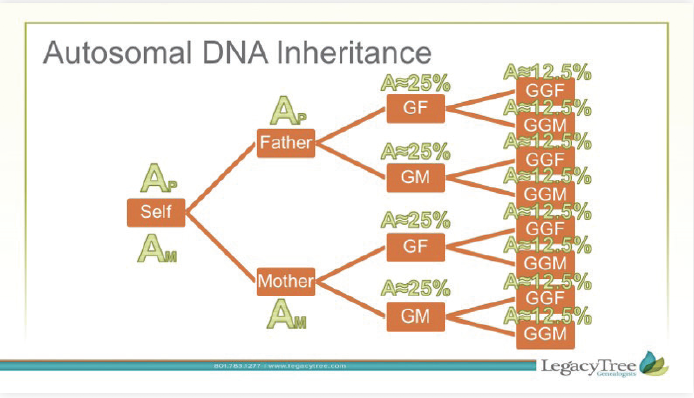 Autosomal DNA is inherited from many ancestors across many ancestral lines. Individuals inherit 50 percent from each parent, and approximately half again from individuals in each
preceding generation. Provided by Legacy Tree Genealogists.

While each person inherits exactly half of autosomal DNA from the mother and half from the father, due to recombination the percentages of inherited DNA from more distant generations are approximate: about 25 percent from a grandparent, about 12 percent from a great-grandparent, and about half again from every previous generation of ancestors. Most individuals inherit at least some autosomal DNA from each of their third-great-grandparents. Nevertheless, as researchers trace their family trees further back in time, eventually they will identify ancestors from whom they inherited no autosomal DNA at all. This lack of inherited DNA from more distant ancestors typically begins to occur in the range of fourth- and fifth-great-grandparents.

When two individuals share autosomal DNA, they often share a recent common ancestor or ancestors. Depending on the amount of shared DNA, the position of that DNA on individual chromosomes, and the total number of segments shared, it is possible to estimate the approximate level of a relationship. Additional exploration of genetic cousins shared between two individuals and documentary evidence can help topple genealogy brick walls.

Finding a family for Cora

Cora Sterling was only enumerated in a single surviving federal census. According to the 1900 census of New Orleans, Louisiana, she was born in August 1882 in Mississippi, to a father born in Georgia and a mother who was a native of Mississippi. While Cora may have been enumerated with her parents in the 1890 census, that enumeration was mostly destroyed in a 1921 fire.

Cora’s 1900 census enumeration also reported that sometime in 1899 she had married Vernon Sterling. Despite her recent marriage, no candidates were found in the surrounding households, city, county, or surrounding counties who might be her parents. By 1910, Cora was deceased. Both of the death records of her children reported that her maiden name was Baker—a clue regarding her origins. Although Cora was never mentioned in any document with her parents, she carried a biological record of their identities in her autosomal DNA. 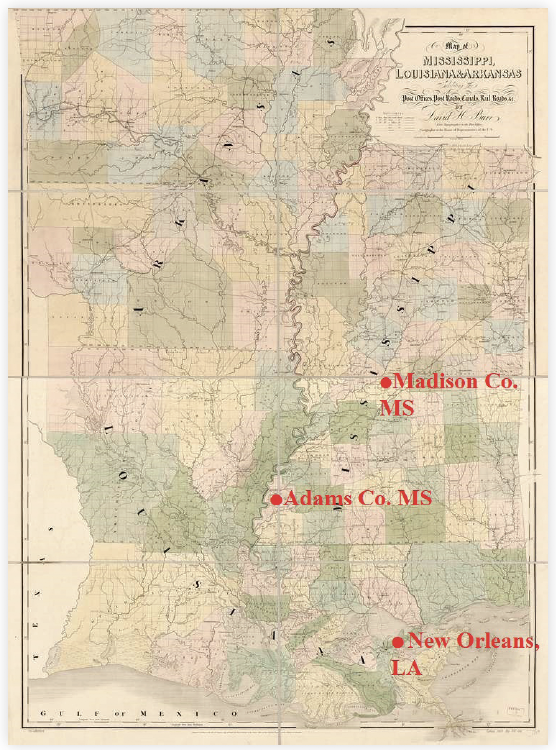 David H. Burr, “Map of Mississippi, Louisiana & Arkansas exhibiting the post offices, post roads, canals, rail roads, &c.,” The American Atlas (London, J. Arrowsmith, 1839). Library of Congress (https://www.loc.gov/item/98688404). Cora Baker Sterling appears to have migrated south from her origins in Madison County, Mississippi, down the Big Black River and the Mississippi River and eventually to Adams County, where her father is reported to have died in 1891 and her sister, Lillie, was married in 1893. Finally Lillie and Cora settled with their families in New Orleans further down the Mississippi.

Enumerated in the same 1900 household as Vernon and Cora was another couple: George and Lillie Brewer. Lillie was born in Mississippi in March 1871 and also reported that her father and mother were natives of Georgia and Mississippi, respectively. An 1893 marriage record stated that George Brewer married Lillie Baker in Adams County, Mississippi, but even the indirect route of assuming a close connection between Lillie and Cora failed to identify parental candidates for Lillie and, by extension, possibly Cora. By 1910, both Cora and Lillie had died, and it seems no vital records were created to document their deaths. Nevertheless, before her death, Cora passed on 50 percent of her autosomal DNA to her two children, a biological legacy that would eventually help identify her parents and siblings.

In 2018, autosomal testing for Cora’s grandson and great-granddaughter showed that they share significant portions of their autosomal DNA with a tested descendant of Lillie Baker Brewer, confirming that Lillie and Cora were indeed siblings. These three individuals all share DNA with many descendants of a Baker family from Madison County, Mississippi.

George Baker and his wife Eliza were enumerated in the 1880 census in Madison County, Mississippi, with nine children, including a daughter named Lillian born about 1871— the same person who would later be known as Lillie Baker Brewer. Descendants of Lillie Baker Brewer and Cora Baker Sterling share significant amounts of DNA with fourteen descendants of five of the other children of George and Eliza, as heirs of this couple’s autosomal DNA legacy. They also share DNA with collateral relatives of both George and Eliza.

Cora was never mentioned in any record with her parents. No church record, will, census record, or other record names her with her family. Yet the genetic record of her autosomal DNA passed on in part to her descendants and similarly passed down through the families of her siblings, aunts, and uncles confirms what no record states outright.

The concepts for incorporating autosomal DNA evidence shown in this story include:

Consideration of the historic journey that Y-DNA, mitochondrial DNA, X-DNA, and autosomal DNA follows from ancestors through multiple generations to the present day can offer insights into the meaning of DNA shared with other testers and aid in solving genealogical mysteries. The universal, uniform, independent, and mutual nature of genetic inheritance makes these genetic journeys useful for tracing corresponding genealogical journeys.

* Note that while both scenarios in this article are based in real experiences, the names, locations, and details have been changed to protect the identities of living individuals. 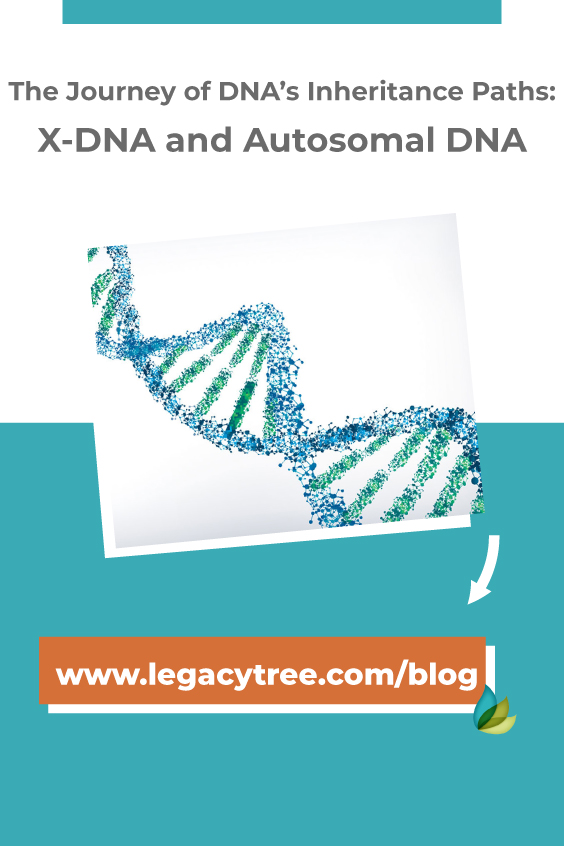