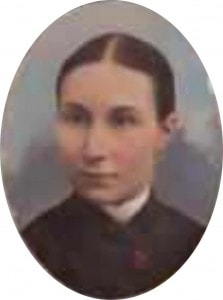 When conducting genealogical research, it is vital – and also extremely fun – to collect as many records as possible regarding the research subject in order to gain a fuller picture of the life of that individual. This applies to all types of records, such as birth and death certificates, censuses, obituaries, church records, and ship manifests, to name a few.

In today’s digital world, information is often accessed through search engines that scan indexes. These indexes are created when someone reads an original record and extracts the pertinent information. You don’t get to see the image itself, but you essentially get a summary of what it says. Many records on sites like MyHeritage, Ancestry, and FamilySearch fall into this category. An important thing to remember is that when an indexed record is found, the index only provides a few extracted elements of that record – just enough to make the record searchable. It is very seldom that every detail was extracted from the record. While the indexed record often provides pertinent information that can move the research forward, the idea is to go one step further and access an image of the original record in order to glean from that record every possible kernel of information.

Case in point: I researched the life of Martha Harris who was born in 1799 in Coventry, England. First I utilized search engines that could scan through millions of indexes and pinpoint records possibly relating to Martha; then, I acquired the corresponding original records where possible.

Martha was married at age 20 to Benjamin Smart, and together they went on to have nine children. I discovered that the year 1836 was extraordinarily difficult for Martha. That May, her husband of seventeen years died, leaving her to care for their four surviving children. An index led me to this image of his original burial record, which told me that Benjamin was age 40 when he was buried, and he had resided at Swanswell in Coventry:

Twelve weeks later, their ninth child, Emma, was christened, implying that Martha had been pregnant when she buried her husband. According to this image of Emma’s original christening record, the family had moved to Gosford Street, and her father had been a weaver. These details were not found in the online index – only in the original record:

Six days after Emma’s christening, postpartum and still mourning the loss of her husband, Martha returned to the cemetery to bury her two-year-old daughter Harriett.  Death, birth, death – all within three months.

I learned that Martha quickly remarried, something any woman with four children to care for in pre-industrial England would have done for protection and security. According to this image of the original marriage record, on 11 February 1837 she married a widower, John Hewitt. I noted that one of the witnesses was David Harris, who bore the same surname as Martha’s maiden name. Once again, the name of the witness had not been transcribed in the index. This took going the extra mile: 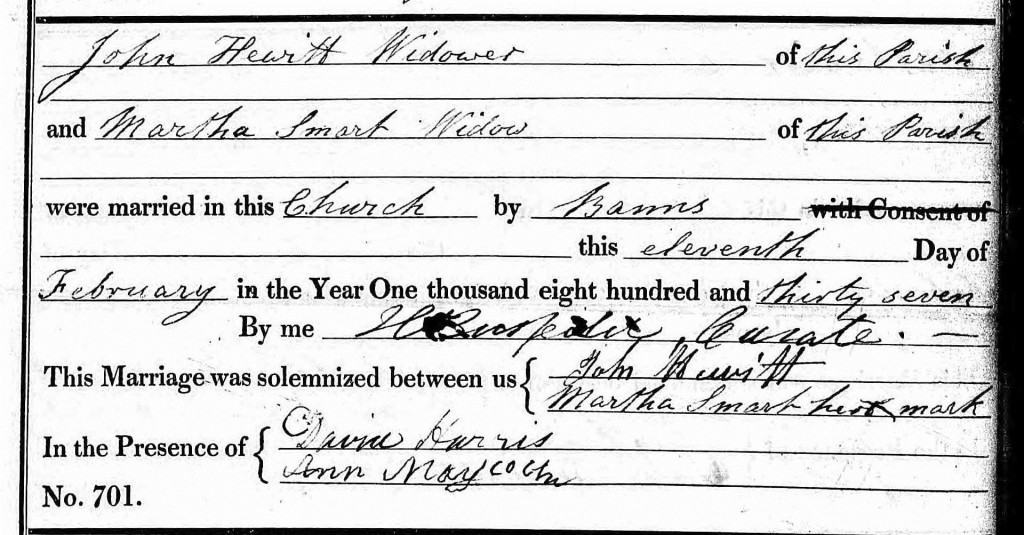 Martha was then found on the 1851 U.K. Census, living in Coventry with her husband John and son Samuel from her previous marriage. Martha worked as a silk winder while her husband was employed as a laborer:

I also learned that her daughter, Mary Ann Barker, sailed for America on the S.S. Camillus in 1853 with her husband and toddler, and that Martha never saw that daughter again. 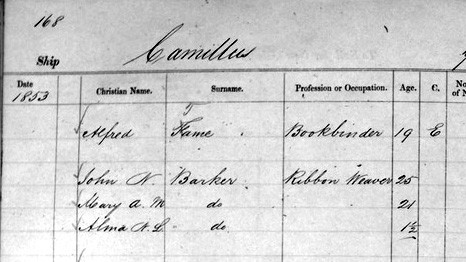 The final record gathered regarding Martha related to her burial. Searching a civil registration index, I located an indexed record for someone that fit Martha’s description: a Martha Hewitt, age 70, who died in the March quarter of 1870 in Coventry:

I could have stopped there, and just assumed that this probably was her. I could have been content with a month and year of death and an estimated birth. Instead, I went the next step and ordered this record from the General Register Office. What I learned from this original record made the cost and effort completely worth it.

Discovering the Gold in Original Records

When the death registration arrived, I examined every piece of information on this record to determine if this was indeed the ancestral Martha, using information not included in the index. I determined that this was indeed Martha because she was the widow of John Hewitt, a pensioner who had lived at 23 Foot. Her son, Benjamin Smart, was the informant. She had died of senectus, a Latin term for old age. Of particular interest was the second box, the one which indicated that she died on 3 January 1870. Marked just below her death date was her death place: the workhouse located on Brick Kiln Lane.

Workhouses were England’s system of handling the poor, and author Charles Dickens wrote entire novels about the dismal lives of those who lived inside. After bearing nine children, burying two husbands, and working as a silk ribbon winder, Martha ended up living her final years in one such institution. An image of the very same Brick Kiln workhouse was located, courtesy of workhouses.org.uk: 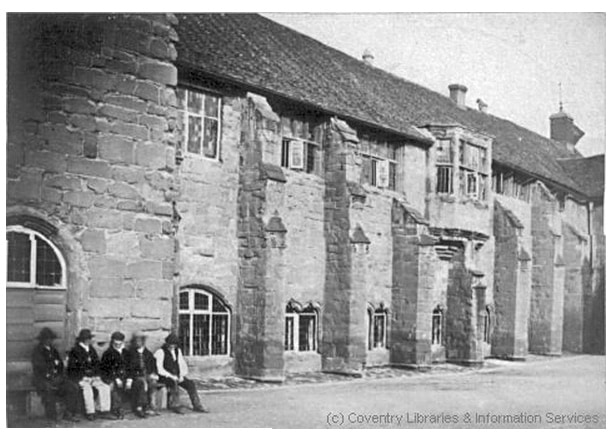 I wished a box had been available on the death record to indicate why Martha had not resided with her son Benjamin, or had not joined her daughter overseas in America.

Either way, I would not have known this and all the other fascinating pieces of information about Martha had I not moved past the indexed records and obtained images of the originals – whether they were a census report, a ship manifest, church records or civil registration. There truly is gold in original records!

How does one access these originals? Well, therein lies the reason so many genealogists are content with the limited indexes. Obtaining records like birth and death certificates, military files, notarial records, deeds, and court documents can be a lengthy and often expensive process. Many, many records are located on microfilm at the Family History Library in Salt Lake City (or on microfilms which can be ordered to satellite FamilySearch centers around the world). These are free to access at the library itself, but most genealogists do not live in Utah. Thus, this requires ordering the microfilms for a fee to their local center, or hiring a local Utahn to perform the look-up for them.

Vital records, like many highlighted here, can be ordered from government offices, and fees usually range anywhere from $10-$30 apiece, after you’ve determined where they are held and what documentation is required to obtain them. Military records, such as American Civil War pension files and bounty land warrant applications must be obtained directly from the National Archives, and cost from $30-$80, with a wait time of up to three months. Other documents are held by smaller entities such as local genealogical societies, museums, churches, public libraries, and archives.

Many wonder about the reasons for these hurdles and expenses. A simple answer is that the process of digitizing and storing millions of records on servers is expensive in and of itself. There is a frankly impossible amount of historic information out there, and it takes enormous amounts of both time and money to obtain, scan, upload, index, and maintain it all. For example, researchers at the University of California-Berkeley estimated several years ago that it would take 400 years just to catalog the 3.5 million images housed by the American Library of Congress.[1] And that is only a part of the process and a portion of their overall collections. Many archives and churches simply have very limited funding, and rely on patron purchases in order to survive. Many of the largest genealogical websites actually contract with such archives and governmental offices, agreeing not to publish images so that their livelihood is preserved. This, in turn, contributes to the overall cost of the genealogical industry.

Despite the difficulties and expenses, however, obtaining these documents is almost always well worth the price paid, and is often absolutely necessary in order to break down brick walls.

Legacy Tree Genealogists has access to the largest genealogical library in the world and its millions of rolls of microfilm so you don’t have to do the work yourself. We are also skilled at knowing the most efficient and cost-effective ways of obtaining original records so that our clients get the fullest possible insight into the lives of their ancestors. Contact us today for a free quote and to let us know what our experts can do for you.