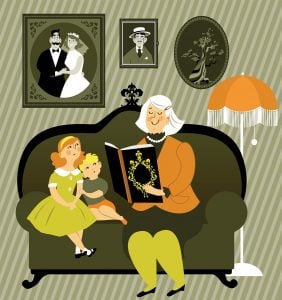 Genealogy begins as an interest, becomes a hobby, sometimes continues as a vocation, takes over as an obsession, and finally becomes an incurable disease. I have seen this in my own life and now in the lives of my children and grandchildren.

My grandmother Zola was not the quintessential grandmother who pulled hot chocolate chip cookies out of the oven when her grandchildren visited. My grandmother pulled out her stories. Many of the stories she told us were from the lives of our ancestors. She had a way of bringing magic into their ordinary lives and making each one a hero, instilling a sense of belonging and pride in each of her grandchildren. 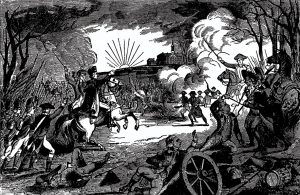 She told us about our fifth great-grandfather John who, when he was 14 years old, snuck away from his chores on the family farm to hide under a bridge and watch a battle during the Revolutionary War. Only as the shots rang out did he realize he had placed himself in grave danger.

She told stories of our third great-grandmother, Mabel Ann Morse, who was known for her quick wit and sense of humor.

She represented her city at the Women’s Suffrage Convention in Chicago. One irate gentleman declared that women had no business in public affairs and should be home sewing buttons on shirts and darning socks. To everyone’s delight and his chagrin, my grandmother arose with dignity and informed him that he would be pleased to know the buttons were all on and the socks were all darned before she left home, and she wanted the right to vote. She changed the world for her posterity. I wanted to do the same. 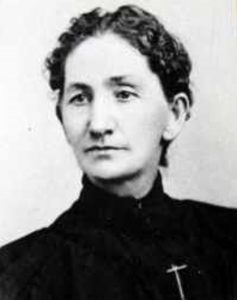 My grandmother Zola told us about the struggles of getting married during the Great Depression. How She and Grandpa were so poor, she would spread lard on white bread to make a sandwich for her new husband to take to work because that was all they had. Most people had gardens and had canned food for the winter. Since they were newlyweds, they did not have any canned food stored. When she got pregnant, her husband told her to, “Plant her feet at her parents’ table once a day” so she would get enough nourishment to have a healthy baby.

She told how she would lay their baby on a diaper in the hot Arizona summer because it was too hot to wrap the diaper on the baby. She told us of ancestors who signed the Magna Charter, who crossed on the Mayflower, who pioneered new lands, who struggled and worked and lived. These stories taught us that we could overcome the challenges of our day like our ancestors did in their days. And the stories she told made us curious to learn more stories about our family.

Now that I am a grandmother, it is my turn to tell the stories to my grandchildren about their ancestors. It is up to me to connect them to their family, past, and present. Technology makes that easier. We can open up an ancestor’s profile on our family tree, see the pictures, and read their stories together. With our phone or iPad, we can snap a photo of a person and upload it to our ancestor’s profile and share the story of that picture in the process. Sharing these pictures and stories sparked curiosity in my grandchildren to learn how to find information about their ancestors.

Even though my grandchildren live far away, we schedule video dates to work on our family history research together. We feel a deep connection as I show them how to evaluate records and find documents that extend our family tree. When they visit, they pull out their iPads and phones and sit by me while we analyze the records and attach them to the appropriate people. Their mom and dad join us, and we have three generations working together on family history. What started as a curiosity is becoming a hobby for all of them.

One night, my son and grandsons and I were all working together on the same family. Each of us was on our electronic devices. Because I am a professional genealogist, I acted as the quality assurance department and checked everyone’s work on my laptop. I was concerned the children would make mistakes. However, by the end of the night, I discovered great joy in doing this work simultaneously and was amazed at their ability to evaluate and analyze records. They were moving beyond the hobby stage.

“I found his death date,” my son called out as he attached the Social Security Death Index record to the new person we found for our family tree.

“He was married!” We called out simultaneously. I was looking at his marriage record on a DNA matching site. My grandson found his “Find a Grave” record that showed he was buried next to his wife.

“He has seven children, not six,” my grandson hollered out as he attached a 1930 U.S. census on his phone.

We were all laughing and embroiled in searching for all the information for this family from our past. By the end of the night, our three generations had identified and documented seven more people for our family tree. The best part was my two grandsons, ages 11 and 13, snuggled next to me, working on their own devices. We were connected as we connected the past.

Now over one year later, my grandsons are obsessed with family history. Their curiosity about family history has now become more than a hobby, more than an obsession; they, like me, are incurable! When I see them on their phones or iPads and ask what they are doing, the answer they give most often is “family history.”

If you need some assistance getting your family history jump-started, Legacy Tree Genealogists is ready to help you gather some stories to share with your family. We can’t guarantee an ancestor who hid under a bridge during the American Revolutionary War, but who knows what we will discover?! Contact us for a free estimate.