We recently sat down with researcher Brandt Gibson to discuss French-Canadian research and how it might differ from other areas of genealogy research. Not only did we get some great information, but we learned a lot about what drives a researcher like Brandt.

Q: Would you introduce yourself and tell us about what initially interested you in genealogy and French-Canadian research?

A: My name is Brandt Gibson and I’ve been a researcher for 18 years. I’ve been working for Legacy Tree Genealogists for a little over three years.

My grandmother got the genealogy bug and sent me a handmade pedigree chart of her ancestors with some pictures that she’d found of her grandfather, great-grandfather, and others. There were people that I’d never seen, and when I saw that, it just blew my mind. I felt like I needed to know who these people were and started getting into researching my family. It’s been an obsession ever since.

As far as Canadian research goes, that was where I got my start. My great-grandfather’s family on my father’s side was Irish and immigrated to New Brunswick, Canada. I decided to see if I could look them up. So, I went to the Family History Center at my college, Brigham Young University in Utah, and looked up the 1881 Canada Census. And after three or four minutes of cranking through microfilm, I found the family and I thought, “Wow, this genealogy stuff is really easy.” Unfortunately, that turned out not to be the case most often. But that success got me interested in seeing where my family was from, both here and abroad. 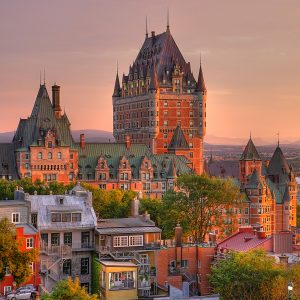 Q: In what ways does Canadian research differ from other research you do?

A: A lot of people don’t know that Canada wasn’t Canada as we know it today, until 1867. Before that, it went through a lot of changes in government, as well as boundary changes. Quebec was the name of a city founded in 1608, which became part of the colony of New France in 1663. New France was given to the British a century later, and most of it was incorporated into the province of Quebec in 1774. The province of Quebec was renamed Lower Canada in 1791, and then Canada East in 1841. When Canada came together in 1867, the name was changed back to Quebec. Therefore, when researching, it is important to be aware of the name and boundary changes of the different provinces.

In some Canadian government records, religion is recorded, which isn’t common everywhere. If you look at the Canadian Federal Census, for example, it will give you the residents’ names, ages, and what religion they claimed to practice. That can be very helpful, especially if you have more than one person in the area with the same name, and you know your ancestor was a member of the Church of England versus Presbyterian, for example.

Q: Have you had done any work in Nova Scotia or New Brunswick?

A: I’ve done some research in Nova Scotia and New Brunswick. The records that we have available from Nova Scotia are pretty good. They go back to the 1800s and the Family Search Wiki, for example, has a fantastic compilation of what is available for those and other areas. Newspaper records in New Brunswick are fantastic. I’ve seen a lot of really great information that was recorded in newspapers that did not survive in any other reference source.

Q: What areas do most of your projects come from?

Q: Do you speak French?

A: I do not speak French. In researching French families, it helps to speak French, although it’s not a requirement. I have some French-Canadian ancestry and researching those families over time, I’ve become familiar with many of the words that I need to know, such as terminology for baptisms, burials, marriages, and births, for example. It is helpful to have someone fluent in French to transcribe and translate records. You might get some nuggets that are buried in records that you might otherwise miss if you are not familiar with the language.

Q: Can you give us some idea of the process of researching Canadian immigrants from France?

A: Tracing immigration from France to Canada depends on the time frame. In the early years, a lot of the settlers were soldiers sent to colonize what was New France. There will be military records to describe where individual soldiers or specific units were from. The imbalance that was created – with a majority of male settlers vastly outnumbering women – led to the creation of The Order of the Daughters of the King program. Women from France were recruited to immigrate to New France and Quebec, specifically to marry these soldiers and colonizers, and to start large families. Records for the women that were recruited and sent through the program are pretty good. They’ll tell you where they were from in France, who they married, and their children’s names.

There is a lot of documentation for certain families, such as the Drouin Collection and the Tanguay Collection. Quebec has large compilations of records of these immigrant families from the 1600s through the 1800s. These collections can help researchers get an idea of where in Europe that individuals in those families were from.

Q: What kind of brick walls do you encounter and how do you get past them?

A: In many cases, it comes down to becoming familiar with the records in the area, the history, the political and cultural history of the area, and knowing where they would have come from and when they arrived.

There was a project that we had some time ago where there was a family that had left the U.S. for Canada in the late 1700s but tracking records from the U.S. didn’t lead to anything. It was helpful to know that the family had gotten into Canada sometime around the late 1790s and that the Canadian government at the time was issuing land to people who were willing to settle in the area to farm and improve it.

We were able to determine that the family was issued land in a region of Ontario and then constructed a history of what they had done in that area. So just becoming familiar with the history of the area, as well as the culture and the laws, can help uncover information that you won’t be able to find by throwing names into the search engines.

Q: Can you tell us about some interesting stories that you’ve discovered?

A: On my French-Canadian side of the family, I became aware of an ancestor that lived in Alberta. Searching for information in newspaper records led to the discovery of a story that no one in my family had known about. My ancestor was almost murdered by his wife. They got into an argument, and she grabbed a gun and shot him. He was able to escape to a neighbor, who took him to a hospital.

This story unfolded in detailed newspaper records in terms of who was involved, the timeframe of the incidents, and even identifying extended family who came in to lend support or were involved in the incident.

Major newspaper archive websites, such as Newspapers.com and Newspaper Archive, have large databases of Canadian newspapers, not just U.S. newspapers. They can be helpful in finding stories about your family that you won’t be able to find anywhere else.

A: Using a professional genealogist versus trying to do it on your own is a personal decision. We would all love to be able to spend unlimited amounts of time researching our families, but the reality of taking care of work, family, and other obligations can limit the amount of time we can spend learning about the records, history, and culture of specific areas. Being able to enlist the services of somebody who has dedicated time available and is experienced in researching particular geographical locations can move things forward in a much faster and more convenient way than if you were on your own.

If I weren’t a researcher in this field, I wouldn’t presume to try to trace my ancestors back to France. I would hire an expert to research French records because they know the language, the culture, and where to look, which I would not be able to identify on my own.

Q: Is this is where onsite researchers come into the picture?

A: Exactly. If I am researching a family where the line goes back to France, we at Legacy Tree Genealogists have a network of researchers to reach out to. Some may live in the U.S. and speak French, so they could do online research. But we can also contact onsite researchers and work with them to identify who we are looking for. We then incorporate all of our information and findings into reports that we give to our clients.

If you have French-Canadian ancestors and want to do some digging yourself, take a look at this article that provides the top 3 online resources for researching French-Canadian Ancestry. If you get stuck along the way and need some help, contact us for a free estimate on professional genealogy research.