Looking Back: The 1950 U.S. Federal Census is Coming Soon!

Legacy Tree Genealogists’ Sarah Gutmann talks about the soon-to-be-released 1950 United States Federal Census and how it can be used to further genealogical research. She also explains when and how the database will be available online and searchable.

Put on your poodle skirt and throw on an episode of I Love Lucy because we will soon be able to look back at the 1950s! On 1 April 2022, the National Archives will release the 1950 Census to the public.

As is standard practice, precisely 72 years have passed since the census enumeration. With the help of the post-World War II baby boom, from 1940, the United States population increased by 14.5%. Therefore, the 1950 United States census will display the information of more than 150 million people! 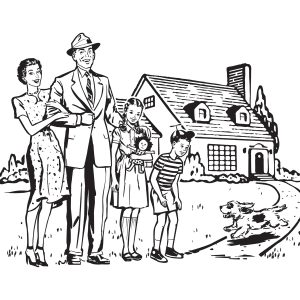 A snapshot in time

Whether you are a seasoned genealogist or just starting the rewarding process of learning about your ancestors, census records are an excellent resource. In a sense, they provide a snapshot of your family in time. You can use census records to measure how an individual or family grows and changes over time.

However, the information on census records is not always accurate. Even though census takers wrote what they heard and the person providing the information tried to be as accurate as possible, errors did occur. Our immigrant ancestors may not have fully understood what was asked of them, and a thick accent may have been difficult for a census taker to hear. It was not that unlikely for an individual not to know how to spell their name in the past. The person providing the information to the census taker may not have been the best representative for the family. Census takers were allowed to interview children and neighbors if the head of the household or their spouse was unavailable.

Even with its mistakes, census records remain an excellent springboard for diving into other record collections.

What will we be able to discover in the 1950 census?

Like previously released 20th century censuses, the 1950s census asked for the individual’s name, relationship to the head of household, age, race, age of last birthday, place of birth, gender, marital status, and naturalization status for those who are foreign-born. Those over the age of 14 were asked if they were working or keeping house. Five percent of the American population were asked supplemental questions, including their parents’ birthplace if they served in the U.S. Armed Forces, and their income.

The United States Census Bureau reports those living in the United States territories of Alaska, American Samoa, the Canal Zone, Guam, Puerto Rico, Hawaii, the Virgin Islands of the United States, and some of the smaller island territories. The 1950 census was the first census that included Americans living abroad, specifically military and government employees. Households were also encouraged to report their non-military and non-government employed American family living abroad.

The 1950 enumerators received a more thorough training than census takers of the (more distant) past. They were instructed not to simply take information from the person who answered the door, but instead, speak with the “presumably best informed” individual.

Enumerators were placed in groups of approximately 15 and assigned a crew leader. The crew leader would revisit families to double-check information and assist the census taker with difficult-to-reach areas.  To ensure newborns were counted, separate infant cards were filled out for those born after 1 January 1950. “Missed Person” forms for those not counted appeared in newspapers. Census takers were also sent to hotels to gather data on transient persons.

A searchable index within a few weeks after release

Although the National Archives is releasing the 1950 Census on 1 April 2022 you won’t be able to wake up that morning and start typing in your family’s names into your favorite genealogical database. Every name still must be indexed to be easily searchable. When the 1940 census was released in 2012,  it took about four months for Family Search and other databases to release the searchable index. Ancestry.com announced it would be applying handwriting recognition artificial intelligence and algorithms to create a searchable index for the 1950s census. They predict a searchable index within a few weeks after release.

If you want to be a cool cat, there is a way you can view your family in the 1950 census before it is indexed by locating their enumeration district. If you know the address, you can plug it into this free website. Once you have narrowed down the enumeration district, you can go into the 1950 census on Family Search and pull up the specific district. Now you can manually scroll through a few dozen pages to (hopefully) find your family.

Well, it is just about time to shake, rattle, and roll! We hope you have a ball discovering your family!

Legacy Tree Genealogists has extensive experience in helping clients trace their ancestors from all over the world, and we can help you dig through census records to find details about your ancestors to preserve the details of their lives. Contact us today for a free quote!

Sarah Gutman started working on genealogy as a hobby at the tender age of 13. She is a member of the Association of Professional Genealogists and earned a MA in English and American History. Sarah specializes in the Mid-Atlantic United States, Europe, Italy, Great Britain, and Germany. She started with Legacy Tree Genealogists in 2021.