Legacy Tree Onsite: Exploring the Archives of Bosnia and Herzegovina

Legacy Tree Genealogists works with researchers around the world to access records for our clients. We recently asked one of our onsite researchers to share valuable information on the resources available for family history research at various archives in Bosnia and Herzegovina. 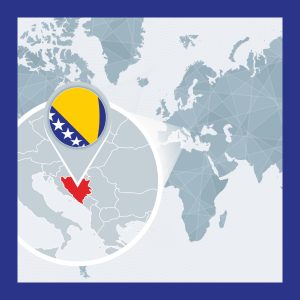 The country’s archival holdings suffered from war during the 90s and from more recent events as well. In 2012, approximately 80% of the National and University Library collections, housed by Sarajevo’s City Hall, were destroyed by fire in a bombing.

The websites of many regional Bosnia-Herzegovina archives offer little digital resources for genealogists. Records such as birth, marriage, or death records, regardless of religion, are not online. Only the History Museum and the National Library of BiH (Sarajevo) offer the option of online searching through their archival collections. Researchers must request historical information by submission in writing to the respective archive.

In 1981, the first complete review of archival material in Bosnia and Herzegovina was published as part of the edition Archival Funds and Collections in the Socialist Federal Republic of Yugoslavia. Today, the 462-page guide “Vodič Arhiva Bosne i Hercegovine,” published in 1987, and its subsequent supplements, printed in 1993, remain the premier resource for researchers. Researchers can find copies at fourteen libraries around the world.

Key records for genealogical research are birth, marriage, and death records. Before 1946, the responsibility of recording these life events in the territory of today’s Bosnia and Herzegovina rested with religious entities like the Catholic Church, the Orthodox Church, and the Islamic Community of Bosnia and Herzegovina. The metrical registers maintained the recording of births, marriage, and deaths by religious officials. After 1946, the recording of these records became the responsibility of the local Register Offices, and this practice continues today.

Political Divisions and Their Impact on Bosnia-Herzegovina Records

The Archival System of Bosnia-Herzegovina

The oldest record collections originate from Austria-Hungary’s rule over Bosnia and Herzegovina, while other records (1918–1941) are from the Kingdom of Yugoslavia, and most records cover the period of Socialist Yugoslavia (1945–1991)

The remaining archival locations have a limited if any, web presence.

Museums and libraries are also excellent repositories for genealogical research in Bosnia and Herzegovina. A selection of museums which may hold information about your ancestors originating from Bosnia-Herzegovina:

The Archives of Jewish communities (Sarajevo, Doboj, Mostar, and others). This archive has relevant documents for Holocaust research.

Outside Bosnia and Herzegovina, the Jewish Historical Museum in Belgrade (Serbia) holds a significant amount of material about the Holocaust in Bosnia. Also, resources may be available in select Croatian archives, such as the Croatian State Archive in Zagreb and Osijek, which have significant Holocaust record collections.

If you need help researching your ancestors from Bosnia-Herzegovina, the experienced team at Legacy Tree Genealogists will exhaust all possible resources to extend your family tree. Our network of onsite researchers has access to the archives you need to make serious progress on your family history. Contact us today to discuss your research goals and request a free quote!