This client project (shared with permission) delves into tracing the journey of a convict ancestor, sent to Australia for pickpocketing.

One of our Australian clients came to us with an Oliver Twist-esque story about her teenaged ancestor who was convicted of pickpocketing in England in the 1820s and sent to the Australian penal colonies. She wanted to know—was he an impoverished pickpocket in a gang of young pickpockets, or might he have come from a respectable family and been wrongly accused? We were on the hunt to find out.

John Coates was tried on 11 May 1826 in Middlesex, London’s Central Criminal Court, commonly known as Old Bailey—picture dark wood, long robes, and powdered wigs here. John Clark, John Coates, and Thomas Smith were accused of stealing a handkerchief worth 2 shillings, 6 pence from James Hardy. The three defendants were tried for Larceny from a Person during the Old Bailey May session. Smith was found not guilty. Twenty-one-year-old Clark and 15-year-old Coates were found guilty and each sentenced to be transported to Australia for a period of fourteen years.[1]

Transportation of Convicts to Australia 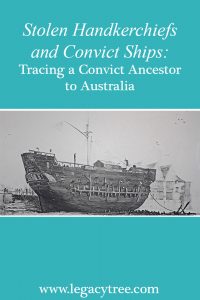 It was common to have a significant delay between conviction and the actual transportation to Australia. During the intervening time, the convicts were often held on prison hulks, former battle ships stationed primarily along the Thames that were afloat but not worthy to head to sea. Historically, the prison hulks and British transportation of convicts to Australia were a tangential result of the American Revolution. Prior to war, the American colonies were the primary destination for convicts sentenced to transportation. The war, however, halted the flow. After conviction, John Coates and John Clark were both assigned to the hulks. From Newgate Prison, John was first moved to the Euryalus Hulk moored at Chatham on 24 May 1826. He remained there until his transfer to the Dolphin on 19 October 1827 at 16 years old. John’s physical condition and behavior were both consistently described as good in the prison registers. John arrived in Australia to serve his term in 1828.

A Father’s Plea for Leniency

Court records also contain petitions for leniency filed following a trial and can contain extremely useful information. John Coates’ father (also named John Coates) filed a petition requesting that his son be granted Mercy and be allowed to serve his sentence in England. John, Sr. contended that his son essentially got caught up “by an unexpected meeting with 2 other Boys at the time they committed a crime.” Character witnesses, including James Hardy, the victim of the crime, certified that John was not a repeat offender and also recommended Mercy. In signing the petition, they stated that they believed John, Jr. to be “worthy Mercy being satisfied if not innocent of the charge tho in company with the perpetrators, that it is the first charge of this and any other kind” and “it is the first bad deed he ever commited [sic].”

The Coates address was also included, showing that they lived at No. 90 Great Peter Street, Westminster. Details about the neighborhood around Great Peter Street help put John Thomas Coates’ young life into context. Before the mid-nineteenth century, the area within and around Old Pye Street, St. Ann’s Street, Great Peter Street, and Duck Lane had become one of London’s most notorious slums. Charles Dickens was familiar with the area, calling it the Devil’s Acre because of its high crime and poverty, and squalid living conditions. Dickens described how many boys of the area relied on pick-pocketing and thievery to feed themselves and help their families.[2]

Court records, censuses, and church records were just a few of the resources consulted in this project and were key to finding important clues about John Thomas Coates’ life in England before being transported to Australia. Several My Heritage collections were used to identify men named John Coates having children around the years of young John’s conviction, including England Births and Christenings, 1538-1975 and the 1841 England & Wales Census. The Coates family were not located on Great Peter Street after John’s conviction, implying they were able to escape the slums.

Though he was not granted Mercy, it appears John Thomas Coates was just a teenager who got caught up in the activities of his peers and his environment and made a poor choice. His choice affected his future and that of his posterity, our client. Thanks to the talents of our Legacy Tree Genealogists researchers, our client now has the details that turn family lore into family facts.

Do you have a family legend you’d like to prove or disprove? A research question you can’t resolve? The researchers at Legacy Tree Genealogists can provide answers to your family history mysteries by drawing upon various record collections and piecing together important clues provided by historical and social context. Contact us today for a free quote!