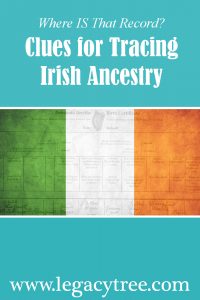 Those who have been involved in tracing their Irish ancestry are aware of the challenge of record loss during the fire at the Four Courts Building in 1922. The good news is that there are still many Irish records which survived. The challenge is to locate them! Depending on the type of record, they were kept—and indexed—using different geographical divisions. It is vital to know specifically where the ancestral family was from in order to locate them in documents of interest.

The smallest division in Ireland is the townland, roughly equivalent to a neighborhood in the United States. This is the most ancient land division and is often named for local landmarks like lakes, mountains, or man-made structures like churches or monuments. Townlands generally range in size from several acres to hundreds of acres or more, especially in mountainous areas. Within cities, they are often a section of a street. Whether in the town or country, the number of inhabitants in a townland is generally only ten to twenty-five families. The name of the family’s townland was usually recorded in church records of baptisms, marriages, and burials, and was often included in vital records kept by the government.
The District Electoral Divisions (DED) were established in 1838 with the passage of the Poor Law Act. Each division contains several townlands, and those living within each division were charged with the care of the poor in their area. Census records are commonly organized by the DED name, so it is important to be familiar with the place names included in the DED of interest.

Poor Law Unions (PLU) were also created in 1838 and united several District Electoral Divisions. These divisions later became the basis for reporting births, marriages, and deaths by the government, generally beginning in 1864, though non-Catholic marriages were registered beginning in 1845. Also called Superintendent Registrars’ Districts, their boundaries could cross parish and even county borders, and again—the names of the Poor Law Unions are different from the parish and DED names.

How to Begin Tracing Irish Ancestry

Counties in Ireland have a history stretching back to ancient times. There are thirty-two counties in Ireland, six of them in Northern Ireland. Knowing the county of origin of Irish ancestors is imperative in order to even begin research there. So where to begin? Start by discovering as much as possible about your Irish ancestors’ place of origin in church records, newspapers, and burial records. Knowing their townland or civil/church parish is ideal. 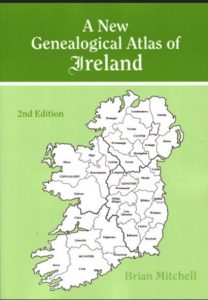 Next, become familiar with the different divisions which cover that place. A wonderful resource is Brian Mitchell’s A New Genealogical Atlas of Ireland. This book contains four maps of each county in Ireland which can be laid over each other to compare boundary lines for different divisions. One page includes the civil parishes, another the Catholic or Protestant parishes, another the Poor Law Unions, and finally, the baronies and dioceses.

Locate your ancestors’ townlands on a map in the Griffith’s Valuation section at the AskAboutIreland.ie website. Search using “Griffith’s Places” on the home page, then click “Map Views.” The maps reflect the townlands in the mid-1800s, with townlands in smaller letters and civil parishes in larger letters. It is possible to toggle between the old maps and modern ones by using the slider at the top-right corner of the page or go to satellite view at the top left. Take time to become familiar with the names of nearby townlands and parishes as well as the name of the Poor Law Unions or Registration Districts where they are located. Some family records are located just over a border from where they actually lived, and familiarity with all the possible division names helps locate documents more quickly.

If your Irish ancestor was born, married, or died in 1864 or later, begin with the civil registration records and the name of the Poor Law Union (PLU) where your ancestor’s event would have been recorded. The records are searchable with links to digital copies of the register at the IrishAncestors.ie website.  Other websites, including RootsIreland.ie, Ancestry.com, and FamilySearch.org also include indexes to civil registration, but do not have links to the original registers.

Many church registers of baptisms, marriages, and burials are searchable online using the name of the religious parish. The subscription website RootsIreland.ie contains the most complete database, though Ancestry.com and FamilySearch.org contain many records as well. Once a Catholic record of interest has been located in an index, go to the free website Catholic Parish Registers at the NLI and the original records can be viewed or obtained. The IrishGenealogy.ie website can link directly from their index to parish records for the Church of Ireland in Counties Carlow and Kerry, Presbyterian records in Dublin, and Catholic records in Dublin, Kerry, and Cork & Ross. Many parish records are available on microfilm at the Family History Library in Salt Lake City, Utah, if links to records are not online. Search their catalogue at FamilySearch.org.

Census records in Ireland are only available for 1901 and 1911 and are searchable at the National Archives of Ireland. These can be searched by name and location (county, DED, and/or townland), but also by religion, occupation, relationship to head of family, literacy status, county or country of origin, and more. According to their website “you can now search for female married teachers in Co. Cork, or how many people spoke Irish in Ballyshannon, or how many Presbyterians there were in Roscommon.” Because families often stayed in the same townlands for many generations, it is often useful to look at the inhabitants of their townlands of origin in these censuses, even if your ancestors emigrated from Ireland before these censuses were taken.

Locating Irish records can be a challenge, but researchers at Legacy Tree Genealogists are available to lend their expertise as you learn more about your Irish ancestry and extend your family tree. Contact us today for a free consultation to discuss your specific project goals.