Are you struggling to come up with meaningful holiday gifts for your loved ones? Consider the gift of heritage! 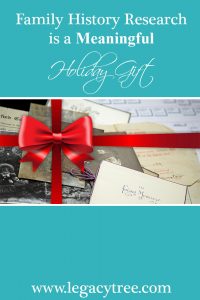 For many of us, the holidays mean family time. We gather together to celebrate lasting traditions and create new ones, drawing closer to the ones we love and strengthening ties with them.

Coming up with meaningful gift ideas for our loved ones, however, is a common struggle. What does she like? What would make him happy?

Family history projects make unique, personal, and thoughtful presents. Clients often have sought our help in completing family history research for their loved ones, and it’s always heartwarming for clients to deliver this gift of learning more about their roots.

Last year, one of our clients wanted to surprise his wife with her family history research for Christmas. Her ancestors were from Ireland, and quietly and without her knowledge, he looked through her old records and photos to gather information. We worked directly with him to find names, dates, and places of known relatives to serve as the springboard for our research. We understood the research project and its results would be a surprise, and we wanted our client’s wife to really love her Christmas present, so we enthusiastically dove into the work!

Tracing Irish Ancestors Across the Ocean

We knew from the client’s documents that his wife’s ancestor, Mary, had received a passport from London in October 1920. According to her daughter’s birth certificate, she had arrived in Pennsylvania by 1924. We began a search for her migration from Ireland to the United States between those years and found her in the passenger lists of the S.S. Carmania in February 1921.

According to this record, Mary was 5 feet, 2 inches tall and had a fair complexion, fair hair, and blue eyes. She departed from Queenstown, Ireland, and arrived in New York City, New York. At the time of the voyage, she was 18 years old, single, could read, and did domestic work by occupation.

We knew Mary’s father Martin was living in the Tubber area of southern County Galway in 1921 and Mary was also born near that area in 1903, so we searched for her family there in the 1911 Ireland census. The family was found living in the townland of Tonranny, which was part of the parish of Beagh. Beagh is modernly known as Shanaglish.

Diving Into the Past with Parish & Census Records

According to Samuel Lewis’s reference book titled A Topographical Dictionary of Ireland, Beagh was a vicarage on the road from Galway to Ennis. It was home to the ruins of a Franciscan monastery and a handful of castles built by the noble O’Shaughnessy family. The land had some “wasteland” and bogs. Each year “large fairs for cattle, sheep, and pigs” were held there. 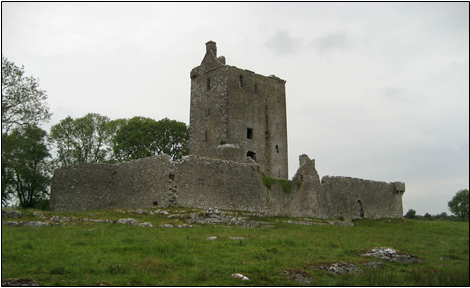 Beagh was the parish listed on Mary’s baptismal record. Her age in the 1911 census matched her birth year of 1903. Her siblings’ names matched as well, and we learned their birth dates from this record. Mary’s father Martin Halloran was born about 1862 and her mother Ann in 1868, both in County Galway. The couple reportedly married in 1886. Martin worked as a farmer, no doubt assisted by his wife. Now in their forties, the couple had had fourteen children, but only twelve were then living. Mary Ellen, age 8, was on the younger end of the family. Agnes was age 6, Elizabeth age 3, and Patrick 10 months old.

We next located Martin and Ann in the 1901 Ireland Census, living in the town of Gilroe in Martin’s parents’ household. Gilroe was located in the parish of Beagh, and Martin’s parents were listed as John and Kate Halloran. John was a farmer, and both he and his wife were Roman Catholic, as were their son and daughter-in-law. Their birth years were calculated based on their ages; John was born in 1837 and Kate in 1851, both in County Galway. The Halloran family lived in the Beagh area for decades, at least from 1892 to 1911, and very possibly earlier. This census also provided birth years for children—some of which we had not previously known. The children listed in the census were Josephine, Margaret, Catherine/Kate, Michael, John, Martin, Timothy, and Bridget. Many of them were attending school during the time of the census.

It was our pleasure to find primary documents that would give our client and his wife a chance to learn more about her Irish family.

And how did our client’s gift turn out? Our client was pleased with the results when he intercepted the binder and had it ready for her Christmas morning! But his reaction was nothing compared to that of his wife, whom the client relayed to us was not only thrilled with the in-depth research, but impressed that her husband had been able to carry out such a thoughtful gift without her knowledge!

Holiday Tip: Like many places, Ireland has unique traditions that would be fun to include in your holiday festivities. Or, you could learn about other holiday traditions around the world!

Are you looking to surprise a loved one this holiday season? Or perhaps you’re looking for the perfect gift to celebrate a momentous occasion–a birthday, anniversary, or retirement? Whatever the occasion, being gifted with the details of ones personal family history is certain to be a meaningful, treasured gift. Keep in mind most research projects take approximately 10-12 weeks to complete and plan accordingly. Or, consider a gift certificate for professional genealogy research that may be ordered at any time. Contact us today to get started!