*”Can DNA help me find my biological family?” We share one client’s journey from skepticism to success story. Shared with client permission.

Colette had always known she was adopted— her parents never hid that from her. They would say things like, “when we got you” instead of “when you were born.” She knew that she was different from her family and that she didn’t resemble either of her parents. From a very early age, Colette wanted to know whom she resembled and find out more about her birth family. 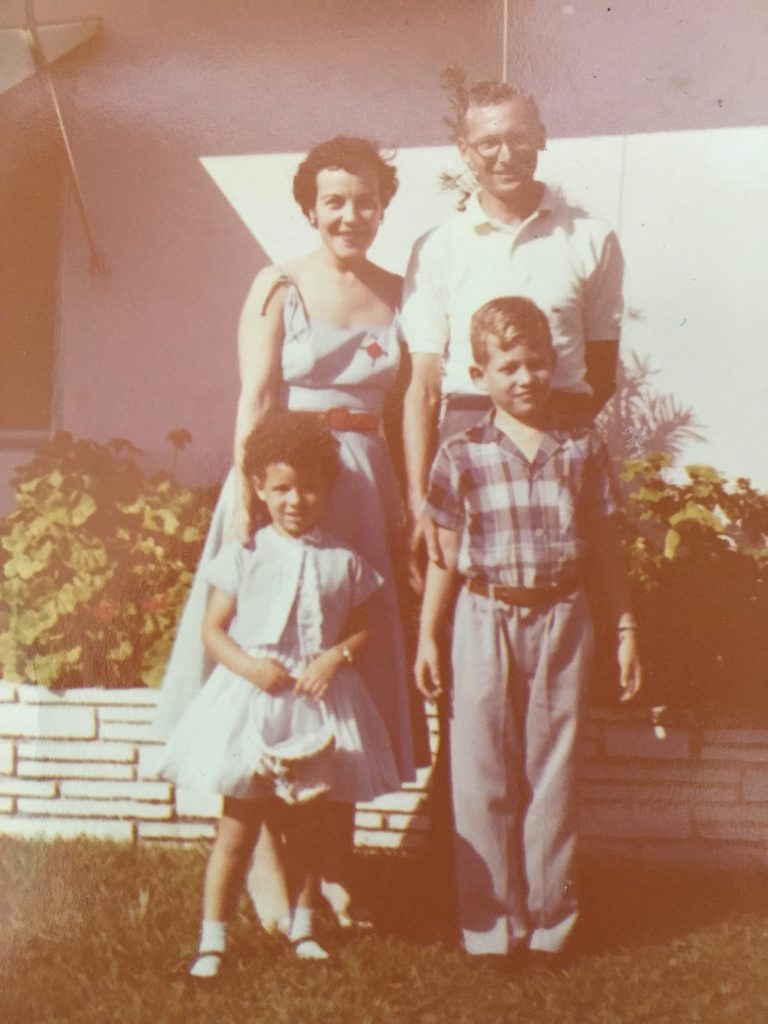 Colette, age 3, with her adoptive family.

At the age of 10, Colette remembers rummaging through her parent’s papers and finding her adoption documents. She discovered that her birth name was Noella and that she had French Canadian heritage. The non-identifying adoption information also told the heart-breaking story that she was the youngest child in a family of 5. Her parents placed her for adoption because they couldn’t afford to keep her and told her three older siblings that she had died at birth. Her mother worked as a sewing machine operator in a factory making 40 dollars a week and could not take time off from work because of their heavy bills. Her father blamed himself for his inability to provide for his family. He felt he had failed his wife “grossly” by not earning more than he did. He had a hard time giving his daughter up for adoption but loved his wife and was willing to make any sacrifice to make her happy.

Also from these papers, Colette learned that at the time of her adoption, her older siblings were Philip, age 11, Yvette, age 9 ½, and Lorraine, age 7. However, she did not know the names of her parents or any other relatives. 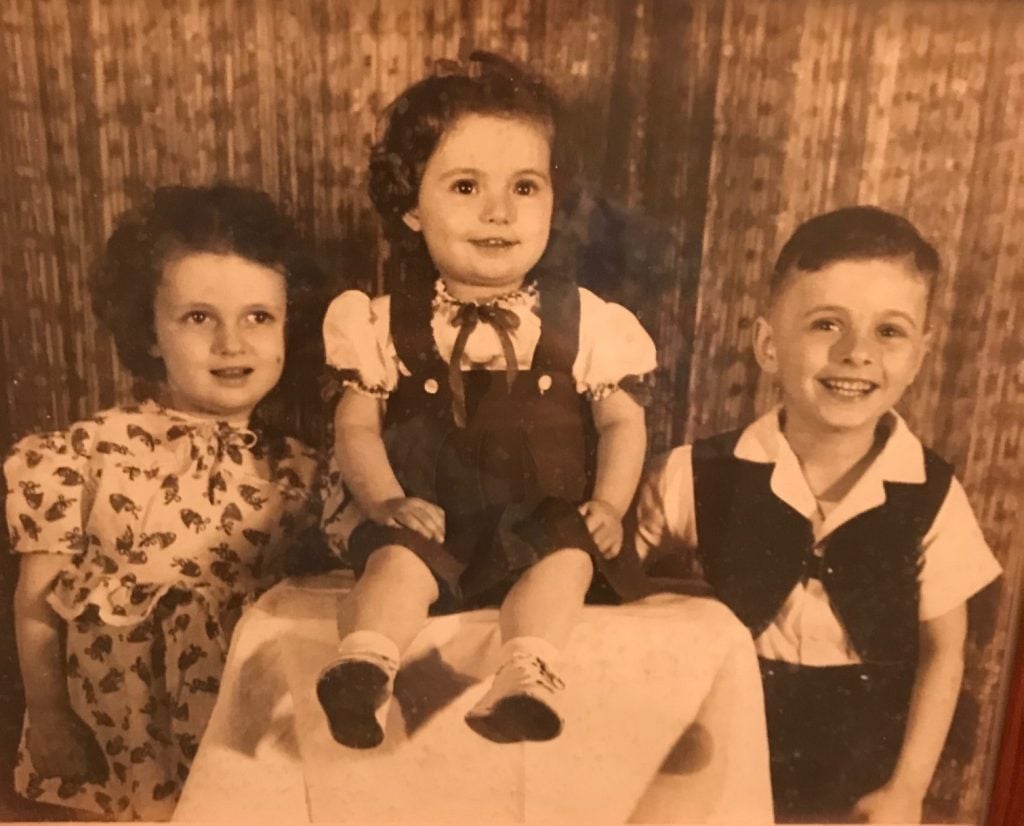 Colette’s Search for Her Biological Family

When Colette turned eighteen, she decided it was time to dig deeper. She turned to a judge in Miami and asked for her parents’ names or photos. The judge responded unkindly, saying, “Your parents gave you away, and that’s that, next!”

Colette never gave up though. She continued in her 20’s and again in her 40’s to attempt to gain access to old records from the hospital where she was born as well as documents from the original adoption agency, but never with success.

Could DNA be the answer?

At age 65, Colette’s good friend, Holly, proposed a new solution — to try MyHeritage DNA. After six weeks, the results came back, and they opened them together. Colette was speechless — she had no French roots but discovered she was 80% Irish! All those years her adoptive parents assured her that she was French.

Her parents named her Colette because they presumed she was French and was tutored to speak French. Throughout junior high, high school, and even college, she took classes in French. She even dreamed in French!

“Imagine my surprise to discover that I was almost 80% Irish! I was destroyed after learning I didn’t have any French roots. “I’m not French? Ok, what am I?” What little I did know about my heritage was now totally wrong. That’s what made me decide to find out where I came from.” 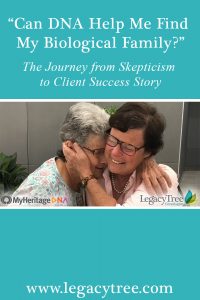 When Colette first contacted Legacy Tree Genealogists, she admits she was skeptical of their ability to identify her birth family through DNA analysis. Her project manager, Carolyn, arranged a conference call with another client for whom they had recently identified a paternal grandfather, and their conversation was very helpful in reassuring Colette of the likelihood of success. After thinking it over for several more weeks, Colette decided she was ready to proceed. Together with her project manager, they defined Colette’s goal to find her birth parents and family.

Just a few months later, Colette received a call from Carolyn that forever changed her life.

Colette explains, “Carolyn called to tell me she found out my mother’s full birth name — Noella St. Laurent. When the realization that I had been named for my birth mother sank in, I cried and cried. In addition to learning more about my parents, I learned that I had two siblings that were still alive. The team from Legacy Tree Genealogists found exactly what I had asked for — they found my birth family!”

Colette’s closest genetic match on MyHeritage shared enough DNA to be either a first cousin, half-nephew, or great-nephew. Because of the age difference, the researchers at Legacy Tree hypothesized he was a great-nephew. Furthermore, he listed his great-grandparents as Joseph St. Laurent (1916-1989) and Noella Roy (1922-2005).

They were then able to locate Noella’s obituary. Noella named her children Phillip, Yvette, and Loraine. All of these names corroborated with the information from Colette’s adoption papers — age, location, occupation, and more.

Using other genetic matches and document-based research, the team at Legacy Tree helped Colette continue to build out her family tree and extended her paternal and maternal ancestry back three generations to French Canada. Her ancestors migrated to French Canada from Ireland during the Great Potato Famine. Finally, the 80% Irish ethnicity that she received in her MyHeritage DNA results made sense.
Furthermore, they found that although her sister Loraine was deceased, Yvette and Philip were still living.

Colette waited until the time was right to reach out. She gathered her courage and made contact first with a reported niece, Lisa, and told her the story that the adoption agency had described, hoping she would pass the information onto Colete’s siblings.

Yvette will never forget the day Lisa reached out to her.

“Lisa read me the text from the person claiming to be the baby who was supposed to have died all those years ago. Since I hadn’t told anyone about my Mom’s last pregnancy and coming home with empty arms — not my kids nor any other relatives, I knew that we were on to something.” Yvette explains her surprise in finding her sister after all this time.

“My parents and siblings lived in Miami. I had a brother 18 months older, and a sister two years younger than me. When I was nine, I remember my mom being pregnant. When the time came, they went to the hospital. When they came home, they didn’t have the baby. I remember standing with my arms out asking, “Where’s the baby?”

Yvette explains that her parents were quite strict and she never questioned when they said that her baby sister “passed at birth.” She never asked, and she couldn’t remember anything else that was said about the baby. Life went on.

In retrospect, she always picked up that something wasn’t quite right about the situation. She couldn’t remember getting ready for the baby — crib, clothes, and diapers. She also remembers wondering why there wasn’t some kind of service or funeral.

Although nothing was ever brought up again, she still sometimes found herself having thoughts pop into her head about the baby. Was she out there?

As Yvette grew older and had four children of her own, she thought less and less about it.

Everything changed when her niece, Lisa, got in touch to confirm her sister was, in fact, alive and ready to meet.

After four months of corresponding via FaceTime, Colette finally flew to Tampa Bay to meet her sister, Yvette.
Watch their emotional reunion here:

Colette explains, “I now have two families. I love them both with all my heart, but differently – something only being adopted can allow you to understand.”

The experts at Legacy Tree Genealogists are experienced at helping reunite families, present and past. We can help you make sense of your DNA matches and identify your unknown family members. Contact us today for a free estimate.