The conflicting information in sources can be a brick wall in your genealogy search. If or when you run into this unfortunate situation, here’s some tips to help resolve those conflicts!

there – tracking down an ancestor and finding an answer we’ve been looking for on a document, only to find another record that says something different!

The death certificate has a different date of death than the headstone, a census gives a different place of birth than a marriage record, and so on. This is a common occurrence in records from earlier time periods when people didn’t put as much importance on ages, spellings, etc. as we may now. Do you ever find yourself stuck when this happens, uncertain which one is correct? Next time you hit that wall, follow these two guidelines for dealing with conflicting information. While they aren’t foolproof every single time, they tend to be helpful in most instances.

1) Consider Whether the Record is a Primary or Secondary Source

You may be straining to remember back to sixth grade when your teacher covered those topics in English or history, so here’s a reminder of their definitions: a primary source is a record created at the time of the event described, usually by someone who was a direct participant or witness. Examples could include diaries, letters, photos, or certain government records, like birth certificates. A secondary source is a record created more distantly from the event by someone who wasn’t necessarily there. It may even be an analysis of the event, or someone else’s interpretation of it. For example, the history of a county, a biography, an obituary, and even the birth information on a tombstone would be considered secondary.

The key is generally to put more faith in the source that was created closest to the event and that had the greatest chance of being made by the person it describes, or by a direct relative (like a parent) who would have been present at the time the event occurred.

How does this apply to conflicting sources? Let’s use an example. Suppose your great-grandfather’s headstone said that he was born 6 July 1894, but his World War I draft registration card said he was born 6 June 1895. Obviously one of these is incorrect (or possibly they both are). So, using the guidelines discussed above, which do you think you would be most likely to trust? If you picked the draft card, you’re right on. Think about it: Johnny went before the clerk himself in 1917 to fill out the information on the card. He even signed the bottom of it after reviewing its accuracy. But the headstone? He was already deceased and most likely had no input about what went on it. And if Johnny was 85 when he died, what are the chances that someone is still around who was there at his birth, and that was the person who provided the information for his tombstone? Not very likely. In this instance, perhaps the informant was an in-law who wasn’t sure of his exact date. Maybe the man carving the stone had written the date down incorrectly. Perhaps the grieving widow in her stress and anguish had simply misspoken. Either way, there is a much greater chance that this record is the incorrect one.

If you find two records that both say something different about your ancestor, go in search of more records. In the example above, you’ve got a headstone and a WWI draft card. Can you find a birth record? A marriage record? The 1900 U.S. Census which gave the month and year of birth for each person? In order to resolve conflicting information, it’s important to look for all available sources that would have listed that information. Chances are you’ll notice a pattern eventually. Five records might all list one thing, while only one or two list something else. In this case, you’ll still want to evaluate primary vs. secondary, but if even your primary sources are conflicting, you can choose to go with the majority.

A final example from a recent project we researched: a client’s ancestor had been famous during her lifetime – well-known enough to have newspaper articles written about her all over the country. Every single one of them said that she had been born in a fashionable neighborhood in an East Coast American city. Even her own son had been told she was born there. The truth turned out to be far different when we discovered her original birth certificate in a city on the opposite side of the United States, where she had grown up. The newspapers were 3,000 miles wrong – every one of them. Why did we go with the birth certificate rather than five different newspapers all saying the same thing? Because there are many reasons why a newspaper article written by a journalist could be incorrect or misled – but there really isn’t a chance a county registrar would arbitrarily create a birth certificate for someone who wasn’t actually born there. In this specific case, the woman herself probably had incentive to polish her past in an effort to make it seem more exciting since she was a celebrity, but the truth was in the courthouse records in California.

The bottom line is, take your time! Find as many sources as possible, and then consider when and where they were created, and by whom. By doing this, you should be able to confidently resolve many of the discrepancies you’ll find while researching your ancestors.

The experts at Legacy Tree Genealogists are here to help you connect with your ancestors and preserve your legacy for generations to come. Get started today by requesting your free quote. 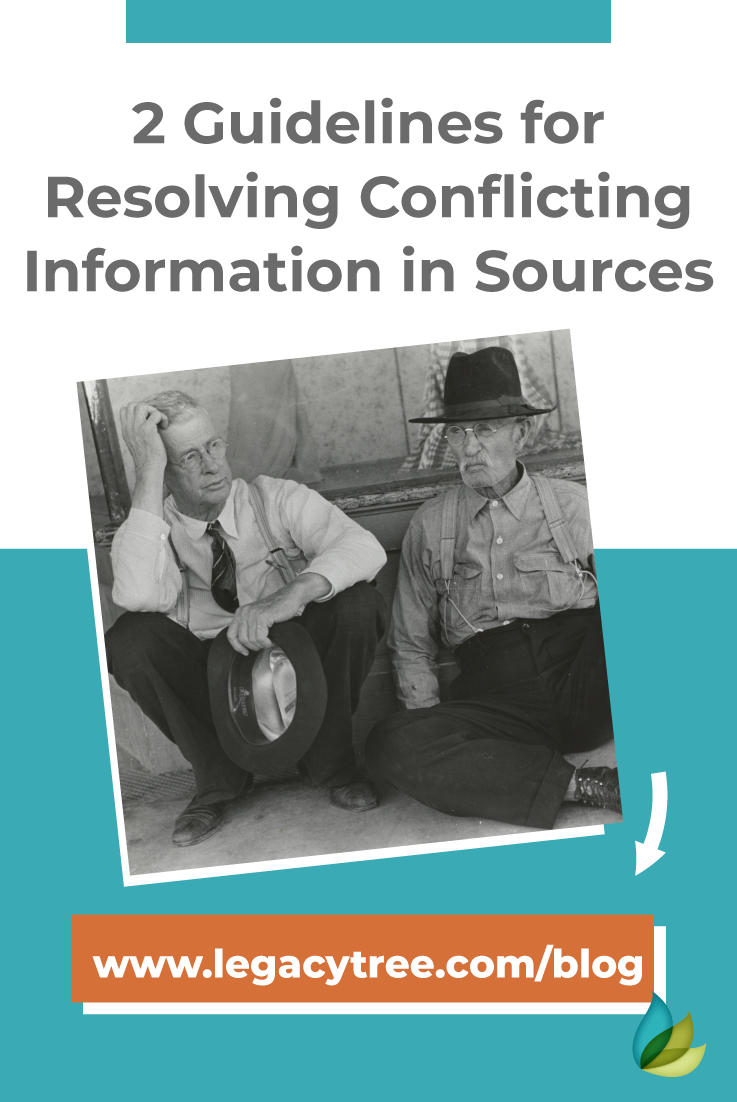 Previous article: 10 Ways to Tell That…You Might Be a Genealogist!
Next article: Perseverance Pays Off: A Lithuanian Case Study