As genealogists, we occasionally encounter funny genealogy records that makes us giggle. Here’s a collection of some of our favorites!

Most researchers have felt the thrill of discovering a little-known document that connects the dots on a family tree, but generally a lot of time is spent slogging through pages of records with little to show for the effort. However, researchers who spend copious amounts of time in censuses, wills, and land records are often rewarded with a few giggles to make the journey more enjoyable. The gems in this article were collected by researchers from Legacy Tree Genealogists.

The occupation of J.F. Brown was listed on the 1880 census as “whorehouse pimp,” and the occupation of his wife Maude was “whore.” It is unknown whether these jobs were self-reported or if the census taker used other means of ascertaining their employment.

Oliver Butts worked as a “pettifogger” on the 1860 census ,and his presumed son Eli Butts, age 23, was “running around.” Merriam-Webster defines a pettifogger as a lawyer whose methods are petty, underhanded or disreputable.

Charles V. Stewart, the census enumerator in Clifton, Mason County, West Virginia, in 1880 listed the occupations of several young children as “idle.” He apparently had high expectations for the work ethic of children under 10.

In American colonial times, names often reflected qualities or characteristics that parents wanted their children to emulate, like Charity, Patience, or Virtue. Preserved was a name associated with salvation – preserved from sin, death, or destruction. However, Thomas and Mercy Fish should probably have given a little more thought to the burden their son would be forced to bear when they named him Preserved Fish.

There is no direct evidence that the name Pleasant Bottoms inspired its bearer to become a soldier, but it could have easily been a contributing factor in the decision. His father Turner claimed land in Illinois awarded to his deceased son Pleasant Bottoms in 1852 as a result of his military service in the war with Mexico.

The Kay Hollis family of Lamar County, Alabama, chose similar-sounding names for their children. Between 1907 and 1930, they had daughters named Destie, Lestie, Bessie, Sessie, Essie, and Effie, along with sons Girlie, Earlie, Jonnie, and Gurty. It’s a given that the children would have been called by the wrong names from time to time.

Other examples of laughter-inspiring entries abound and are sure to brighten a monotonous research session. What “genealogical giggles” have you encountered in your family history research?

We’d love to help you with your family history, whether we’re breaking down brick wall mysteries, finding your biological parents, or just starting from scratch finding the stories about your ancestors. We may even find a few “genealogical gigles” in your family history! Contact us today for a free consultation. 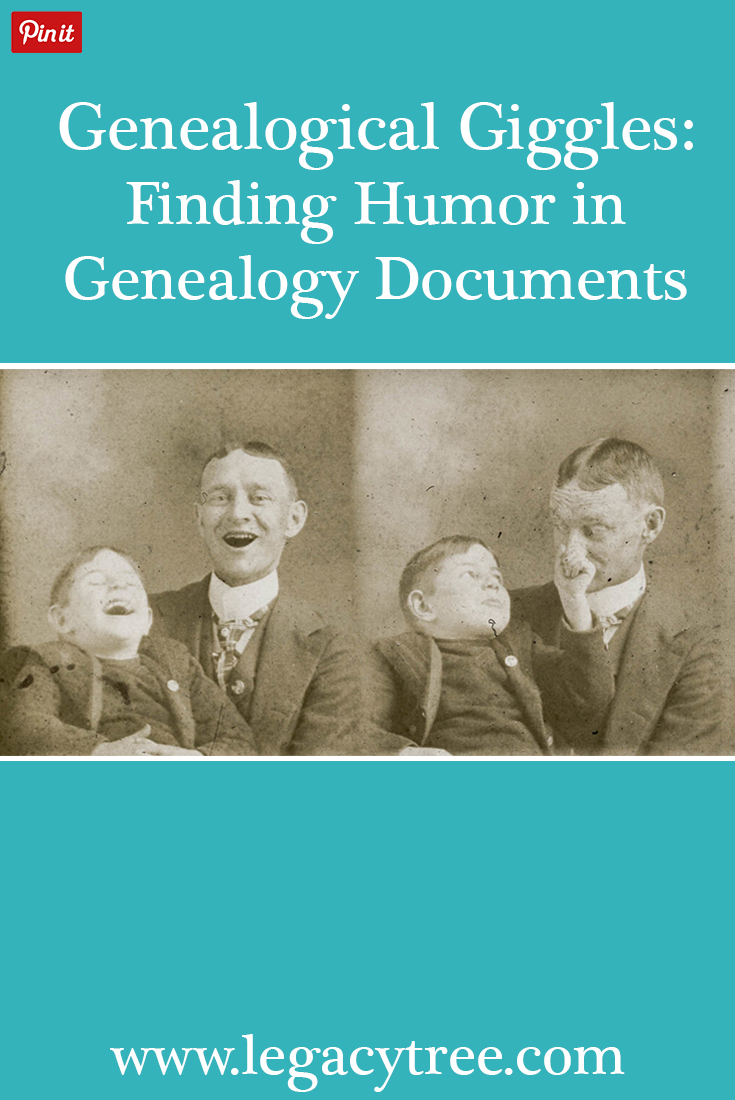