Today we’re going to discuss another important surname anomaly that commonly appeared in areas using patronymics and sporadically elsewhere: Farm Names. But first, it’s important to understand how surnames have evolved, and the nuances that can create brick walls in our genealogy research if we aren’t aware of them. Let’s dive in!

Lesson in History: The Birth of Modern Surnames

Before different religious factions broke off from the Roman Catholic Church, our ancestors who were not nobility or royalty had little reason to be recorded by name in any official registers. However, beginning in the early 1500s, as religious groups sought to keep track of their members, church records of baptisms, marriages, and burials began cropping up in parishes, eventually being replaced with government civil registration as the primary source for birth, marriage, and death information for our ancestors. Thus, record-keeping for the common people of Europe began.

The Use of Identifiers

While local populations remained relatively small, it was not important to use a family identifier such as a surname—everyone in town knew John (Jan, Johann, Ivan, etc.). But as populations grew, it became increasingly necessary to distinguish between different people with the same name. This began with nobility and wealthy landowners, followed by the bourgeois, and it finally tricked down to tenant farmers, laborers, and other common people. By the late 1600s most people were using some identifier such as a relationship (i.e. John son of x, Mary wife of x, etc.), an occupation (i.e. John the weaver, John the blacksmith), a description or a nickname (i.e. John Small), or a geographic name (i.e. John from x). Initially these identifiers were unique to one person, but within a few generations it became common for the name to be passed from one generation to the next.

The Transition to Patronymics

Some large areas followed a widespread pattern of using patronymics rather than a fixed surname. As explained in a previous blog article, a patronymic name is one that is created when a prefix or suffix is attached to the father’s name. For example, the patronymic surname Johansson can be broken into two parts: Johans’ son. This means that someone with the surname Johansson was the son of Johan. Likewise, a surname of Johansdotter is the patronymic version used for the daughter of someone named Johan. Because of this patronymic naming pattern, a brother and sister may have had similar, but different, surnames from one another.

In Scandinavia, northern Germany, the Netherlands (e.g. Holland), and parts of Eastern Europe they used patronymics for centuries before being legally required to switch to a fixed surname (this generally happened during the 1800s). This large-scale use of a “surname” that changed with every generation poses a unique challenge to their genealogy-inclined descendants.

Farm names: What are they and why are they important?

Farm names were used as an identifier connecting that particular family with land ownership or residence. However, how these names were used and what the name represented varied from region to region.

In Germany, (particularly the regions of Westfalen, Hannover, Lippe-Detmold, Rheinland, Oldenburg, and Schlesien) the use of a farm name denoted the status of being a land owner, so anyone who owned enough land to be called a “large farm” or an “estate farm” could be found using a farm name. A farm of this size and status might be owned by someone that was a butcher, a blacksmith, a weaver, or similar profession that would allow the farm to be generally self-sufficient; the market and church would typically be found in the nearest village. In addition to the farm name, a surname was often associated with the farm–during the transition into ownership they would use the surname associated with the farm and/or the farm name, add the term gennant or something similar, and then their original surname at the end.

In Germany, only the owner of this farm could be found using a farm name and passing it on to their children according to local inheritance laws. Consequently, land ownership was more important than your identity at birth. When a man inherited a farm he often began using the farm name as a replacement for his birth name, or a combination of the two names with the farm name appearing first followed by “alias,” “vel,” “modo,” “gennant,” or “dit” and the original surname. Farm names were so important that if a woman inherited a farm her husband took her surname and the farm name rather than following the tradition of a woman taking her husband’s surname. For this reason, it is essential to find the ancestor’s marriage record where the farm name first appears to know the ancestor’s original surname and whose family the farm was inherited from to trace these lines back correctly.

German farm names can include, but are not limited to, many names beginning or ending in -kamp or -hof. But there’s a catch! Not all Hof names (e.g. Hoffman) were associated with farms–some were occupational surnames. Examples of some German farm names that became surnames are: Kampmeinert, Ryskamp, Heitkamp, Hogenkamp, Niekamp, Pulskamp, Haberkamp, Moehlenkamp, Neuhof, Brinkerhof, Berkhoff, Eickhoff, Grasshoff, Hasselhoff, Kirchhoff. These are some of the most identifiable farm names, but there are many others that may appear to be normal names, but upon researching the family it comes to light that the name is associated with a farm.

In Norway, Sweden, and Finland farm names were also important, but connected to residence on a farm rather than necessarily denoting ownership. If a person or family moved from one farm to another they ceased using the first farm name and took on the new farm name. Norwegians still kept their patronymic and merely added the farm name as a second unique family identifier. If a family moved from a farm to the city, as many did during the Industrial Revolution of the mid- to late-1800s, they typically continued using their most recently acquired farm name. While it was not always the case, it was also common for Norwegian emigrants to use that farm name as their fixed surname when transitioning to a society not using patronymics. An example of this would be for a man named Lars Olsen Hagelund (Lars, son of Ole, from the farm Hagelund) to immigrate to America and begin calling himself Lars Hagelund. Conversely, this same immigrant might drop the farm name and take his patronymic as his new fixed surname. Although, just to keep things interesting, it was still possible for this same immigrant to appear in United States records as Lars Olsen or Lars Hagelund. 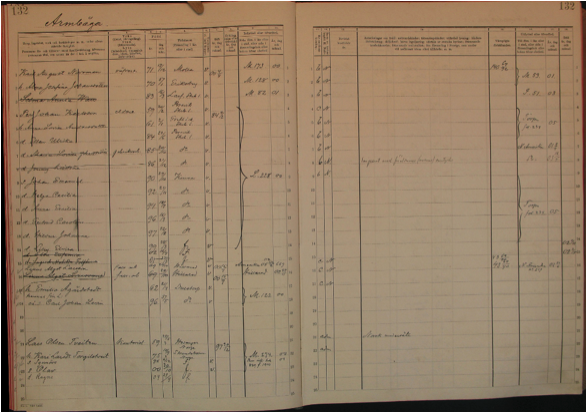 In Sweden and Norway, anything that was appended to the person’s name (given name + patronymic + appended name) was a farm name. When a Scandianavian person began using a fixed surname it was typically that person’s patronymic or the last farm name the family was associated with. Most Scandinavian surnames, unless they are a patronymic name, are farm names. Here’s just a few common farm names listed in one parish in Norway:

Farm Names in the Netherlands

In the Netherlands (specifically Drenthe, Overijssel and Gelderland provinces) farm names were used similarly to their use in Scandinavian regions, and did not correlate with ownership. A farm name was taken if the person or family resided on that farm and it was abandoned in favor of the new farm name if the family moved.

Researching farm names in the Netherlands can be a little trickier. Many people chose sillu names as their fixed surnames after the decree in 1811 from Napoleon required a fixed surname. Basically, to know if it was a farm name, you have to trace the family back to before 1811. If the name was in use prior to that time (again, appended as a third name, or sometimes used in the place of the patronymic) then it was most likely a farm name. This database of Dutch surnames is a great place to start to determine where your Dutch surname is derived from.

Since the Netherlands also used patronymics prior to the 1811 law mandating fixed surnames, it is essential to prove each generational link, sometimes requiring court records, tax registers, and other local resources to find evidence connecting your family to the farm they lived on. 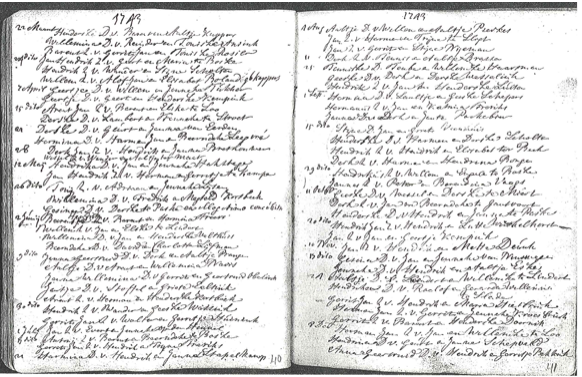 Despite the factors that can influence the use and meaning of farm names, armed with an understanding of such nuances and the availability of digitized records, now when you encounter a farm name in your research, you’ll be able to scale what could otherwise easily become a genealogy “brick wall.” So don’t delay—make hay while the sun shines, and get to work on discovering your family history! 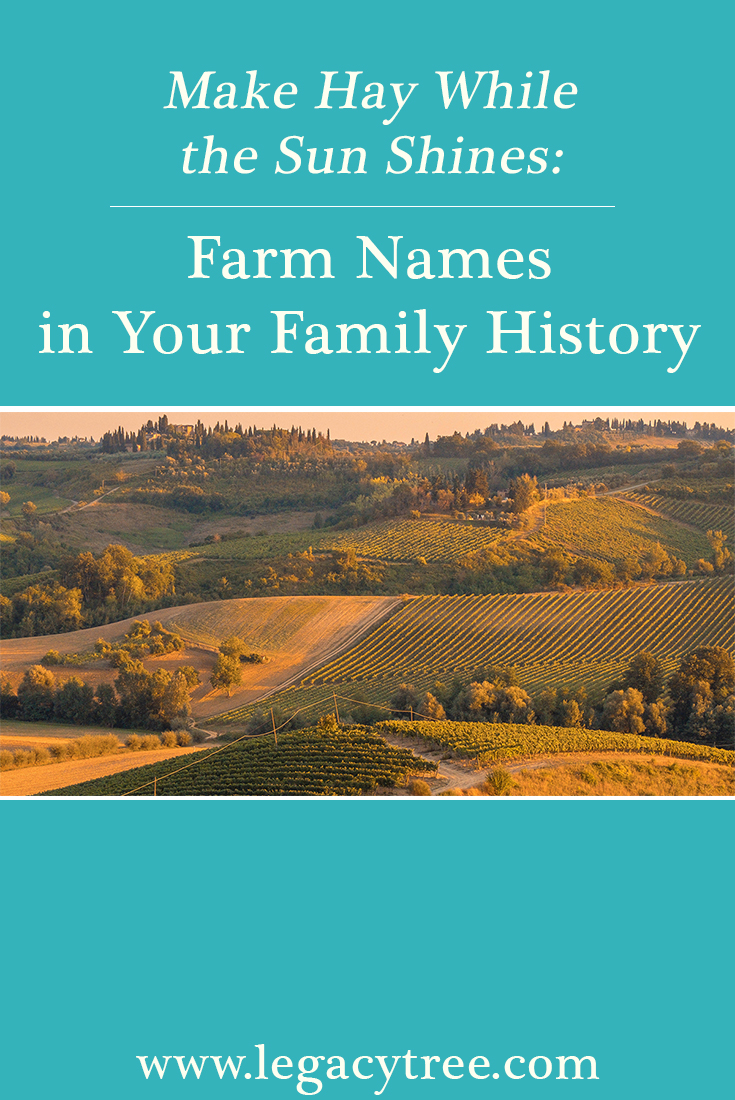 Previous article: The Who, What, When, Where, Why, and How of Y-DNA Testing
Next article: The Genealogy Research Process: 5 Steps to Maximize Your Research