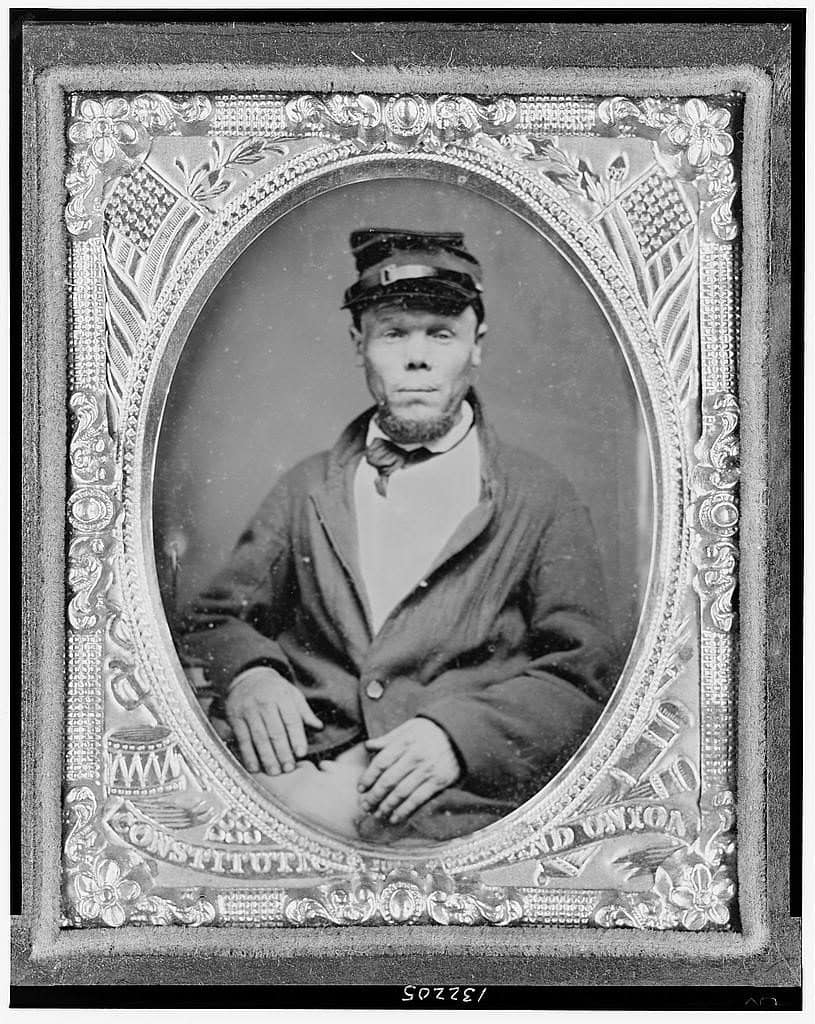 The Civil War was fought in the United States from 1861-1864, and approximately 622,000 Americans served on either the Union (Northern) or Confederate (Southern) side. Afterwards, a provision was set up for Union soldiers or their surviving dependents to receive pensions from the federal government, though the qualifications to receive one varied through the years. Until the 1890s, only those soldiers who had incurred an injury or permanently debilitating illness as a result of their military service (or the widows of those who had died in the war) could receive a pension. Near the turn of the century, the parameters were expanded to include any disabled former soldier, regardless of the cause of his disability. Finally, in 1906, government pensions were opened to all aged and needy Civil War Union veterans regardless of their health. In fact, according to the U.S. News and World Report, as of August 2016, one North Carolinian daughter of a Civil War veteran was still alive and receiving benefits. Irene Triplett, who was born around 1930, was the late-life child of a Civil War veteran (born 1846) and his decades-younger wife.

The pension index cards generated from Union pension payments are a boon to genealogical research for two reasons. First, the cards can contain names of dependents such as widows or children. Second, should you wish to access the actual pension file itself, the certificate number can be used to order it for a fee from the National Archives in Washington D.C. These packets can be upwards of 100 pages long and contain anything from copies of marriage certificates or family Bible pages to medical records and depositions of the veteran and/or his widow, family members, neighbors, and former comrades-in-arms. The level of detail is, in many instances, unparalleled among American historical records. You’ll learn not just about your ancestor’s military activities but about facets of his life not typically available anywhere else.

Here is where the tip comes in. At some point in the process of accounting for all the soldiers who applied and received Civil War pensions, two series of cards were created, both referencing the same soldiers but for slightly different purposes and with a different organizational strategy. One series was imaged by Ancestry (and FamilySearch) and the other by Fold3. The first set (from Ancestry) were stored alphabetically by soldier’s name, while the second set (from Fold3) were grouped by geographic and military units. Thankfully, since both sets are indexed, they are name-searchable which should not significantly impede a researcher looking for his/her ancestor, even if they don’t know in which exact unit he served.

As a researcher this duplication has its uses. Transcription errors do occur, but the exact error rarely happens by two different people. Consequently, it is helpful to have both cards to make sure that the numbers match. This number is required in order for the National Archives (NARA) to locate the proper file. If a request to pull the pension file is submitted to NARA and the wrong number is put on the pull slip, the request will be returned to you to correct – NARA will not hunt it down. Therefore, if the numbers are different on both cards, a researcher can look up the soldier on the microfilm index available at NARA or at Fold3 to figure out which number is correct before filling out the pull slip. This will save considerable time.

Another way that the index cards are helpful is that even without pulling the file, you can find out important information about the soldier. The Fold3 card will often (though not always) contain the soldier’s death date at the bottom. The Ancestry card will frequently include the name of the soldier’s widow or other dependents.

Here are two Civil War pension application cards for the same soldier, Cornelius Robinson, who served in the 1st Tennessee Calvary, Company F. The Fold3 card is on the top, the Ancestry card on the bottom: 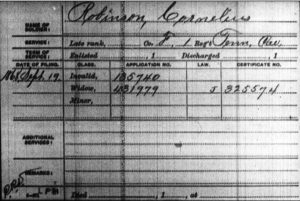 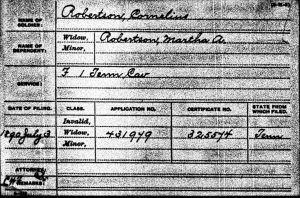 If the search for documents had stopped at the Fold3 card, the name of Cornelius’s widow, “Martha A. Robertson”, listed on the Ancestry card, would have been missed. Even though the soldier’s surname was spelled differently on each card, the widow’s application number, certificate number, and regiment tells us the cards are for the same ancestor.

There is one other number to be careful of on a pension card – and this concerns the set found on Ancestry.  If there is a number written on the bottom of the card beginning with a C or XC, that means that the pension file was still active after 1928 when those active files were transferred to the Veterans Administration. Over the years, many of these files made their way back to NARA after the pension was closed; however, some remained with the Veterans Administration, which subsequently sent those documents to the NARA facility in St. Louis, Missouri. A researcher should always first try to pull a C or XC file at NARA I in Washington DC, but if the C or XC files aren’t found there, the request needs to be made to St. Louis.

Lastly, for obvious reasons, the federal government did not offer Confederate veterans pensions, though most Southern states chose to do so individually. These are most often found in each respective state’s archives, though many have been digitized. For more details on these, see the National Archives website: https://www.archives.gov/research/military/civil-war/confederate/pension.html.

If you are searching for information about your Civil War ancestor, determining if your ancestor received a pension should be a top priority.

Let Legacy Tree Genealogists help you learn more about your military heritage, or break down a brick wall in your tree. Contact us today for a free consultation.