My great-grandmother Erika was German. She was adamant about the fact that she was German. After her arrival in the United States, when she was asked to fill out information about her place of birth, she indicated that she was born in Germany. Erika was born in 1921 in Waschulken. Today, this small town is located in northeastern Poland, however at the time it was part of Germany. Although borders have since been moved, she never stopped claiming she was German.

In the United States, many German immigrants were listed on various federal censuses and other documents generically as being from Germany. Instructions given to census takers for the 1870 census notes that the country of birth for individuals who were born outside the United States was to be listed “as specifically as possible.” In the case of those from Germany, census takers were to “specify the State, as Prussia, Baden, Bavaria, Wurtemburg, Hesse Darmstadt, &c.” This makes sense as the unification of Germany had not yet occurred. Instructions for the 1900 census however indicate that census takers should “not write Prussia or Saxony, but Germany.” Also, in the case of Poland, they were to “inquire whether the birthplace was what is now known as German Poland or Austrian Poland.” Thus, at least in theory, earlier census enumerations should indicate a more specific area or region rather than the generic “Germany.” In practice, some census takers still used “Germany” in lieu of a more specific place.

Later, the 1900 census for the Henry Blaeser household lists both husband and wife as being from Germany.

For more information on researching your German ancestors in census records, see our previous blog post, A New Development for German Census Records.

The unification of territories in January 1871 created the German Empire which lasted until 1918. Prior to the merger the area consisted of a multitude of separate kingdoms, duchies, and provinces. When an individual claims to have German ancestry they often mean that their ancestors lived within German Empire borders, although not necessarily only during the empire period. These borders were much larger than that of modern Germany with the most striking inclusion being a large portion of northern Poland. Even after the fall of the empire in 1918, it took many years for the borders to shrink to their current position.
https://en.wikipedia.org/wiki/Unification_of_Germany#/media/File:Deutsches_Reich_1871-1918.png

The concept of who is “German” and what areas are considered “Germany” have changed frequently over time, so it is vital to keep shifting historical boundaries in mind if you have ancestors who claim to be German as they may not be from the area of modern Germany.

How to begin tracing German ancestry

However, even knowing the province your immigrant ancestor came from is usually not enough information to begin researching in German record collections. You need to know the name of the town your ancestor came from. Although in some rare cases you may be able to identify your immigrant’s foreign hometown through indexes created from German collections, more often than not, traditional research will necessitate using church records, civil vital records, passenger lists, naturalization records, newspapers, and other such records in the country to which your ancestor immigrated in order to identify their place of origin. We also discuss additional resources available in our previous article, 3 Essential Website for Germany Family History Research.

Church records can be especially useful if the immigrant attended a church associated with their native language as these records often list foreign hometowns in marriage and death entries. For those with German ancestors of the Protestant Evangelical faith, accessing church records from many areas of Germany has gotten easier over the last several years. The book series German Immigrants in American Church Records is a helpful resource for those with German ancestors in Midwest region of the United States, offering a quick source to see if your immigrant’s name appears in the extracted records. 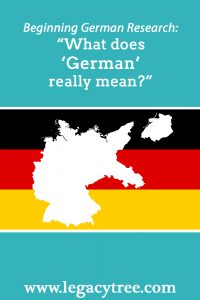 Newspaper articles including obituaries can also provide the name of the immigrant’s hometown. Where available, foreign language newspapers should not be overlooked as obituaries in such papers often provide additional details not listed in their English language counterparts. Check with local libraries or historical societies to see if they have copies of foreign language newspapers.

Other records for tracing German ancestors

Less obvious records such as wills on occasion list the town of birth so it is important to check all record types in search of the immigrant’s town of origin.

Once the town has been identified, church records and civil registration records (mandatory for the whole German Empire as of 1876), will be the most widely used sources for researching your German ancestors in Europe. As many of these records will be written in the antiquated German script, one will not only need to learn basic German genealogy vocabulary, but also learn to recognize those words written in the old script.

At Legacy Tree Genealogists, we have genealogists who specialize in German genealogy research and are skilled not only in identifying German hometowns of immigrants, but also in reading and analyzing old German church and civil records. We would love to help you trace your German immigrant ancestors back to their hometowns and extend their lines there. Contact us today for a quote!